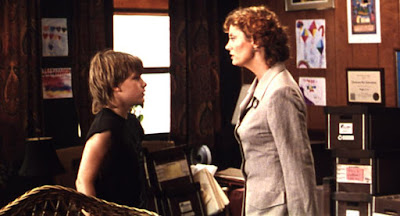 Courtroom drama is its own special thing. I tend to like courtroom dramas, or at least I’m predisposed to give them the benefit of the doubt. With The Client, we’ve got an hour of getting to the courtroom and then the courtroom, and just as soon as we’re in the courtroom, we’re out of it again. I suppose that makes The Client more of a legal thriller than a courtroom drama. We’ve also got mob hitmen, a dead lawyer, and a truly surprising cast. The Client is based on a novel by John Grisham, which means we’re in for high drama and lawyers being both villains and heroes. So let’s jump in with both feet, shall we?

Young Mark Sway (Brad Renfro) and his younger brother Ricky (David Speck) are out in a forest outside of Memphis killing off a summer afternoon smoking cigarettes Mark stole out of the purse of his mother (Mary-Louise Parker). Not too long after they arrive, a mob lawyer named Jerome “Romey” Clifford (Walter Olkewicz) shows up with the intent to kill himself by running a hose from his tailpipe into his car. Mark removes the hose, and when he tries to do this a second time, Romey catches him and drags him into the car. While Mark does manage to get out, he also manages to leave a number of traces of himself inside the Cadillac. He also learns the location of the body of Louisiana Senator Boyd Boyette, missing for about a month.

This sets of a whirlwind of activity. Since Mark is just 11, it’s not hard for the police to figure out that Mark knows a lot more than he’s telling. Since what Mark knows is potentially part of a high profile case, it also attracts the attention of the FBI and the Louisiana states attorney, a politically ambitious, scripture-spouting lawyer named Roy Foltrigg (Tommy Lee Jones).

Of course, Mark has also attracted the attention of the mob, particularly a man named Barry “The Blade” Muldanno (Anthony LaPaglia), the man responsible for the disappearance of the senator. Since he’s being watched by the FBI and the local authorities, he sends off his associate Paul Gronke (Kim Coates) to silence the kid. Gronke hires a local “investigator” named Nance (John Diehl) to help him locate Mark. It turns out locating Mark isn’t that difficult, since Mark’s brother Ricky has been effectively comatose since Romey’s suicide and is holed up in a hospital bed.

What’s a kid to do? Hire a lawyer, of course. He winds up with Reggie Love (Susan Sarandon), who takes the case for all of Mark’s money—a single dollar. And with that, she goes to bat for him, trying to keep him safe from the men trying to kill him and equally safe from the legal system that sees him as little more than a means to an end.

I wasn’t kidding when I said The Client has a surprising cast. J.T. Walsh, Bradley Whitford, Anthony Heald, and William Sanderson show up as members of various legal jurisdictions and the FBI. Will Patton shows up as a cop with surprisingly evil methods if not intent. Anthony Edwards gets a few scenes as Reggie’s assistant/clerk. We also get a couple of scenes from a not-yet-so famous William H. Macy as a doctor and from cinematic statesman Ossie Davis as the judge.

There’s a surprising amount of tension created in the film. A great deal of that is because Mark is a frustrating character, but he’s frustrating in a completely believable way. This is a kid who has been constantly kicked down by the world around him. His father was abusive and his mother far too young to have had him in the first place. He’s got real trust issues, and Brad Renfro plays it pretty well. Mark’s not an easy kid to like, but he’s a very easy person with whom to sympathize.

Where the film takes a bit of a wrong turn for me is not in the casting of Susan Sarandon (who is as good as she normally is) but in her character. Reggie is a recovered alcoholic who became drug-dependent and lost in a booze haze when her husband divorced her and took the kids in the custody hearing (taking the kids after writing her drug prescriptions and using that as evidence of her lack of fitness, no less). The story gets heavy-handed with her evident need to protect Mark as something like a surrogate parent. She’s certainly a lot more relevant to Mark through the story than his mother is.

Because of this, The Client ends up feeling a bit ponderous and overwrought. There’s no real need to give us this sort of pseudo-redemptive character arc for Reggie to become the mother she couldn’t be to her own child. Running from hitmen and dealing with aggressive state’s attorneys should be enough plot elements to make the story work. The Client suffers in that it seems to want to pack too much into the story to keep the audience interested, and it ends up being overkill and unnecessary.

Don’t get me wrong; The Client is a solid watch and a pretty good thriller. It’s hard to be the cast of immediately recognizable faces, many playing roles that seem very different from a lot of what they are better known for. It’s good and well-made, and demonstrates that Joel Schumacher could pull off a pretty good movie when he wasn’t playing for camp. But it still feels like there’s too much here, and trimming out some unnecessary emotional baggage would ultimately make for a cleaner and more easily digested drama.

Why to watch The Client: There’s a surprising amount of action and tension created in the plot.
Why not to watch: For all of that tension, it comes off feeling artificial.