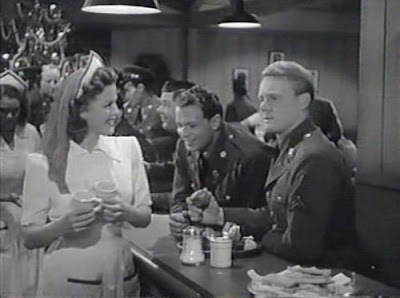 Propaganda films take all forms. The traditional war propaganda film is the sort that follows a group of “our boys” as they battle with grit, pluck, and determination against the pure evil of the enemy forces. There are other types, of course. Since You Went Away and Mrs. Miniver show the other side of the war—the home front, the keeping of the stiff upper lip and dealing with privation. The War against Mrs. Hadley tells a much different version of the war fought at home.

What’s the angle? The War against Mrs. Hadley comes from the least gung-ho perspective possible. The first thing to know is what the title actually means. Until the movie actually began, I thought this was about a war against the titular Mrs. Hadley. It’s not. It’s about Stella Hadley’s (Fay Bainter) attitude toward the war. In her world, the impact of World War II is entirely personal. The war, you see, is against her because it means that things will change in her world. Suddenly, she’s not the focus of everyone’s attention and there are things that might happen that will mean she doesn’t get her way.

Yes, that’s what we’re in for. Stella Hadley feels about the fact that World War II exists the same way that Ebenezer Scrooge feels about Christmas and poor people. And for about 76 minutes of its 86-minutes of the film, we’re going to have it hammered into our heads that Stella Hadley is a selfish upper class bitch who gives not a shit about anyone who isn’t her and then we’re going to get 10 minutes of Ebenezer Scrooge not having missed Christmas after all.

I’m not kidding, and I’m not exaggerating. The entire point of the film is to have person after person in Stella Hadley’s life come to the realization that the war is actually important beyond how it affects her life, not that it takes anyone else long to figure that out. One by one, all of the people who Stella depends on, and on whom she places demands caused by her privilege become involved in the war effort against her wishes. All she really wants is for nothing to change, and suddenly everything has changed, and in Stella’s world, it hasn’t changed for the better.

So, how about some examples? The film opens on Stella Hadley’s birthday in 1941 and anyone with an ounce of historical knowledge and the way movies work will have deduced that the date of that birthday is December 7 (which in a moment pure coincidence was actually Fay Bainter’s birthday). Her party is ruined by the attack on Pearl Harbor, and that’s exactly how she sees it. The most traumatic event that happens to her is that her maid (Dorothy Morris) breaks a piece of China. Why? Because her brother is stationed at Pearl Harbor. When she finds out later that her brother is alive, Stella’s reaction is to complain that the cup didn’t need to be broken after all.

Ah, but that could be shock. So here’s more. Stella disapproves of daughter Pat (Jean Rogers) working at a canteen for soldiers. When Pat falls for NCO Mike Fitzpatrick (Van Johnson) and the two get married, Stella disapproves so much that she doesn’t attend the wedding and cuts all ties with her daughter. Drunk-in-training son Ted (Richard Ney) is drafted and he accepts the assignment over Stella’s demand that he not join the service. Family friend and War Office honcho Elliott Fulton (Edward Arnold) refuses to pull strings to get Ted out of the service…and so Stella cuts all ties with him, too. She refuses to honor blackouts because they inconvenience her. She even gives up her friendship with Cecilia Talbot (Spring Byington) because Cecilia has had to terrible bad taste to take a first-aid class with Stella’s social rival Laura Winters (Isobel Elsom).

I won’t give the details of what happens in the last 10-15 minutes of the film. But if you guessed that in a general sense that Stella Hadley would undergo some sort of epiphany, well, you understand what a propaganda film is and you’ve watched or read A Christmas Carol at least once. There’s no shock here, and Stella Hadley’s new opinion on the war effort is, well, Scroogean.

There are some decent performances here. Mrs. Hadley’s butler (played by the incredibly butler-named Halliwell Hobbes) gets a few dandy comic moments and there are some interesting moments in dealing with the loss involved in war. But there is absolutely no shock where The War against Mrs. Hadley wants to take us, and no surprise that we’re definitely going to get there by the time the “Buy War Bonds at this Theater!” placard pops up at the end.

What I find very interesting here is that in some respects, The War against Mrs. Hadley is still a little bit relevant. Almost everyone knows that one person who is completely self-absorbed and who interprets every significant event in the world in terms of how it affects him or her, or takes attention away from him or her. In a selfie-obsessed culture, I think we have more Stella Hadleys now than we did in the past. But even with that said, this is still a film that is at best only a moderate success.

Why to watch The War against Mrs. Hadley: Good performances in spite of itself.
Why not to watch: Stella Hadley might be the most unpleasant, non-evil character in film.

Posted by SJHoneywell at 3:54 PM