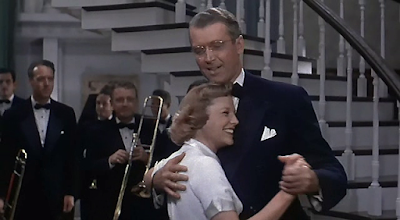 One of the problems I tend to have with movies made in the earlier days of film is that actors frequently played a lot younger than their real ages. With movies that take place over a long period of time, it becomes less and less of an issue as the film progresses, but it makes things a little harder to take. With The Glenn Miller Story, this is a problem that does go away eventually, but when we start out, our “a couple of years out of college” stars are 46 (James Stewart), 37 (June Allyson), and 39 (Henry Morgan). It’s a little rough to take.

No shock what this is about—we’re dealing with the important years in the life of bandleader Glenn Miller (Stewart), from his early days in 1929 to his death over the English Channel in 1944. Much of the early part of the film concerns Miller finding a way to translate the sound in his head to the page and then finding a way to put together a band to make that sound come to life. This is going to be mostly a warts-free biography and I think that’s okay.

The other focus of the early part of the film is the strange romance between Miller and his college girlfriend Helen Burger (Allyson). When the film starts, Miller has a business relationship with a pawnbroker (Sig Ruman). Miller works odd jobs to get his trombone out of hock when he gets a music gig, which he seems to lose immediately for wanting to use his own arrangements. He lucks into a job with his friend Chummy MacGregor (Henry Morgan) that takes them around the country, including Denver. Glenn takes a little side trip and meets up with Helen despite having not seen her for two years. They spend a day together and there’s an attraction there, but Glenn is off with the band, promising this time he’ll stay in touch.

Fast-forward to New York where Glenn leaves the band and stays in the city to work on his sound and study. Reminded of Helen by a song, he calls her and asks her to come to New York and marry him. And, well, she does. Glenn spends a couple of years playing in theater pit bands when Helen reminds him of the dream of the sound he once had. So he takes up his study again, and with Helen taking money out of his wallet, they soon have enough for Glenn to start his own band.

But, of course success follows, thanks to the timely intervention of a club owner in Boston named Si Schribman (George Tobias), who funds Miller to create a new band. When the trumpet player splits his lip open the night before the new band opens. Miller spends the whole night coming up with new arrangements, replacing the trumpet with a clarinet and discovering what would become the signature Glenn Miller Orchestra sound.

So it takes us about an hour to get to where we really want to get with The Glenn Miller Story, but once this new band takes off, we get a lot of Miller’s music. And holy shit is there some great music. In the Mood, Moonlight Serenade, String of Pearls, American Patrol, Pennsylvania 6-5000, Tuxedo Junction, Little Brown Jug. The man became famous for what he did because the man was golden with a tune. There’s a lot of music through the course of the movie, and not a bit of it is wasted. Even if this isn’t a sound that you normally listen to, I’m not really sure how someone could hear it and not admire it.

One of the things that really makes The Glenn Miller Story work is the tons of cameos from the real deal here—people who know and played with Miller during his early career and his heyday. Louis Armstrong, Gene Krupa, Cozy Cole, Ben Pollack, and a few other greats from that big band era make appearances here.

There are some nice little precursors to the music, too. If these parts of the story aren’t true, they’re the sorts of things that should be. Miller’s phone number in New York is Pennsylvania 6-5000. On his meeting with Helen in Colorado, he gives her a string of fake pearls for her birthday and then gives her a real string of pearls when he debuts the song.

As I said near the top, this is a warts-free biography. James Stewart’s Miller is an immediately likeable guy, much like Stewart tended to be likeable in his roles. The same is true for June Allyson, who is perky and irrepressible. I’m okay with this. Even if Glenn Miller was actually a terrible human being, it’s not the way we want to think of him. We want the guy who made all of this fantastic music—music that truly defined an era—to be a great guy. I want to like the guy.

Ultimately, The Glenn Miller Story is a decent film made much better thanks to some of the best damn music written in the last century.

Why to watch The Glenn Miller Story: The music is pretty great.
Why not to watch: It’s maybe a little too perfect to be that real.