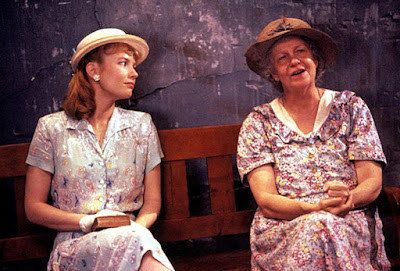 I don’t like the term “chick flick.” I think it’s kind of demeaning. That said, there are certainly movies that are produced with a female audience in mind. The Trip to Bountiful is not merely a film produced for women; it’s a film produced for older women. This isn’t a mom movie; it’s a grandma movie. Our main character is an older woman and the main villain in the story is her shrewish daughter-in-law. There’s no question that this was made for the over-60 set.

Our story begins in post-World War II Houston in the apartment of Ludie (John Heard) and Jessie Mae Watts (Carlin Glynn), an apartment they share with Ludie’s mother Carrie (Geraldine Page). Ludie has begun working again after an illness and Jessie Mae and Carrie are constantly on each other’s nerves. Actually, that’s not quite true. Jessie Mae seems to be constantly perturbed with her mother-in-law. She doesn’t like Carrie’s habit of singing hymns to herself, doesn’t like the fact that she “pouts,” and wishes Carrie wouldn’t run so much since Carrie has a heart condition. All Carrie wants is to return to the town where she grew up, a little place along the Gulf coast called Bountiful.

Evidently, Carrie has a habit of now and then holding onto one of her pension checks and attempting to get a train from Houston to Bountiful (apparently somewhere between Galveston and Corpus Christi) only to be regularly told that the train doesn’t stop at Bountiful anymore because there’s not much of a town there. This time, she outwits her son and daughter-in-law by heading to the train station and hoping a Greyhound that at least gets her in the vicinity of Bountiful, because the bus doesn’t stop at Bountiful, either. And as the name implies, we’re going on a trip to Bountiful, which means that Carrie successfully eludes Ludie and Jessie Mae and boards the bus with Thelma (Rebecca De Mornay), a young woman travelling to Corpus Christi.

Carrie has a couple of setbacks on her trip. She loses her purse at one point (but recovers it) and discovers that the one friend she had still in Bountiful has recently died. Ludie and Jessie Mae have also alerted the police to her disappearance, which means that the local law are aware of Carrie Watts’s disappearance and where she is likely headed. It’s not too long before a local sheriff finds her in a bus station looking to hire someone to drive her out to her old family home just so she can look around it one last time.

I said at the top that The Trip to Bountiful is a movie for older women, and it is, but that doesn’t mean that it’s not a good film or one worth watching. The primary reason to spend time with this is Geraldine Page. Carrie Watts is easy to like. She’s funny and spirited and just a little bit more clever than her shrew of a daughter-in-law. A little of this naturally comes from the screenplay, but most of it comes from the towering performance of Geraldine Page, who won an Oscar for this performance. Page is one of the somewhat forgotten (by current standards) giants of the cinema. She racked up eight Oscar nominations in a mere 28 performances, finally winning for this, her last nomination.

What makes Page so good in this is that for the first part of the film, we see Carrie only as a spry old woman who wants to return to her home to look around it. We sympathize with her completely because of how nasty Jessie Mae is to her. Once she gets on the road, the trip gives her a chance to reminisce about her life, and these memories are tinged with both nostalgia and the great number of losses she has suffered during the course of her life. While we like Carrie at the start of the film, by the time it ends, we don’t merely like her; we understand her. She wants what she wants, and mainly, she just wants to be treated with a measure of dignity no matter how she can come by it.

The other roles here are much smaller, and only appear for moments at a time. John Heard and Carlin Glynn are good in their roles, but they aren’t in the film much after the first half hour or so until the very end, when Heard really earns his money. Rebecca De Mornay is in the film for a solid chunk of time in the middle, and while her Thelma more or less exists as someone for Carrie to talk to, I like her in this role. There’s something about De Mornay at this stage in her career that works well for this sort of period piece. She looks good as someone in the late 1940s, and there’s something appealing about her wearing a pair of white travelling gloves.

The Trip to Bountiful is more wistful than I normally like my films, but I’m hardly the target audience for this. It’s not the sort of film I would typically choose to watch, and it’s not one I’ll likely watch again. It’s not made for me. But I am happy to have seen it, if only to see Geraldine Page take such complete command of a role. This is what it looks like when someone isn’t just acting a part, but really living it.

It’s also worth noting that Peter Masterson did a decent job in part of the film of making this feel like something more than a stage play adaptation. In the early scenes in particular—the apartment, the bus depot, the bus itself, and then in the second bus station—it feels quite a bit like it could be on stage. It’s at the end in an open field with a bright blue sky overhead that this really feels like a movie. It’s not a complete reimagining in that sense, but I’m always happy to see something along those lines in a stage adaptation.

Why to watch The Trip to Bountiful: Geraldine Page was a treasure.
Why not to watch: Assuming you’re not a 60-year-old woman, it might be difficult to get too excited about it.