Film: The Trespasser
Format: Internet video on The Nook. 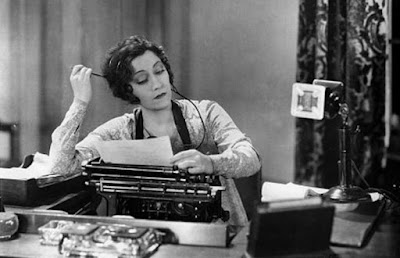 I’ve said it before, but it bears repeating: when I dip into the distant past on Oscar films, I’m never really sure what I’m going to get. In the case of The Trespasser, released in 1929 but eligible for the 1930 Oscars, I’m getting something that absolutely screams that it’s from the period just after the invention of talkies. Evidently, this was filmed originally as a silent movie and then rushed into talkie production when the world shifted to films with sound. It feels very much like that. The melodrama is so thick here that it appears to have been made with 50% tree sap. In its own way, it’s almost impressive just how many melodramatic notes it manages to hit.

Marion Donnell (Gloria Swanson, in her talkie debut) works as a stenographer for a lawyer, but as the movie begins, she is quitting her job. Why? Because she is eloping with Jack Merrick (Robert Ames), son of one of the most powerful men in Chicago. The two get married and spend a particularly blissful night together until the next morning when Jack’s father (William Holden, no not that one) shows up. Naturally he doesn’t approve of his son marrying a girl who actually has to work for a living and he’s convinced that Marion is a gold digger. He suggests an annulment followed by a change to introduce Marion to society. At least that’s what he tells his son. In reality, he’s going to do everything he can to destroy Marion, but she doesn’t give him the chance. She can’t convince Jack to walk out on the family money, so she walks out.

Before you can say “Doodley-doodely-doop” we flash forward a year and a half to discover that the wedding night was fruitful: Marion has a son she has named Jackie. She keeps this a secret from Jack and struggles mightily to pay her various bills. And then, just as suddenly, we see her in the company of her old boss (Purnell Pratt) from the start of the film. He’s married, but he’s stepping out on his wife with his old stenographer, who we’re led to believe has become a kept woman. When he dies suddenly in his wife’s arms but yelling Marion’s name, scandal hits the papers, and that scandal intensifies when it is revealed that Marion has been given half a million dollars in his will and (drumroll), Marion has a son. The world suspects that little Jackie is the son of her lawyer/employer/sugar daddy, but of course Jackie is not.

What follows is Marion attempting to get help from Jack Merrick without the interference of his father, who naturally interferes and still considers Marion to be a gold digger. The problems are compounded because Jack as gotten married in the meantime to a childhood sweetheart nicknamed Flip (Kay Hammond). Oh, but we’re not done piling on the melodrama here. On their honeymoon, Jack and Flip have a serious car accident that leaves Flip paralyzed and in a wheelchair. What’s Marion to do? She still loves Jack and he loves her. But Flip needs Jack as well. And who will protect little Jackie from the horrible men of the newspapers who want nothing more than to create scandal and destroy Marion’s life?

Like any melodrama, The Trespasser relies entirely on the idea that the people involved are either purely good or purely evil. In this case, pretty much everyone is purely good but flawed. Jack’s flaw is that he’s weak and easily led by his father. Marion’s flaw is her pride, which refuses to allow her to ask for help from anyone to the point of risking her own life to do what she is convinced is right. Over and over she is put in the position of being tempted by money, power, and love, and in each case she gives in to the temptation temporarily and then goes all noble. She’s ready to run away with Jack and Jackie until she meets Flip and is swayed by Flip’s superior love for Jack and complete selflessness. There aren’t enough violins in the world to play the soundtrack needed for any of this.

To top it off, The Trespasser comes with the most cobbled together, deus ex machina ending that could be conceived to give us a happy ending for our principle characters. It’s a complete cheat.

The truth is that the only reason to watch The Trespasser is to see Gloria Swanson at this point in her career. This was a massive hit for her, and her films, at least until Sunset Boulevard tanked terribly after it. She overplays the part, of course, but that was de rigueur for the time and completely expected. It’s a solid performance for its time, but not much else, and there’s really (no, really) no other reason to watch this. It’s pure sap and completely obvious with its emotional manipulation. If you’re into that, you could do worse than Gloria Swanson’s talkie debut. Otherwise, there’s not much here.

Why to watch The Trespasser: Gloria Swanson’s most successful film until Sunset Boulevard.
Why not to watch: It’s so sappy you could put it on pancakes.