You Always Hate the Ones You Love 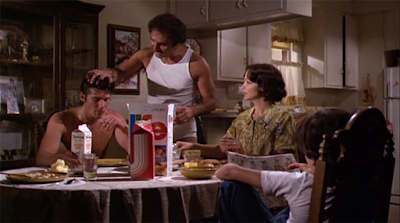 I try very hard not to be judgmental about the movies that I review on this site. I genuinely try to give every movie a fair shot. I knew Bloodbrothers was going to be an issue within the first couple of minutes. Bloodbrothers is about a family of aggressively Italian Americans. For the record, I am not Italian. My wife’s family is not Italian either. Additionally, my dad was a white-collar guy and it was understood that all of his kids were going to go to college. There’s a lot here that I have trouble relating to. That’s not the issue here, though.

It’s not the blue collar, electrician jobs on construction sites, the battle between father and son when the son wants something more than working construction, or the Italian-American vibe of pretty much everyone in the film. It’s the over-emotional nature of everyone involved. Everything in Bloodbrothers screams of parody to me—people aren’t really like this, are they? Is this stereotype taken to the extreme, or are Italian families really so shouty all of the time about everything? It’s such an oppressive environment; I was constantly uncomfortable.

Bloodbrothers is the story of Thomas “Stony” De Coco (Richard Gere), a recent high school graduate trying to figure out what to do with the rest of his life. His father Tommy (Tony Lo Bianco) and his uncle Louis “Chubby” De Coco (Paul Sorvino) assume that now that school is done, he’ll follow in their footsteps. Stony doesn’t really want to be a union electrician, but he feels pressured by everyone around him.

An added pressure is that Stony’s younger brother Albert (Michael Hershewe) has stopped eating, which is a constant source of tension. In fact, it makes his mother Marie (Lelia Goldoni) scream constantly. When Albert eventually collapses, is sent to the hospital, and is diagnosed with anorexia, Stony realizes that he might actually be good working in the hospital. He realizes this more fully when he goes back to the hospital to talk to Albert’s doctor after his mother has a full-blown freak out concerning her son’s diagnosis. Stony is offered a job working with kids and he snaps it up right away.

That same day, Stony’s father presents him with a union card and the two make a deal. Stony will work at the hospital for two weeks then work at the construction site for two weeks. After he’s had a taste of both jobs, he’ll make his decision. It’s a time of significant change for Stony—he dumps cheating girlfriend Cheri (Kristine DeBell) for Annette (Marilu Henner) and seems to feel more or less at home in both worlds. In the hospital, he discovers that he’s actually good with the kids and he gets a particular rush from working with them. But the construction site—while it doesn’t have that rush—gives him a connection to his father, his uncle, and with what is more or less a family tradition.

There’s a lot here in terms of themes that are worth exploring and that are potentially very interesting but that are made incredibly unpleasant by the characters involved. It’s evident that both Tommy De Coco and Louis De Coco are serial adulterers. When the alternately hysterical and angry Marie De Coco tries to get retribution, she gets beaten up by her husband in retribution. By the time we get to this in the film, it’s not surprising. This sort of constant domestic violence and fear is something we’ve come to expect from both of the De Coco parents.

Bloodbrothers has a hell of a solid cast all the way through, even in some very small roles. Danny Aiello shows up for a couple of minutes, as does Robert Englund, Kenneth McMillan, and a host of other notable character actors. But I can’t help but feel that most of them are wasted in a movie that is really unpleasant all the way through. I want to like Stony De Coco, but I have trouble actually liking anyone in the film. The standard modes of conversation seem to be either tears, fists, or shouting, and I find the entire thing oppressive.

It’s a shame, too, because there is a story here. The idea of finding one’s own way even if that means disappointing our parents or living a different dream from theirs is a classic story and one that could be very interesting and worth seeing. It’s hard to find that value, though, when everyone who is telling us that story spends the entire movie like an emotional wound.

Why to watch Bloodbrothers: Richard Gere before he hit it big in American Gigolo.
Why not to watch: These people are awful.