Off Script: The Sender

Film: The Sender
Format: Internet video on The Nook. 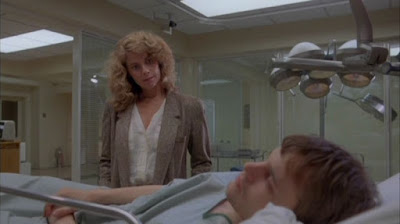 Not long ago, Paramount released a bunch of video clips of their movies on YouTube. Even better, they released a couple of hundred movies (or so—I don’t know the exact number) full movies, free to the viewing public. If you’re someone who worries about things like film piracy and illegal downloads (and you should be), the Paramount Vault is a great find. It’s entirely above-board, ince the upload to YouTube are official. Among the many movies now available for free is The Sender.

The Sender is a weird little film. With a little more gore, it feels like it could easily have been made by David Cronenberg, since it has some of his trademark ideas of messing with the head of the audience. It’s also the first film role, or at least the first notable one, for classic character actor Željko Ivanek, who is almost unrecognizable because of his youth and a full head of hair.

Sherman, set the Way-Back Machine to 1982. One fine summer day, a young man appears on a beach where families are picnicking. He fills the pockets of his jacket with rocks and walks out into the lake in an evident attempt to drown himself. Panic ensues and the young man is take to a local mental institution for observation. The young man in question evidently has amnesia and is dubbed John Doe 83 (Željko Ivanek). His case is assigned to Dr. Gail Farmer (Kathryn Harrold).

It’s soon evident that John Doe is a special case. Other patients are affected by his presence, particularly one man who believes himself to be Jesus and calls himself the Messiah (Sean Hewitt). Dr. Farmer starts having strange incidents as well, something like waking dreams. That night in her home, she is convinced that someone is trying to break in—she hears breaking glass and distinctly sees John Doe in her house taking the necklace that she wore that day at the hospital. But when the police arrive, no windows are broken and the necklace in question is in her room.

Dr. Farmer’s boss, Dr. Denman (Paul Freeman, immediately recognizable as Belloq from Raiders of the Lost Ark--same era, after all) determines that John Doe is a sender, someone capable not of reading the minds of other people, but of sending his thoughts to others. Several of the patients in the institution are susceptible to John Doe’s abilities, as is Dr. Farmer. It’s left unexplored whether this is because of her closer contact with him or some other aspect of her personality, but Dr. Farmer’s life starts to become a blend of actual experiences and things that seem real but are clearly the product of John Doe’s mind. She gets a visit from a woman (Shirley Knight) who claims to be John Doe’s mother, but no one else seems to have seen her, for instance. She also believes herself to be pursued in her car by John Doe, but there is no other vehicle behind her.

There are some very solid scenes. The single best moment in the film comes when Dr. Denman decides to put John Doe in for electroshock treatment. What follows is a staggering amount of chaos—bodies flung into the air, mass hallucinations from the patients, and a much more general realization that the strange behavior from Dr. Farmer perhaps isn’t caused by her own mental deterioration, but the fact that there is something unique and different about John Doe 83. Based on this scene—it’s built up to nicely and occurs right around the middle of the film, I had high hopes for the conclusion.

Sadly, that hope isn’t realized. While there are some very good moments in The Sender, the last half hour or so of the film doesn’t really capitalize on the ideas built up in the first hour. The idea that what is happening to Dr. Farmer at any time could be real, could be a warning, or could be the ravings of John Doe’s mind is well established through that first hour, but this devolves into something not nearly as coherent for that last half hour. The film tries and tries hard, but it simply can’t sustain the ideas it has for the full running time.

I can’t help but be a little disappointed in it. It’s got some good ideas that it can’t sustain. I think it’s worth a watch, but this is a movie that could have been and should have been a little better than it ended up being.

Why to watch The Sender: The first hour builds up some solid tension.
Why not to watch: The last half hour is a bit incoherent and a let-down.