This is the second in a series of twelve movies selected by Chip Lary. 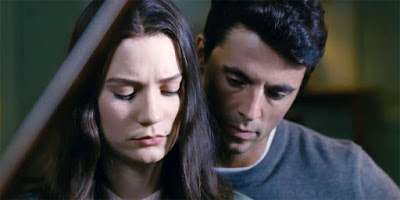 Plenty of movies explore the idea of insanity and evil. It seems like a natural place for movies to go, at least in the genres of horror and thriller. Stoker is a film that is exploring that same idea and seems to also want to look into the possibility that not just insanity but evil may be genetically linked. It’s an intriguing idea, and in the case of Stoker, it’s an idea that is played out in a way reminiscent of Shadow of a Doubt.

India Stoker (Mia Wasikowska) loses her father (played in flashbacks by Dermot Mulroney) in a car accident the day she turns 18. Her mother Evelyn (Nicole Kidman) is naturally upset, but her level of anguish seems greatly tamped down by the sudden appearance of her late husband’s brother Charles (Matthew Goode). Charles claims to have been traveling around the world, mainly Europe for years, but upon his brother’s death has come to stay with the family.

India has her own particular issues. She’s socially withdrawn and suffers from something like an autistic sensitivity to sensations. This does make her hyper-aware of her surroundings, though, and there’s a great deal of which to be aware with the arrival of Charles. The family housekeeper Mrs. McGarrick (Phyllis Somerville) has an argument with him and suddenly disappears. Evelyn’s Aunt Gin (Jacki Weaver) arrives, says that she wants to talk to Evelyn and India about Charles, and she just as mysteriously disappears as well.

If you’ve seen Shadow of a Doubt, there’s no real mystery to what happened to Mrs. McGarrick and Aunt Gin, and it’s not much of a spoiler, since we’re made privy to this at about half an hour in. This isn’t a film that wants to hide that Charles is really like, since it’s not about that. It’s more about how India processes the realization of what her uncle is and why he acts the way he does. Even more, it’s about her reaction to Charles’s actions. Let’s just say that they are…atypical.

There’s a lot here that works. One of the better aspects of Stoker is that it makes evil in the person of Charles both charming and seductive. It’s not difficult for just about anyone (anyone but Evelyn, perhaps) to see that there’s something a little off about Charles, and yet it’s also impossible not to see that there is a certain magnetism to the man.

I also like the way that it’s filmed. Chan-wook Park is an interesting and creative director, and a great deal of what makes Stoker work in some of the more aggressive scenes is that he freely mixes shots of what is happening with quick, related flashbacks. In a sense, it’s a way to explore what is going on inside the head of the characters, particularly India. What we see is, in a sense, is her experiencing an event but experiencing it through the lens of a previous event. It’s interesting and effective. It’s a little off-putting at first, but quickly becomes something easy to follow.

There’s also a touch of Tarantino here, and it’s one of the things I tend to object to most in Tarantino’s films. There are too many characters here that exist in a sort of amoral universe, Tarantino’s movie reality of virtually everyone being a criminal, including the tangential characters. There is a scene of a near-rape of India by a classmate, and while that does play into the plot (although not nearly enough in one sense—sorry, I’m trying to avoid spoilers here), it also seems like something that happens specifically to drive the plot. It’s not something that happens naturally in the course of the movie. I found that really unpleasant and unnecessary. There were other ways that what needed to happen in the film could come about without a rape sequence.

There’s a lot here that I think is worth appreciating, but ultimately Stoker left me feeling like India—cold, detached, and not really emotionally involved. I think I appreciate what Cahn-wook Park did with it more than I liked it, but I think enough of it to recommend seeing it. Chip, you’re 2 for 2, but only just kind of.

Why to watch Stoker: Deadly family drama.
Why not to watch: The emotional detachment is carried too far.

Posted by SJHoneywell at 2:26 PM