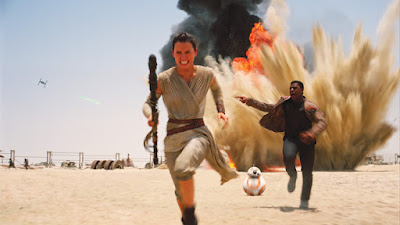 There are benefits to seeing a huge release on opening weekend. No need to avoid spoilers. There are smaller, but no less real, benefits to seeing something for the first time weeks later. One of those benefits is that you get the theater pretty much to yourself. I finally went to see Star Wars Episode VII: The Force Awakens at a late show last night. There was only other person in the theater with me. No screaming kids, no rabid fanboys. Just the movie, and that’s pretty great.

My relationship to the Star Wars franchise is that of many. I’ve been hurt by it. It was my first cinematic love. I saw the original nearly 20 times in the theater as a 9- and 10-year-old, going literally every weekend to the second-run theater in my home town the summer of 1978. I loved The Empire Strikes Back more. It was darker and more disturbing and, as a good middle section of a long story should, put the heroes as low as they could go and the bad guys has high as they could. I liked The Return of the Jedi even if it was the least of the original trilogy (damn Ewoks).

Then came the news that the prequels would be released. Like just about everyone, I stood in like for The Phantom Menace and went in with high expectations. And it…wasn’t very good. In fact, it wasn’t very good to the point that I still haven’t seen the two that followed it. There were other movies to watch and I simply haven’t gotten around to them, although I keep telling myself that I will. But there’s so many complaints about them that I’ve found it difficult to work up the enthusiasm to do so.

And it has. There’s a lot that Episode VII gets right. There’s that sense of high adventure again, and a return to the feeling of destiny in the characters. One of the better aspects of the original trilogy that I missed as a kid was that feeling of overriding fate pushing the story forward. There’s a sense of real adventure here, of people being thrown into something over their heads and having to cope with it as best they could. There’s also a return to what feels like a real malevolence in the Dark Side, and that’s good as well. We’re given fully-fleshed characters here—people who make decisions not because the plot demands them to, but because it’s essential to their characters.

If nothing else, I had forgotten just how effective that opening is. There is something really wonderful about that blue text on a black screen followed by the massive orchestra hit and the text scroll. It’s not Star Wars without that, and for a few moments at the start of the film, it really was like recapturing those moments of the first time I saw the original as a kid.

There are a lot of nods to the original trilogy here, and they work well in the story. If you don’t know the story (and yes, there are people like that) these nods won’t mean anything, but for those of us who lived and died with Luke, Leia, and Han 40 years ago, it’s great to see the weird tracking system of the guns on the Millennium Falcon, mentions of making the Kessel Run in 12 parsecs and the like. It keeps so much that made the originals great; there is nothing in the cinematic universe that sounds like a TIE Fighter, and having that sound return is an immediate tie back to my childhood.

The Force Awakens ties the new trilogy into the original one well, and that’s needed since there is a great deal of character continuity from that trilogy. Getting so much of the original cast back—Harrison Ford, Carrie Fisher, Mark Hamill—and going to the extent of getting the people encased in costumes to reprise roles is really great. No one would know if Peter Mayhew was in the Chewbacca costume, but he is. Since Anthony Daniels actually speaks, it was evident that he was back in the C3PO costume, and that’s more continuity that fits in nicely.

It’s also well cast. New characters Rey (Daisy Ridley), Finn (John Boyega), Poe Dameron (Oscar Isaac), and new droid BB-8 are the characters we want to watch. This is especially true of the Rey/Finn combination. This is good because they’re the main characters here. Of the three, I’m the least enchanted with Poe Dameron, who comes across as maybe a bit too confident for my tastes. He’s almost Han Solo’s personality with Luke’s skill set, and I’m not sure I buy it. John Boyega, though, is fantastic as Finn, someone we immediately root for. The same is true of Daisy Ridley’s Rey, who will be fueling the nocturnal emissions of many a teen for the next few years. Beyond that, though, Rey is a character who does what Hollywood thinks can’t be done—be a female character who will be immediately embraced by young boys. I think lots of 9- and 10-year-old boys will happily and seamlessly identify with Rey.

New bad guys Kylo Ren (Adam Driver), General Hux (Domhnall Gleeson), and Snoke (Andy Serkis) are really malevolent, and Kylo Ren manages to be both evil and conflicted. I am hopeful that we’ll get more of Captain Phasma (Gwendoline Christie) in the next two.

I haven’t talked plot here at all, and that’s with reason. Almost everyone (or actually everyone) who reads this has already seen The Force Awakens and there’s no need to cover it. Also, I managed to go six weeks or more without any major spoilers (well, I caught wind of one) and I’d rather not even risk dropping a spoiler here just on general principle. No one spoiled this for me, and I don’t want to even think about betraying that trust, even now when I’m probably the last person who sees this page to see the film.

So, it’s good. Star Wars Episode VII: The Force Awakens is exactly what it claims to be—a solid return to the original trilogy and characters. It’s a fun space opera with a good mix of old, familiar faces and new ones that will become the heroes of a new generation of fans. It doesn’t hold the same magic for me as it did nearly 40 years ago. Let’s be honest; it couldn’t. But it tries and it gets a lot of it right.

Why to watch Star Wars Episode VII: The Force Awakens: Some of that original magic is still there.
Why not to watch: It’s not the same. Admittedly, that’s not the movie’s fault.

Posted by SJHoneywell at 9:26 AM