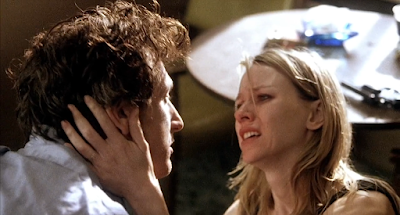 The movie 21 Grams gets its name from the apocryphal story that the human body loses 21 grams at the moment of death, making some believe that this is the weight of the soul. There are a bunch of bad assumptions and fallacies at play here, but I’m not going to go into that, because that’s not the point. It’s worth mentioning, though, because it gives us a pretty pretentious title for the film, and that’s a theme that’s probably going to be explore pretty thoroughly in the next few paragraphs.

21 Grams was the middle of Alejandro Gonzalez Inarritu’s informal trilogy, smack in the middle of Amores Perros and Babel. As the middle film, it tells a smaller story (like Perros) but attempts to tell it in a grander, sweeping style (like Babel). Because of this, I’m not sure it works at either of these two things.

Like the other two films, 21 Grams is a series of interconnected narratives with the lives of different people impacting on each other in unforeseen ways. None of the stories makes sense without the others, but there is more or less a way to get something like a coherent tale here. Jack Jordan (Benicio del Toro) is a former convict who has straightened himself out with religion. One night, on his way home, he is involved in a hit-and-run accident in which he kills a man and his two daughters.

That man’s wife is Cristina Peck (Naomi Watts), a former drug abuser now in treatment. Both of her daughters are killed essentially at the scene while her husband is rendered braindead. She agrees to allow him to be used for organ donation. His heart goes to math teacher Paul Rivers (Sean Penn), who had about a month to live without a new heart. Paul and his wife Mary (Charlotte Gainsbourg) have recently gotten back together. During their separation, Mary had an abortion that she didn’t tell him about and now she is desperate to start a family. Paul hires a private detective to discover where his heart came from, which causes him to start following Cristina around town. And eventually, he and Cristina decide to hunt down Jack Jordan and kill him in revenge for what he did to Cristina’s family.

All of this is a pretty compelling story. The issue is that 21 Grams appears to have been edited by taking large chunks of film stock, throwing it up in the air, and putting it back together in whatever order the pieces were picked up in. It’s very modern and chic to go with this sort of non-linear editing and it’s something that is often used very effectively. Here, though, it simply gives too much away. There are too many places where we know what is going to happen in a scene because of what we’ve been shown earlier in the film.

We know relatively quickly the circumstances of the death of Cristina’s family, so when that scene—her husband walking with the girls and leaving her a message on her phone—shows up, there’s no shock of what is about to happen, only the dread of potentially having to see it. We know very early on that Jack and Cristina are in a car together rushing Paul to the hospital, so there’s no mystery about what’s going to happen when Paul threatens to (and apparently does) shoot Jack in the head.

Both Naomi Watts and Benicio del Toro were nominated for their performances, Watts for Best Actress and del Toro for Best Supporting Actor. Both are good and believable in the performances, and Sean Penn is good as well. But in service of what? IMDB categorizes 21 Grams as a thriller, but there are no thrills to be found here, since we are repeatedly given the resolution to important scenes before we see those scenes themselves. It’s a constant game of flipping to the last chapter to see what’s coming and then going back to see how everything got there.

I am evidently in the minority of my blogging community for liking Babel as much as I did. I’ll probably take the same heat for not liking 21 Grams as much as a lot of people seem to. Is it that it was artsy and edgy for 2003? Is it that Inarritu was doing something completely new 13 years ago that today feels pointless in terms of how the film was edited? I’m not sure (although that’s what the comments are for; knock yourself out). This seems like something that is more or less a straightforward and interesting story (a man tracks down the wife of his transplant organ donor and then tracks down the man who killed his heart donor) “spiced up” with liberal editing that seems designed to do nothing but make the straightforward story needlessly convoluted.

I don’t normally get bent out of shape when it comes to film editing, but this is a case where I think it made the final project a lot worse. Telling this story front to back, perhaps with a flashback or two for context, would’ve ended up making this a much stronger (if no less depressing) film.

Why to watch 21 Grams: Strong performances from a great cast.
Why not to watch: It has editing ADHD.