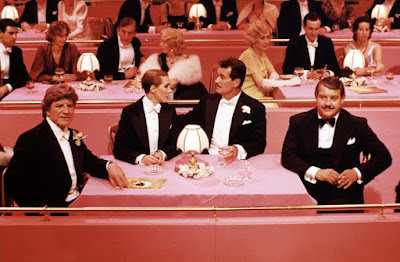 Before I get into discussing Victor Victoria, I should comment on Julie Andrews, the film’s star. I’m not a huge fan of Mary Poppins and my hatred for The Sound of Music is the stuff of legends, but I won’t put any of that at the feet of Julie Andrews. Even if those two roles are glurgey and saccharine, I can’t fault the woman herself. The reason for that is that she also did Victor/Victoria, which demonstrates that Julie Andrews is the definition of an entertainer. Holy crap, but the woman is good.

The set-up here is critical. In 1930s Paris, Victoria Grant (Julie Andrews) is a literally starving singer who can’t find work. She’s to the point of being willing to sacrifice her virtue for a meal when she hits on a plan—she’ll snag a cockroach from her apartment, go to a restaurant, eat a massive meal, and then slip the insect into her food so that she doesn’t have to pay. While she’s involved in this, she meets Carole “Toddy” Todd (Robert Preston), a self-described aging queen and cabaret performer who has just lost his job and is out of money. Through a series of events the pair escape paying for their meal. Victoria’s clothing is ruined by the rain, so she borrows a suit from Toddy’s former lover Richard (Malcolm Jamieson). When Richard comes to claim his things, he sees Victoria and assumes that she is a man. This gives Toddy a brilliant idea.

In short, he cuts Victoria’s hair and takes her to see agent Andre Cassell (John Rhys-Davies), passing her off as a gay Polish count named Victor who is a female impersonator. So, essentially, you have a woman playing a man playing a woman. Sort of. This is really where the plot has a problem, because there is no way that anyone would ever really mistake Julie Andrews for a man. Ah, but that’s okay.

On the night of “Victor’s” debut at a posh club, Andre has invited hundreds of people including King Marchand (James Garner), mob-connected owner of several clubs in Chicago. King is immediately smitten with Victoria and shocked when the “reveal” is made that Victoria is actually drag queen Victor. In fact, King doesn’t believe it, although his ditzy girlfriend Norma (Lesley Ann Warren) and his bodyguard “Squash” Bernstein (Alex Karras) buy into it completely. What follows is King’s attempt to prove that Victor really is a Victoria so he doesn’t feel guilty for being attracted to a man. And since he’s going to be romantically involved with someone who is publically male, this is going to have implications for his mob ties, Victoria’s career, and even his relationship with the secretly gay Squash Bernstein.

So, okay, the central conceit of Victor Victoria doesn’t work at all because Julie Andrews couldn’t pass for a man if the director used heavy CGI. And you know what? It doesn’t matter at all. While that doesn’t work, it doesn’t play into the movie a bit because everything else here is done just about perfectly. For starters, Victoria’s stage numbers are fantastic and evidence that Julie Andrews could still knock a number out of the park and play sexy as she approached 50. Even if the rest of the film was terrible, it would be noteworthy for just how much she kills it on stage. Fortunately, there’s a lot more here, too.

Both Robert Preston and Lesley Ann Warren received Supporting nominations for their roles here. Lesley Ann Warren is good, even if the role is relatively small. I’ve said before about other people in other roles that it takes someone very smart to play dumb really convincingly, and she does it well. But Preston is fantastic. He does a couple of staged numbers as well, and I could watch Toddy perform a complete show and never get bored. Preston is funny and honestly makes his act feel like he’s both rehearsed and doing improv at the same time. His final number is laugh-until-you-cry funny.

It’s also a good film for James Garner and Alex Karras, who are both entertaining in their roles. Karras in particular is a great combination of tough and vulnerable. Garner—always a lovable rogue—is spot on here as well. It’s easy to understand King Marchand, who is forced to hang out in gay clubs to keep up Victoria’s public persona, and who then goes and gets in fights to demonstrate his own masculinity to himself. He spends a good deal of the movie with black eyes and bruises that happen specifically to reinforce his own persona not to the audience but to himself.

Everything, or at least everything beyond people thinking Julie Andrews is male, works here. The script takes a great premise and milks it for everything it can. For those interested in show-stopping tunes, you’ve got three or four to enjoy, any of which would rank as some of the best of the decade. It’s funny, it’s fun, and it’s even progressive for 1982 in the way it treats gender and sexuality.

Victor Victoria is exactly the sort of movie I started doing this blog to watch. I’d have never picked this up a half dozen years ago, and here we are, with it being one of the best things I’ve watched in a month.

Why to watch Victor Victoria: Great musical numbers and a fantastically fun plot.
Why not to watch: Julie Andrews couldn’t pass for a man to a blind audience.