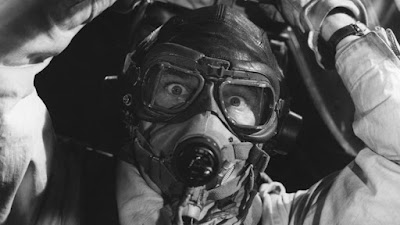 A week ago, the only Ann Todd film I had seen was Things to Come and I can’t say I remember her in it at all. Here I am watching my second Ann Todd film in three days. Funny how this seems to happen. There’s something very striking about Ms. Todd. Every time I see her, I think she belongs in something produced by Val Lewton. I don’t know if it’s the way she’s lit in these films or the way she looks at the camera, but she belong in something like Cat People or I Walked with a Zombie. But here she is in The Sound Barrier (also called Breaking the Sound Barrier and Breaking through the Sound Barrier).

The Sound Barrier is an indubitably British film about, well, attempting to break the sound barrier. It’s not going to be a huge shock that the sound barrier gets broken here, but let’s also remember that this bit of British propaganda for jet aircraft is highly fictionalized. While it’s certainly true that British aircraft companies and pilots worked on the problem of getting past the speed of sound, The Sound Barrier definitely wants to imply that the British got there first. I have three words to say to that: Chuck Goddam Yeager.

No film from the 1950s appears to be complete without a touch of romance, so that’s where we’ll start. Military pilot Tony Garthwaite (Nigel Patrick) has fallen for Susan Ridgefield (Ann Todd). As it happens, Susan is the daughter of aircraft manufacturer Sir John Ridgefield (Ralph Richardson), which makes his being a pilot almost a necessity. Tony proposes, the pair are married, and, after the marriage, are off to meet Susan’s family and for Tony to check out the massive Ridgefield facility and huge house. This also gives us a chance to meet Susan’s brother Chris (a so-young-he’s-almost-unrecognizable Denholm Elliott).

Chris is working on becoming a pilot so he can join the RAF. He’s not much of a pilot, though, and doesn’t like flying, but it’s unheard of that a Ridgefield male shouldn’t sit in a cockpit. On his first solo flight, he augers in. Naturally, Susan blames her father’s insistence on Chris being a pilot for his death. Sir John seems unphased by his son’s death and offers Tony a job as a test pilot once the war is over. Sir John is obsessed with jet aircraft (a new thing in the waning years of World War II), and with overcoming the sound barrier.

While the film gives us some drama in the family dynamic between Susan, Tony, and Sir John, the real drama here is about the speed of sound and the very real problems encountered when trying to get a plane past it. In fact, one of the better aspects of the film is the low-tech, layman explanation of why the sound barrier exists. Sir John explains it at dinner—there is a limit at which air can move, and when a plane attempts to move faster than that, the air simply can’t get out of the way of the plane, effectively “bunching up” in front of it, forming something akin to, well, a barrier.

In terms of the more personal drama, the real action is between Susan and her father. Susan sees him as cold, distant, and domineering. When she suggests to Tony that they move out of the family home, Tony reluctantly agrees, Sir John puts a stop to it, saying that he’ll fire the person who sells his home to Susan. All of this eventually pays off in the third act, of course. That tension is necessary for much of the film to work. Sir John’s nature is also seen in his relationship with Will Sparks (Joseph Tomelty), his chief engineer. Sparks, after a few setbacks, wants to retire, but Sir John knows what buttons to push to keep him coming back into the fold.

It’s also worth noting that there’s a little bit of propaganda here for air travel. At one point, Tony needs to get a plane down to Cairo. He and Susan fly down and have lunch with Tony’s old air force friend Philip Peel (John Justin) and his wife Jess (Dinah Sheridan). After a quick lunch, the pair are back in Britain for dinner. Ah, the joys of modern travel, popping down a couple of continents and home again in a single day. Philip eventually joins the Ridgefield firm as a test pilot as well—no sense in wasting a good character.

There’s a lot about The Sound Barrier that comes off as predictable, but not all of it is. The second act ends with a solid surprise. Really, though, it’s about the pursuit of this dream of flying faster than the speed of sound. David Lean does yeoman work on the flight shots. Some of them almost certainly are rear projection shots, but a lot of these appear to be actual flight sequences, and they look really good, especially for 1952. In fact, I’m a touch surprised it wasn’t nominated for its cinematography. Lean uses his camera inventively, tilting shots of people on the ground to mimic the actions of the pilots in the air above. He uses camera angles to suggest flight and height--it's actually easy to see Lean learning a lot about his use of camera here for many of his later epics.

The Sound Barrier is never going to replace The Right Stuff on my list of aviation films, but it’s a damn fine bit of film, not the least because of the excellent work of Ralph Richardson and Ann Todd. Much of the rest of the cast is serviceable (Joseph Tomelty is entertaining), but Richardson and Todd really make the whole thing work. Well, that and the flying sequences.

Why to watch The Sound Barrier: It’s like The Right Stuff: The Early Years.
Why not to watch: Chuck Goddam Yeager.

Posted by SJHoneywell at 6:35 PM