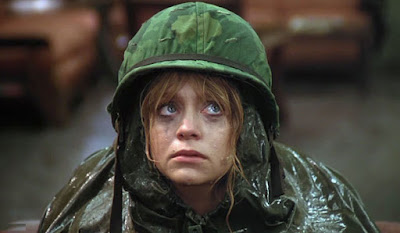 Despite an earlier Oscar nomination and a win, it wasn’t really until Private Benjamin that Goldie Hawn took control of her career. This was her first foray into producing, a decision she apparently made to give herself more control over her career. It’s not at all ironic that Private Benjamin is about a woman discovering who she really is after a lifetime of being told what to do. I can imagine that there was a great deal of personal satisfaction in making this film, and a great deal more when it ended up so critically acclaimed.

The film starts by telling us that Judy Benjamin (Goldie Hawn) has only really wanted one thing in life—to marry a professional man and spend her time making sure her servants did their work. After a failed first marriage, she is set for the life she believes she wants to live, marrying Yale Goodman (Albert Brooks), a lawyer. Sadly for Judy (and Yale), six hours into the marriage, Yale dies of a heart attack. Now adrift with no one to take care of her and nothing to do, Judy is convinced by a slick Army recruiter (Harry Dean Stanton) that joining up will be like a paid vacation. She enlists, and discovers that the Army isn’t what she thought it would be.

Private Benjamin only works because it takes some license with what we’re forced to accept in the character of Judy Benjamin. When it turns out that the Army is actually the Army and not a private condo with yachts, Judy wants to leave. The fact that her recruiter lied to her makes no difference to anyone, though. For the first week or so, things are as bad as they possibly can be for Judy. Her fellow recruits hate her for screwing up and getting them punished and she’s a constant target of Captain Doreen Lewis (Eileen Brennan, who was nominated in a Supporting role). It’s not until her parents show up to take her home with Captain Lewis’s full blessing that Judy turns things around. It’s at this point, after being berated by her father for not being able to make a good decision on her own that Judy elects to stay and gut out the next five weeks of boot camp.

Things turn around during a war game exercise. Judy and a few other recruits are sent off to guard a swamp as a form of punishment by Captain Lewis. They get lost, though, and wind up encountering the base of the other team. Thinking quickly, Judy and her comrades change their arm band color using one of the recruits’ underwear. They capture the entire enemy base, including Captain William Woodbridge (Craig T. Nelson), who is busy “interrogating” Private Wanda Winter (P.J. Soles). Judy and the others essentially bring back the entire enemy force to their own camp, effectively winning a decisive victory. However, since Captain Lewis believed that Captain Woodbridge was her main squeeze, this action only increases the enmity between them.

After graduation, Judy is assigned to an elite troop on the base, but soon discovers that this is because the base’s commander finds her attractive. She uses this to net a plum position in Belgium, where she continues an affair with a French doctor named Henri Alan Tremont (Armand Assante). Eventually, she’s forced to choose between her military career and him, and ends up making a decision that validates the entire premise of the film.

It’s been a good 35 years since Private Benjamin was a current film, and age hasn’t been entirely kind to it. This is considered one of the best comedies made, and that may have well been true if it’s taken in the context of 1980. Today, though, not a lot of the humor really comes through as laugh-out-loud funny. Don’t get me wrong; Private Benjamin is a well-made comedy, and there are still parts of it that work. But it’s a plot that feels very dated in a lot of ways. The idea of a woman who has been more or less completely ornamental her whole life might still have some traction today, but it’s lost a great deal of its comedic appeal.

Hawn, though, is excellent. It would be easy to play this broadly throughout, and there are certainly parts of this that venture into that almost slapstick, just shy of screwball comedy. But she doesn’t stay there. The Judy Benjamin who graduates from boot camp is not the Judy Benjamin who shows up there. That Judy would never have stood up to sexual harassment. By the end, she’s someone fully capable of taking care of herself, not just in her own mind, but in the mind of the audience as well.

I want to say a few words about Eileen Brennan as well. Brennan had a great career on the screen. She was a fantastic comedienne, gifted in a way that few are. I can think of a number of movies where Eileen Brennan was integral and solidly funny. This was her only Oscar nomination. I’d have loved to have seen her nominated more often, but I’m happy she was nominated for this role.

Why to watch Private Benjamin: It doesn’t look like it at the start, but it’s pretty progressive.
Why not to watch: Like many comedies, it hasn’t aged very well.