Film: Chef
Format: Streaming video from NetFlix on The Nook.

This is the first in a series of twelve movies selected by Nick Jobe. 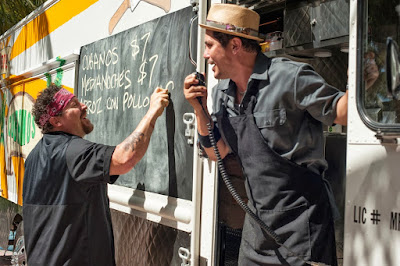 One has to be careful when watching a movie in which food is a major plot point. Go into them too hungry and all you can focus on is the food. Go into them too full and the food just makes you a little ill. Chef has been on my radar for about a year, and with Nick adding it to my list this year, there was no time like the present. But again, there’s that worry. I love food a lot. I don’t eat to deal with pain in my life or to compensate for issues. I eat because I fucking love food. To compensate while watching Chef, I made dinner for my family—chicken in an onion and tomato sauce with carrot and parsnip fries. It didn’t help that Chef made me hungry, but at least I got to eat as soon as the movie was done.

Chef Carl Casper (director Jon Favreau) is plying his trade at a well-thought of restaurant, but he’s not particularly happy about the idea that he’s not really doing anything new with his craft. He’s also struggling to maintain a relationship with his son Percy (Emjay Anthony) and something like a relationship with his ex-wife Inez (Sofia Vergara), who is inexplicably wealthy. When an influential food blogger with the foodie-inspired name of Ramsey Michel (Oliver Platt) arrives, Carl clashes with restaurant owner Riva (Dustin Hoffman) about the menu. Riva insists on the classics that made the restaurant famous instead of Carl’s more interesting and inventive choices.

Of course, the review ends up as a poor one, specifically calling out Carl Casper as someone who has settled down rather than pushing his craft further. Percy shows Carl the basics of social media, specifically Twitter. Carl calls out Ramsey on Twitter and suddenly he’s got thousands of followers. Ramsey returns to the restaurant, Carl walks out and then explodes at the table. Suddenly he’s a meme and his career is ruined. On the advice of Inez and hostess Molly (Scarlett Johansson), he heads to Florida for a change of scenery. It is here that he meets with Inez’s other ex-husband Marvin (Robert Downey Jr.), who gives Carl a beaten up food truck. When Carl’s friend and fellow chef Martin (John Leguizamo) shows up to help, the decision is made. Carl and Martin (and eventually Percy) will get the truck set up and drive it back to Los Angeles, serving food along the way.

So, really, the plot of Chef is over in a lot of ways once the truck gets set up. While a lot of the film is about the food being presented, it’s really about the relationship that Carl has with his son. Food and working on the food truck becomes the way that Carl has to connect to Percy; it’s his chance to give his son a few life lessons and to bond with him. There aren’t a lot of surprises in where this goes, of course, but Favreau and Anderson play it honestly and believably, so it ends up working pretty well.

There are some real issues with Chef, though. First is the fact that there’s not really any rising action that leads to a conclusion. Once Carl, Martin, and Percy have the food truck cleaned up, what follows is more a food-filled travelogue across the country than anything else. You could call it a quest for some sort of redemption in the case of Carl getting his career back, but again, there’s not a great deal of question whether or not that’s going to happen.

There’s also a lot of stunt casting here. Favreau has been involved in movies with a lot of the bigger names here, so it’s not a stretch to suggest that Scarlett Johansson and Robert Downey Jr. showed up for their one or two scenes, got scale, and did it as a favor to Favreau. I called out those two in particular because they’re the most egregious examples of this slightly-more-than-cameo appearance. Downey has a single scene, and he more or less plays a sleazier, less wealthy Tony Stark. Johansson’s character appears initially as a potential love interest for Carl and then vanishes from the film, never to be heard from again.

Beyond that, I don’t buy Carl Casper being that clueless about social media. He has no idea how even the most basic elements of social media and technology work. My mom has a Facebook page, and my dad emails me from his iPad. I find it difficult to believe that someone that interested in his craft has no ability to network.

There’s a lot to like here. The characters are good, for starters. But really, Chef is all about the food, and the food is beautiful. Carl makes some stuff that looks truly amazing starting with his Cubanos. If you’ve never had a Cubano…go get one. It’s a sandwich you’ll want to experience before you see them made. The food really is gorgeous here, and as should be the case, it’s the food that takes center stage.

Even though there’s not much plot at the end, it’s a worthy watch. Nice choice, Nick. You’re 1 for 1.

Why to watch Chef: The glorious, glorious food.
Why not to watch: Stunt casting.