The Girl Can't Help It 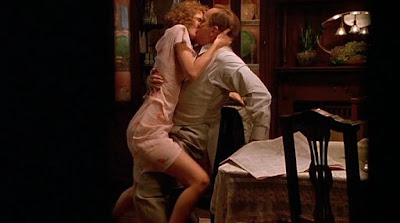 Movies can show us things both terrible and beautiful. When we’re given something awful to see, at least in my opinion, the context matters. I love horror movies, for instance, but I’m not a fan of gratuitous gore. Use well, gore can really add to a movie. Used poorly, it’s there for cheap shocks and fan service. Rambling Rose is not a horror movie, but the analogy still holds. Within the first half hour or so of the film, a minor is sexually abused, and the film doesn’t really seem to care much or think that it’s a real issue.

I don’t want to start a rant here, but this is something that really bears talking about. I’m not a fan of seeing the sexual abuse—or any abuse—of children in a film. However, there are times when it is legitimate for the story, and as unpleasant and terrible as it is, I understand why it is a part of some films. To me, it ranks as one of the worst things a human being can do, but it’s also a sad fact of reality that it happens. Depending on the film, that can be a real place to go. When it’s trivialized or, as happens in the case of Rambling Rose shown as something akin to a positive, I mentally and emotionally shut down in terms of the rest of the film.

During the Great Depression somewhere in Georgia, the Hillyer family takes in Rose (Laura Dern) as a servant. They take her in mainly because Rose is directly on a path to prostitution through no fault of her own, the film would have us believe. Rose is sexually promiscuous and naïve at the same time. The film depicts her natural sexuality as something completely organic and simply not under her control. Put more simply, Rose finds men irresistible and she herself is evidently irresistible to men as well. Thus it is not much of a surprise when shortly into her tenure in the Hillyer family she develops an interest in Mr. Hillyer (Robert Duvall).

One night when Mrs. Hillyer (Diane Ladd) is out at a meeting, Rose makes a play for Mr. Hillyer’s affections. This is initially reciprocated to the point of partial nudity and just as quickly avoided. Hillyer tells Rose to redress herself and do the dishes and that he will not cross that particular Rubicon in the future (okay, so he actually references Thermopylae, but it’s the same intent). Little do Hillyer and Rose know, but two of the Hillyer children, Willcox “Buddy” Hillyer (Lukas Haas) and Frances “Dolly” Hillyer (Lisa Jakub) have seen the entire exchange through a crack in the door.

That night, Rose sneaks into Buddy’s room and climbs into bed with him. What follows is not full-blown sex, but it’s close enough. It’s worth noting here that Buddy is about 13. At this point, a little past half an hour into the film, I pretty much checked out emotionally.

There’s quite a bit more going on in the film. Rose’s promiscuity starts to become an issue for Mr. Hillyer. Mrs. Hillyer either approves of it or is completely oblivious to it. It’s worth noting here that Mrs. Hillyer is an intellectual and a scholar, and one imagines that a decade or so before the movie takes place, an active suffragette. There’s a lot of “girl power” in Mrs. Hillyer’s character. She is very much of the “a woman’s place is in the House and the Senate” mentality. That’s daring for the 1930s in which the film takes place, trendy in the early 1990s, and old hat today, although that’s hardly the fault of the movie. It’s worth noting, though, because it does call into question Mrs. Hillyer’s position on Rose’s behavior. It’s entirely possible within the context of the film that Rose fully endorses Rose’s active sexuality, perhaps up to and including the molestation of her own son. A woman needs to do what she needs to do appears to be Mrs. Hillyer’s guiding principle, and damn the cost or the consequences.

Okay, so there’s evidence that Rose herself was sexually abused as a teen, since we eventually discover that she’s got an ovarian cyst because of a case of gonorrhea that has gone untreated since she was 15. I don’t think that’s an adequate excuse for what happens between her and Buddy.

And again, depending on the context of events like this, it can very well be a legitimate place for the story to go. But the abuse of Buddy is viewed in the film as something that stirs Buddy’s feelings for Rose, feelings that stay with him to the early 1970s when part of the film takes place. Couple this with the idea that we’re supposed to be rooting for Rose and the jaunty, Terms of Endearment-y soundtrack, and I’m left watching a film that hasn’t simply lost its moral compass, it’s willfully and gleefully smashed it.

And for all this both Laura Dern and Diane Ladd were given Oscar nominations (Actress and Supporting Actress respectively). Ick. Child molestation doesn’t deserve a jaunty soundtrack. These people are loathsome.

Why to watch Rambling Rose: You’re a completist.
Why not to watch: No one seems to really mind much about the sexual abuse of a minor.