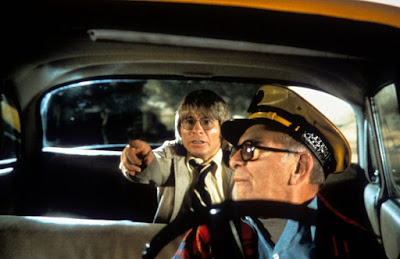 When you are making a movie that has God as a character, it’s an important casting decision, and an easy one to screw up. Morgan Freeman, for instance, was an inspired decision. I’ve got to hand it to the makers of Oh, God! as well, because in 1977, I’m not sure there was a better choice to play the role of God than George Burns. Actually, the casting is really nicely done all the way around here, even if it seems strange at first blush in a few places.

Oh, God! is a high concept film. I love summarizing these because they’re so short and convenient in summary. God decides that the world needs to be made more aware of his presence, so he appears to the assistant manager of a grocery store in Tarzana, CA. It’s a pretty fun high concept, even for an apostate like me.

So let’s go into a little detail here. That assistant manager, Jerry Landers (John Denver) isn’t a religious man, and considers himself a non-believer. This doesn’t stop the almighty from deciding that he is the right person to spread the word that humanity has everything it needs to make the world better and that it’s up to people to do the work and make those decisions. Jerry’s job, according to the Big G, is to spread that message as much as he can. This should be simple, according to God: Jerry just has to tell people. God, it would seem, is a bit naïve in thinking that the world will simply accept the words of a new modern-day Moses. After all, Jerry can’t even convince his wife Bobbi (Teri Garr).

In fact, at first Jerry can’t convince himself. Not even God’s ability to meet Jerry on the 27th floor of a 17-story building does the trick. When God makes it rain inside Jerry’s car, though, Jerry is finally convinced. The word starts to spread slowly until it’s picked up by several news outlets. Suddenly Jerry is the 1977 equivalent of an internet meme. His home is a magnet for religious nutters and somehow he manages to be invited to appear on the Dinah Shore show. So the word starts getting around. A collection of theologians puts Jerry to the test. This culminates in Jerry calling out a pompous, powder-blue suited preacher and ending up in court with God appearing on the witness stand.

The most interesting thing about Oh, God! is its theology. The god that we are presented with here is a curmudgeonly joy, capable of great feats but not really understanding why they are necessary. He’s possessed of a unique sort of omniscience. He knows everything that has happened and that is happening, but has no knowledge of the future. After all, in this version of the deity, the libertarian free will that is suggested by Christianity is a real thing. He’s a very Unitarian version of an almighty power, the kind who seems to just want everyone to get along and doesn’t even really seem that put out about how much people believe as long as they’re doing the right thing.

He’s also a fallible deity, complaining that he shouldn’t have made ostriches or the pits in avocados as large as he did. He claims to have made Adam and Eve as teenagers, thinking that would be middle age for them, and also stating that it’s impossible for children to fall from grace. He can’t spell, either. He’s a bit of a grouch, but would actually be a fun guy to hang out with.

I’ve not be shy about my own lack of belief on this blog, so what I’m about to say needs to be read carefully. If I did believe, the deity presented here is the sort I would be most comfortable believing in. He’s a decent guy. In fact, this is sort of the god I was raised with in a very liberal Christian church. This is a god who doesn’t fully understand us (who really understands his or her children completely?) but he wants to, and just wants everyone to be happy.

I mentioned above that the casting here is excellent, and it really is. John Denver, with his blonde bowl cut, thin round glasses, and mild twang comes across as a completely believable everyman. Teri Garr is also nicely cast as his bewildered, but wanting to be supportive wife. The film is also filled with great cameos. Donald Pleasance, Ralph Bellamy, David Ogden Stiers, and Williams Daniels each have a scene or two and a few lines.

Oh, God! also has a lightly humorous touch. God’s business cards are blank, save the word “GOD” written across the middle. When he appears as a cab driver to give Jerry a lift, his hack license is labeled “GOD” as well (and expires 12/31/77). It’s rarely laugh-out-loud funny, settling instead for sweetly charming. Sure, it’s not a perfect film. When George Burns makes something appear or disappear, it’s easy to see the edits, for instance. And so what? These little technical gaffes are easy to overlook for the sake of the jokes being made.

Oh, God! is fun and funny, and has the sense to end in a believable way for a film that contains the actual presence of a deity. It’s a happy ending, but not a perfectly happy one, and it works for the tone of the film. Almost surprisingly, I’m glad I saw this.

Why to watch Oh, God!: It’s genuinely funny and entertaining.
Why not to watch: If only an almighty being could be this accommodating.