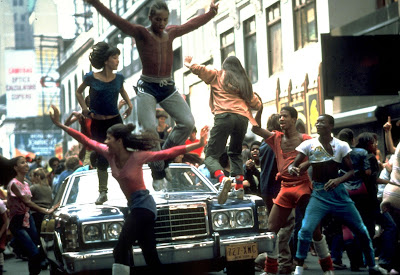 Anyone who knows me knows me knows about my girls pretty quickly. Most parents are proud of their kids, of course, and like most parents, I’m extremely proud of my kids. I think I have reason. My older daughter is 17 and a college junior. She was invited into the dance program during her sophomore year in high school, and she finished high school a year early. My younger daughter was just accepted into the Joffrey Ballet’s five-week summer program, an offer made to 150 students nationwide. So, based on the fact that I live in a world of ballet, jazz, and tap, it’s surprising that it’s taken me this long to get to Fame.

Fame follows four years of students at a New York high school for performing arts. The students spend their mornings working on their specialty—acting, dance, music—and the afternoons on academic subjects. It’s no surprise, though, that this is not going to be a drama about chemistry or English. No, we’re going to be dealing with drama all about, well, acting, dance, and music. We’re presented with a standard variety pack of students with the standard variety pack of issues. To whit:

Montgomery (Paul McCrane), an acting student. He’s got a mother who is a famous actress, a psychoanalyst, and has come to the realization that he’s gay.
Doris (Maureen Teefy), another acting student. She has an overbearing mother (Tresa Hughes) who is the classic stage mom.
Ralph (Barry Miller), a third acting student. Ralph is a class clown who doesn’t have a filter.
Lisa (Laura Dean), who starts as a dance student but ends up in drama when she’s booted from the dance program. Why is she booted? She doesn’t try hard enough.
Hilary (Antonia Franceschi), a dance student. She shows up in the second year and is sexually aggressive.
Leroy (Gene Anthony Ray), a dance student. Leroy is black and illiterate and hates school, but loves dance.
Bruno (Lee Curreri), a music student. Bruno hates performing in front of others and is convinced that his thousands of dollars-worth of synthesizers is the future.
Coco (Irene Cara), music, dance, and acting. Coco wants to do it all. She’s also in competition with Hilary for the attentions of Leroy.

Anyway, Fame tracks their lives over their four years of high school. There are naturally a few spontaneous song-and-dance numbers that almost seem like they work in terms of the narrative of the film. The most famous of these is the one to the title track, a song created in the film by Bruno and broadcast from his father’s taxi without Bruno’s knowledge. The students end up blocking traffic and dancing on people’s cars.

And this highlights the main problem I have with the film. There is a significant air of non-reality associated with Fame that it can’t get away from. Frustrated by his English class and his English teacher (Anne Meara), Leroy goes out in the hallway and smashes a shit-ton of glass front bookcases. He is evidently not punished for this. In fact, he is evidently never punished for swearing at his teachers, never showing up prepared, and never doing any of his homework, because, y’know, illiterate. When the kids dance in the streets and are jumping up and down on people’s cars, there are no repercussions, either. No penalties, no lawsuits, no damage reports or insurance claims. Hey, if you’re young and talented, evidently you can get away with whatever the hell you want.

That unreality is cemented by the fact that not a one of these people looks age appropriate. Throughout the film I had to remind myself that these are high school students—and remember, we see them for all four years of high school. This means that at the start of the film, these are supposed to be 14-year-olds, and not a one of them looks under 20. If this had been about a performing arts college, I’d have at least bought this part of the story. High school? Not a chance in hell.

Additionally, the dialogue simply doesn’t work. In their sophomore year, the students are required to relate a personal story about a terrible event in their lives. These scenes are so scripted that the come across as, well, a scene out of a play. Nobody talks like these kids do about their own experiences. This is especially true of 15-year-olds. Actually, check that. You know who talks like that? Screenwriters and playwrights.

And because of all of this, I just can’t buy it. I’ve seen both of my daughters deal with many of the issues brought forward in Fame. I’ve been there for days spent in school and nights spent on a dance floor, long drives home and getting to bed close to midnight only to get up at six for school the next morning. I’ve seen the petty infighting when someone gets a better part than someone else and feelings get hurt. I’ve seen the struggle between needing to learn a part and needing to study for an exam, and knowing that both are of equal importance to a young student. Fame attempts to create that world and fails at it. It also gets weirdly dark in junior and senior year—attacks by junkies, abortion, and soft-core porn are all on tap in the last hour.

It’s not a bad film and I understand why it became popular in 1980 and why it was remade a few years ago. But for me, it’s like when Neil Degrasse Tyson complains about bad science in movies. The immediate disconnection to reality prevents me from the necessary suspension of disbelief of something that purports itself to be the real world. It ruins the film for me, and that’s kind of a shame.

Why to watch Fame: A spin on a classic story.
Why not to watch: It has about as much connection to reality as Abraham Lincoln: Vampire Hunter.