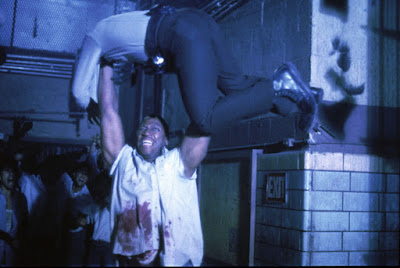 There’s a sense with any list of films that advertises itself specifically as containing obscurities of the listmaker(s) putting things there specifically because they are obscure. It’s not so much a measure of quality as it is a measure of “let’s show how much I really know.” In the case of Prison, there’s a little bit of that. On the other hand, this is a film directed by no less than Renny Harlin and starring Viggo Mortensen at an early stage in his career. So, while it’s pretty obscure, it’s got a slight pedigree.

As the title suggests, this takes place in a prison. Specifically, this was filmed in a dilapidated old prison in Wyoming, and evidently used actual convicts for a number of the convicts in the film. We start 20-some years in the past, witnessing the execution of an inmate for a reason we’re not told. One of the people witnessing that execution is Sharpe (classic that-guy Lane Smith). This will become important eventually.

Flash-forward to the present and the news that evidently prison reform is not on the current Wyoming governor’s re-election platform. This means a reopening of the defunct Creedmore Prison where the original scene took place. Prison reformer Katherine Walker (Chelsea Field) is against the use of Creedmore, particularly when she sees just how beat up the old place is. Sharpe is put in charge of the place as the warden, and his plan is to have the inmates revamp the place and put it back into shape.

However, since this is a horror movie, the spirit of the man electrocuted in the opening scene is still living in the prison and is out for revenge. Specifically, he wants revenge on Sharpe, who was there at his execution. So, it’s not too far into the film when we realize that we’re dealing with (of course) an angry spirit back to avenge itself from the dead. Sharpe may be the ultimate target here, but this restless and angry spirit is happy to take out its vengeance on anyone who gets in its way, including other inmates and prison guards.

One of these inmates is Burke (Viggo Mortensen), who seems to twig to the fact that something isn’t right pretty quickly. His cellie Cresus (Lincoln Kilpatrick) has a connection to the older incarnation of Creedmore as well, something we don’t learn until the last few minutes of the film. And this is the biggest problem with Prison. There’s a lot of potential backstory here that simply isn’t well used, defined, or even included. All of this seems completely random until the last few minutes of the movie, and even then, a lot of what we’re given as explanation is really incomplete.

Prison’s evil spirit’s powers seem to presage what Wes Craven did with Shocker. He’s got some sort of power over electricity, which might explain why he blows up a few computers, including the one owned by Katherine Walker. And we get some sense that this spirit wants its wrongful execution investigated. And yet the end of the film happens before any investigation can be started. Katherine starts poking around, discovering that an inmate was executed just before the prison shut down, but before she can really go any further, the end of the film is upon us.

Because of this, Prison feels like the basic idea for a story filmed before anyone went through it and decided to add things like detail and plot points that would make it comprehensible. It’s more or less a series of gory deaths roughly attached to the prison that happen for no reason other than “angry spirit” until the last 15 minutes or so of the movie. And when we get an explanation, it’s just dumped out in dialogue in a couple of lines. It’s really unsatisfying.

There are a couple of decent gore moments here, but not much else. All of the characters are pretty one- and two-dimensional (at best), and by the time we get to the end, we don’t really know anything about anyone. All we know about Burke, for instance, is that he stole cars, seems like a decent guy despite this, and has an Elvis-style duck’s ass haircut. All we know about Katherine is that she things Creedmore is unfit for human habitation and that something should be done about it. There’s no reason to give a shit about anyone in the film.

Why to watch Prison: Pre-Aragorn Viggo Mortensen.
Why not to watch: The story doesn’t make much sense and isn’t given any reason to.

Posted by SJHoneywell at 6:40 PM