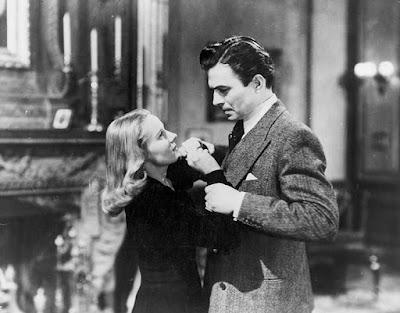 Sometimes I play coy in my first paragraph or two when it comes to the film I’m reviewing. I might suggest that I really liked the film when I didn’t, or hint my opinion one way or the other. I’m not going to do that for The Seventh Veil because this is a film that doesn’t deserve that kind of respect from me or from anyone else for that matter. I’m also going to spoil the hell out of this movie, so if you’re game to track this down and spend 90 minutes watching it, you’ve been warned. I am going to lay all its secrets bare and there’s nothing you can do to stop me, save from not reading further.

Why am I being this cruel to a 70-year-old film? Because The Seventh Veil is a perfect storm of terrible elements. It contains in roughly equal parts misogyny, physical and emotional abuse, Stockholm syndrome, incest, an actress in her 30s playing a 14-year-old, and egregious psychobabble. Evidently this passed for quality screenwriting in the mid-1940s, but today it does nothing but frustrate me. How in the hell did this pile of abusiveness and bad psychiatry win Best Original Screenplay?

Let’s roll from the top. Troubled concert pianist Francesca Cunningham (Ann Todd) has escaped from a local hospital and thrown herself into a nearby river in a vain attempt to kill herself. Now back at the hospital, it is up to Dr. Larsen (Herbert Lom) to figure out the root of her psychosis and cure her…if he is able.

What follows is an hour-long flashback sequence of Francesca under hypnosis going through her formative years. This is the section where the 36-year-old Ann Todd plays a 14-year-old schoolgirl. She and her friend Susan (Yvonne Owen, who was 23 playing 14) play hooky from school one day and get in trouble. Francesca’s punishment is to have her hands beaten with a ruler despite having to audition for a piano scholarship that same day. Naturally she fails, and never gets another chance to audition again because her father dies and she is given into care of her “uncle” Nicholas (James Mason), who is actually her second cousin. Nicholas is a confirmed bachelor and a woman hater; Francesca is the first female to enter his house. He discovers that she has talent on the piano and spends the next several years grooming her for stardom as a concert pianist. In fact, when Francesca falls in love with musician Peter (Hugh McDermott), Nicholas drags her off to the continent for further training, ending that romance as soon as he discovers that Francesca has gotten engaged without his consent.

Nicholas is essentially a Svengali for Francesca, who seems to have no will of her own when Nicholas is involved. Susan shows up again and proves herself to be a flighty, wealth-obsessed nothing who interrupts Francesca debut to call attention to herself. Eventually they return to England where Francesca discovers that Peter has become a bandleader and has gotten married. Francesca becomes a piano workhorse with Nicholas as slave driver. Eventually, Nicholas contacts artist Max Leyden (Albert Lieven) to paint Francesca portrait. During this process, Francesca and Max fall in love and she makes plans to leave with him. In retribution, Nicholas beats her on the hands with his cane shouting that if she won’t play for him, she’ll never play for anyone else. She leaves anyway, and she and Max are in a car accident where her hands are burned slightly. All of this has convinced her that she’ll never play the piano again and that she should die, hence the suicide attempt.

So what’s the cure? Well, Dr. Larsen has us covered. He needs to find out all of the underlying stuff that has led to Francesca’s current psychosis. Guess what it is. No, really, go on and guess. The good doctor discovers that Francesca is actually madly in love with Nicholas, the guy who has never been nice to her and who screwed her up in the first place. The guy who is her second cousin. Seriously, fuck me.

There’s not a moment of this film that didn’t make me feel oily watching it. It’s not just the incestuous relationship that we know will happen after the credits roll, but the constant mental and emotional abuse heaped on Francesca by Nicholas throughout the film. This is someone who is the embodiment of an abuser. He tells her repeatedly that he’s done everything for her and made no demands on her, that everything he has done is for her, and yet he controls every aspect of her life completely. After telling her that she is free to do as she wishes, he then tells her what she will do for the next few days down to where she will eat. It’s repellent. Francesca is the classic battered wife and, by the end of the film, is happy to be battered.

Is there a good point here? I suppose there is. The Seventh Veil was a massive success by all standards. A 2005 book ranking the 100 most popular films in UK history ranked by the number of theater seats sold placed this film 10th of all time. Additionally, it made James Mason a major star, so it’s got that going for it.

Beyond that, though, it’s been a long time since a film has made me feel this unclean watching it. On a final note, the name of the film is a reference to Salome’s dance of the seven veils. In Dr. Larsen’s metaphor, Salome dropped her seventh veil voluntarily, but the mind of everyone has veils as well, but refuses to drop the seventh one and stand naked in front of another person. Only through hypnosis can the seventh veil be dropped and the patient treated. What a serious pants-load.

Why to watch The Seventh Veil: It has James Mason in it.
Why not to watch: Everything about it is horrifying.