Film: The Prince of Tides
Format: DVD from NetFlix on laptop. 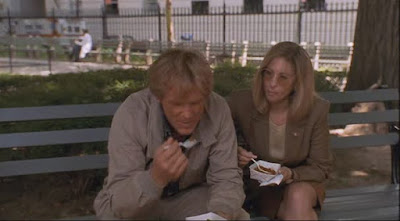 I wasn’t 20 minutes in with The Prince of Tides when I realized it was going to be one of “those” movies. The Prince of Tides would, by most standards, be called a “women’s” movie. It’s about relationships and feelings and things coming out in psychotherapy. It involves emotional breakdowns and family trauma and attempted suicide. In the cinematic world. this is the purview of women; men aren’t supposed to like this stuff. I sometimes do and sometimes don’t—I hated Terms of Endearment despite being able to recognize that it’s a well-made film. Then again, I’m a huge defender of Ordinary People, a film that involves psychotherapy, family trauma, emotional breakdowns, and attempted suicide. But I knew while we were still establishing characters and relationships that this was going to be something that, with a lesser cast and budget, would be on Lifetime.

Tom Wingo (Nick Nolte) is an ex-English teacher and ex-football coach living in a fairly palatial house in a beach community in South Carolina. He has a strained relationship with his wife Sally (Blythe Danner) but a very good one with his three daughters. His mother (Kate Nelligan), with whom his relationship is terribly strained, shows up one afternoon to tell him that his twin sister Savannah (Melinda Dillon), a poet and author, has attempted suicide again. It’s up to Tom to make the trip from Charleston to New York to see what can be done.

What ensues is a slow-burn relationship between Tom and Savannah’s therapist, Susan Lowenstein (director Barbra Streisand). We learn all about the terrible past of the Wingo family: the abusive and violent father (Brad Sullivan), the flighty, social-climbing mother, older brother Luke who was literally killed by the government for essentially being a domestic terrorist, and all sorts of other pleasant memories of the early years of Tom and Savannah Wingo. We also learn all about Savannah’s breaks with reality, including her adopting another persona to write children’s books (and this is shown to be much more than a simple pseudonym). Inexplicably, Tom also coaches Susan’s son Bernard (Streisand’s real-life son Jason Gould) in football. Also inexplicably, Susan is married to a world-famous concert violinist (Jeroen Krabbe) and Savannah’s best friend is a flamboyantly gay man played by George Carlin.

What we’re supposed to feel is the slow growing emotional connection between Tom and Susan (despite the fact that he almost exclusively calls her “Lowenstein”). We learn that Sally is having an affair and wants to end her marriage with Tom. We learn that Susan’s husband is almost certainly unfaithful and that she is constantly unhappy with her own life. Everyone is unhappy all the time about everything because everyone is completely adrift in their own little world of pain. Think this will eventually segue into a relationship between Tom and Susan? Well, since the poster for the movie shows them in bed together, it’s not a huge stretch, even if it doesn’t pay off until the last half hour or so.

The Prince of Tides seems categorically designed to allow the viewer to experience every single possible human emotion and combination of human emotions during its running time. It’s not so much about the story being told. Instead, it’s simply about the emotions involved at every step. I won’t belittle some of the terrible events that are shown in the Wingo family past—some things don’t merit jokes—but what does happen comes across as almost gratuitous, like it needs to be there because we haven’t yet hit the “horror” spectrum of emotions. It’s not so much that the film is bad or poorly made. It’s serviceable, especially for her second time behind the camera. It’s the story itself that seems hung together exclusively on exploring the spectrum of human emotions rather than on telling a story.

And that, more or less, is what I really object to. The Prince of Tides is not built around a solid plot or increasing complications that lead us to a final conclusion. It’s instead an excuse to play with emotions and little more. So much simply doesn’t hang together. How the hell does Tom Wingo have the house he does as an unemployed ex-teacher? There are perhaps inferences that can be made (wife’s family money? Cash from his mother?) but nothing is explained. Nothing is because the actual reality here isn’t important. All that is important is the emotions. Susan’s husband is made a completely insufferable snobbish asshole strictly to give us someone to dislike.

Nick Nolte is good in this, if not great. He generally was good at this point in his career, and his natural hangdog expression fits nicely with the character of Tom Wingo. Streisand has herself in the role of manic pixie dream psychiatrist, and that feels a bit presumptuous to me. I generally don’t mind her in films, but she really didn’t do it for me here, nor did I buy George Carlin as a gay man. That’s no knock on Carlin, by the way; it’s a knock on a one-dimensional character with which Carlin did the best he could.

I’ll just leave with me not being a fan. I can’t say The Prince of Tides didn’t try, but it also didn’t succeed. The mid-1980s piano-heavy, emotion-dripping soundtrack did it no favors, either. Glad it’s done, glad I won’t have to watch it again.

Why to watch The Prince of Tides: Nick Nolte is good.
Why not to watch: It’s a big ol’ bundle of every emotion possible all at once.