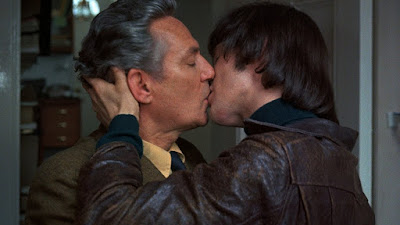 I’ve liked a good amount of John Schlesinger’s work in the past, so I went into Sunday Bloody Sunday interested in what I might be getting. This is also a highly acclaimed film and wound up on four of my Oscar lists. That’s often a good sign.

I think Sunday Bloody Sunday is a good movie. It might well be a great movie. But it’s not one that I ended up liking very much. It’s daring for its time (although far less so now) and beautifully filmed, and I don’t really have anything specific to say against it. But something about it rubs me the wrong way. There’s something about this film that I really don’t like. It might be the characters themselves. It might be that I think I’ve decided I don’t like Glenda Jackson much even if she was the only thing I liked at all in A Touch of Class. Ultimately, I think it’s that there’s a lot going on here that feels really unnecessary. The film feels messy to me, and not in a good way.

Sunday Bloody Sunday is the story of a love triangle. Our participants are Dr. Daniel Hirsh (Peter Finch), Alex Greville (Glenda Jackson), and Bob Elkin (Murray Head, the same guy who sang “One Night in Bangkok”). Normally, given that triangle, it would be Alex who is torn between two lovers, as it were. In this case, our middle partner is Bob. Bob is an artist and is comfortably bisexual. Daniel is, in something of a rarity for 1971, comfortably homosexual. This is not a film that makes an issue of his being gay. It’s never treated here as anything other than what it is—it’s never scandalous or taboo within the context of the film. Alex, a recent divorcee, is also involved with Bob, who spends the film flitting between the two of them, going from the first to the second when trouble arises or he gets bored.

That’s really the whole story here. Both Daniel and Alex fight for Bob’s affections when it’s soon apparent to the audience that Bob isn’t the marrying kind. He’s completely satisfied with both relationships, since he’s getting what he wants from both of them. When Alex agrees to babysit the children of her friends for a weekend and Bob comes with her, he’s happy to leave in the middle of the weekend to spend time with Daniel, leaving her with five insane children, many of whom are openly smoking pot despite being in single-digit ages. Oh, and for some reason these people have a pet monkey. How Bohemian.

This really is the entire film, with weird digressions into Alex’s job trying to find work for other people and Daniel’s time with his family at a Bar Mitzvah. Really, though, it’s about the fact that Bob won’t (or can’t) commit to either Daniel or Alex and the two of them realizing that despite how much they enjoy having this younger man in their lives, that ultimately neither of them can or will have him. Both of them are aware of the other person in the triangle—while Alex and Daniel don’t meet until the last 10 minutes or so of the film, they have the same friends, and all of the friends are apparently used to seeing Bob with both of them.

The strongest thing in the film is that it happily and maturely deals with these relationships in a way that seems much more akin to a film made in the last couple of years than one made during Nixon’s first term. As a gay man himself, Schlesinger naturally had an interest in normalizing homosexuality in some respect, and the passionate kiss between Peter Finch and Murray Head early in the film—while certainly shocking for 1971—goes a long way toward that. It’s the single most impressive thing about the entire film; there’s no judgement going on, at least in terms of each person’s sexuality.

The performances are generally good. I actually like Murray Head quite a bit in this, and Peter Finch was always worth watching. There’s something tragic about him that seems to work nicely for a character like Daniel Hirsh, who has a sort of fatalistic feel to him. But again, there’s something about Glenda Jackson that rubs me the wrong way. I should probably track down more of her films to see (and I’m certain I’ll be seeing more of her). Maybe it was simply the character in this case.

Schlesinger manages to make a lot of the film feel very natural. There’s a little bit of nudity here, but it again feels like it’s something that simply happens. The camera doesn’t focus on it, and it’s simply there without being overtly sexual. But then there’s so much here that feels so specifically stylized (like the pot-smoking toddlers) that pulls the audience out of the reality created by Schelsinger’s good use of camera and shots. It’s frustrating.

Ultimately, this is probably a film I’ll end up respecting a lot more than I’ll claim to like it. I’ve liked enough of Schlesinger’s work that I can probably be safe in having one of his acclaimed films be a partial miss for me.

Why to watch Sunday Bloody Sunday: A love triangle ahead of its time.
Why not to watch: There’s something about this film that’s like biting on tinfoil..