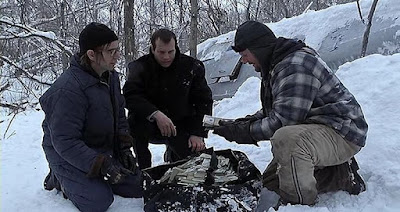 Recently, a few people around the country won a share of the massive Powerball jackpot and have gotten to experience the dream of suddenly finding themselves in the middle of a vast fortune. It’s a common dream. In movie terms, three movies of the last 20 or so years have taken a dark vision of finding a fortune. Danny Boyle’s Shallow Grave looked at the psychological aspects of three people who suddenly can’t trust each other when their roommate drops dead while holding onto millions. A similar basic story in the hands of the Coen brothers yielded No Country for Old Men. It’s the movie that falls chronologically in the middle of those, Sam Raimi’s A Simple Plan that is perhaps the darkest version of that basic story.

Hank Mitchell (Bill Paxton) is a fairly regular guy working in a feed store in a small Minnesota town. In fact, the only thing that really distinguishes him from almost everyone else is the fact that he is college educated. His wife Sarah (Bridget Fonda) works at the library and is pregnant and due any day. One night, Hank is out with his slow brother Jacob (Billy Bob Thornton) and Jacob’s friend Lou (Brent Briscoe). A fox runs in front in Jacob’s truck, and Jacob steers into a tree. His dog chases the fox and the three men go looking for the dog. What they find is not the dog, but a crashed small plane with a dead pilot. Also in the plane is a large duffel bag holding more than $4 million in banded stacks of hundreds.

This is another one of those movies where a discussion of the plot does a massive disservice to anyone who hasn’t seen it. As might be expected, things get suddenly very dark and very twisted almost immediately. What makes the film work as well as it does is that every decision that is made by the characters is completely logical and makes perfect sense. Each step also forces the characters another step further in a descent into a private moral and psychological hell from which there may not be an escape. There are a number of things that A Simple Plan does extremely well, and all of these combine to create a very solid and entertaining thriller.

First, the cast is fantastic. Billy Bob Thornton was nominated in a supporting role as Jacob, and in many ways, he’s the moral heart of the film. Jacob isn’t mentally deficient, but he’s not very bright and has trouble considering possible consequences of his actions. But he’s also the only main character in the film who seems unwilling to continue down an increasingly dark path to keep the money safe and private. Bill Paxton is typically thought of in his more flamboyant and ridiculous roles (Twister and Aliens come to mind), but there’s an everyman quality to his performance here that really sells the entire story. I liked Shallow Grave quite a bit despite not really liking any of the cynical and abrasive main characters. Here, Paxton’s Hank is guilty of some terrible things by the end of the film, and yet he’s completely relatable because of Paxton’s solid performance.

But it’s Bridget Fonda who plays the most interesting character in the film in my opinion. At the start, when Hank is deciding whether or not to tell her about the money, he probes her for what she would do if she found a large sum of illicit cash. She initially says that the only right thing to do would be to return it to someone. He then dumps out the cash on the kitchen table, and she’s immediately on board with keeping the money and doing anything necessary to keep it. While Hank Mitchell is slowly drawn down into his own personal hell, Sarah walks down that staircase with her eyes wide open.

A Simple Plan is also beautifully paced. Sam Raimi has always been interesting with his camera, and here, he tones down a lot of his crazy shots to give us a film where the story is really central instead of the whiz-bang gimmickry of how he shoots it. Raimi has always been a smart director, and he’s rarely been smarter than here. He knows he’s got a story with some bite to it, and rather than jazz it up unnecessarily, he simply lets it all happen.

I also like the fact that A Simple Plan, for a film that has a pretty decent body count, is smart enough not to really give us a lot of action sequences. It would be easy and tempting to have some big shoot-outs and gun battles with this plot, but it never happens. Instead, the moments of violence happen quickly and without warning and are over just as suddenly. It feels far more real because there are no crazy fights—these are real people acting and reacting in terribly real situations.

But it’s the plot that really sells A Simple Plan, and it’s the plot where it really sings. At every moment in the film, we can see exactly why the characters make the choices they do, and we can see ourselves making the same choices. This is a smart movie because it doesn’t make the characters overly clever or overly skilled. These are normal people quickly over their heads and digging themselves in deeper while trying to find a way out.

I liked this a lot. It’s smart, it’s dark, and it works all the way through.

Why to watch A Simple Plan: A different take on a very basic idea.
Why not to watch: No good reason—this is a solid thriller.