Every Breath You Take 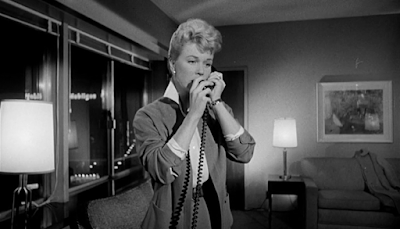 You know that scene in a cheesy thriller where our heroes are in an airplane and the pilot has become incapacitated and someone else has to land the plane? That trope started with Julie from 1956, so it gets the credit or the blame, as you see fit. Evidently, it’s pretty accurate in terms of the technical method of having a non-pilot land a large plane. I realize that in this case I’m giving away the ending of the film, but Julie stars Doris Day, and you didn’t think that a film studio was going to kill off Doris Day, did you?

Julie kind of wants (and by “kind of” I mean “desperately”) to be a film noir with a female protagonist. It succeeds in this for the first two acts and then jumps right out the window with our airborne drama. Ah, but I’m ahead of myself. It’s important to know, though, that Julie is very much a film of two halves.

Our titular hero Julie (Doris Day) has just married Lyle Benton (Louis Jourdan), a concert pianist and friend. We learn immediately a few important things. First, Lyle is insanely jealous of any man showing any amount of attention to Julie and of Julie paying attention to anyone but him. When they fight about it in the car while she is driving, Lyle presses his foot down on hers, sending the car careening down the highway with Julie desperately attempting to steer them away from an accident. When they finally stop, Lyle reveals the depths of his jealousy—he’d happily kill her to prevent another man from having her. We’re off to a good start.

It’s then revealed that Julie is a widow and that her previous husband committed suicide. Ah, but did he? The night that he died, Lyle was there, and Lyle admits that he was interested in Julie before her first husband’s death. Since we’ve already established that he’s crazy, we’re now starting to wonder just how crazy he might be. Julie confers with friend Cliff Henderson (Barry Sullivan) and then tries to coax a confession out of her new, scary husband. It’s surprisingly easy to do—he freely admits to killing her husband so that he could marry her himself.

With this out of the way, Julie flees with the assistance of Cliff, but Lyle seems to know her every step. The police can’t help because there’s no proof of anything. With Cliff’s help, Julie changes her name and returns to her old job as a flight attendant (yes, it’s “stewardess” in the film, but times change). Even this doesn’t through Lyle off the track. He ambushes Cliff, shoots him, and discovers Julie’s new name and whereabouts. He also discovers what flight she is on and manages to sneak onboard without her noticing. This is what leads to our intrepid heroine flying the plane at the end of the film.

Naturally, there are some significant problems with Julie, beginning with the title song, which was somehow Oscar-nominated (along with the screenplay). I watched this film a couple of hours ago and I can’t tell you how the song went or any of the lyrics (aside from the repeated “Juuuuuuuuuuuu-lieeeeeeeeeeeee”). All I can tell you is that Doris Day sang it, and bully for her. Drop a jazz soundtrack in here and we might at least be starting somewhere interesting.

For the first two acts, the biggest issue is that Lyle seems to immediately know everything about Julie’s actions and whereabouts no matter what she does or what is done on her behalf. We don’t really get a solid idea of how he seems to know everything—how he knows (for instance) what false name she uses to check into a San Francisco hotel, or specifically where to locate Cliff while Cliff is out on the road. I give the film props for making Lyle’s stalking really creepy. Much of it involves him playing tape recordings of him playing the piano, and these moments are really disturbing and effective.

And then there’s the third act, which is honestly pretty ridiculous. There was a great deal of potential drama in the situation we’re given—Lyle and the object of his obsession together a few thousand miles up with no way out. But the whole idea of forcing Julie to land the plane seems like ridiculous pandering.

As a final note, I don’t really have any issues with any of the performances here, but I do need to say something about Louis Jourdan. The guy is French and speaks with a French accent. As such, the name “Lyle Benton” really doesn’t work. This is an original screenplay. How hard would it have been to simply rename the character Lucien Benoit? At least then he’d match how he sounds.

Julie is right around the point of being campy fun. I’m not sure it gets all the way there. I kind of enjoyed it, at least until it just disappointed me.

Why to watch Julie: With some willing suspension of disbelief, the first two acts are pretty good.
Why not to watch: The third act is ridiculous.