Who Would You Vote for?

Film: Bulworth
Format: Streaming video from NetFlix on The Nook. 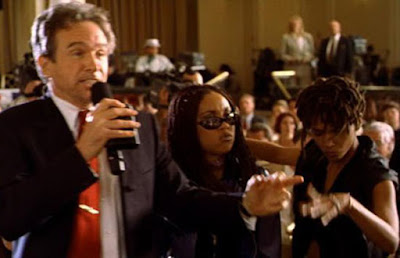 It’s 2016, which means that we’ve got a presidential election coming up this year. That being the case, a film like Bulworth seems completely appropriate. Bulworth is political farce that treads on ground similar to Wag the Dog from the year before and Dave from a few years before that. At least that’s true in the sense that it’s political satire. That’s where the similarities stop, though. It’s a fascinating premise for a comedy, and it generally works pretty well.

The film is set in 1996 during a presidential campaign, but that’s not where the film is focused. Instead, we’re focused on the senatorial campaign of Jay Bulworth (director Warren Beatty), a democrat who has moved into neo-con territory of family values and anti-Affirmative Action positions. Despite his platform, his marriage to Constance Bulworth (Christine Baranski) is a sham, with the two of them having affairs with complete knowledge of the other.

Bulworth has completely lost his way, and possibly his mind. Not capable of mentally enduring another term in the Senate and unwilling to do anything else, Bulworth comes up with a plan. He’ll kill a bill regulating the insurance industry if the insurance companies will give him a $10 million life insurance policy. And then he hires a hitman to kill him so that his daughter will inherit the money and be taken care of. That way, he no longer has to deal with the life he’s been living, has no worries for his daughter’s future, and gets out without a scandal.

This sudden realization that he’s about to die gives him complete freedom to do what he wants, and he decides that what he wants to do is speak his mind honestly and openly. At his fundraisers, he tells people not what they want to hear, but the truth about why things don’t get done in Washington (he deals with issues that specifically affect his donors, after all). He even starts offering speeches in an embarrassing old white guy rap. What does he have to lose?

Of course, the joke here is that the new, completely honest Jay Bulworth becomes an immediate media sensation, and suddenly he’s wildly popular. And with this new honesty and a new love interest named Nina (Halle Berry), Jay Bulworth doesn’t want to die. But there doesn’t seem to be a way to cancel the hit he’s put out on himself.

There’s a lot that works with Bulworth. To begin with, the idea is excellent. There have been plenty of political films in the past. Some of these have been deadly serious while others have been far more satirical, but Bulworth takes the idea in a very different direction. Like all good satire, it exposes a real problem in society (the corruption of the political process) and does so by taking it to an extreme and seeing where that extreme takes it.

It’s also got a fabulous cast. In addition to the people mentioned above, Bulworth has performances from Oliver Platt, Don Cheadle, Joshua Malina, Jack Warden, and Paul Sorvino, as well as cameos from George Hamilton and Larry King. There’s also an appearance by playwright and poet Amiri Baraka. All are good in the film.

There are a few places, though, where I think the film takes it too far. The romance between Jay Bulworth and Nina is implausible off the top, although I can buy it in the sense that power is, after all, an aphrodisiac. But the entire film turns on a few improbable and silly coincidences that really damage the credibility of the film. It’s a good idea and doesn’t need to go to the extreme sort of one-in-a-billion coincidences that make most of the third act implausible at best.

I do like the ending, though. Bulworth has the sense to end on a note that fits the genre of a black comedy/satire. Better, it doesn’t cheat the ending, even if it does cheat some of the premises to get us there.

Bulworth has an excellent screenplay, even if it lacks the sardonic nature of Wag the Dog and the heart and warmth of Dave. It’s clever and stays true to itself, and that goes a long way.

Why to watch Bulworth: A premise that could only happen in a movie.
Why not to watch: I normally say the opposite, but I think this one might go too far.