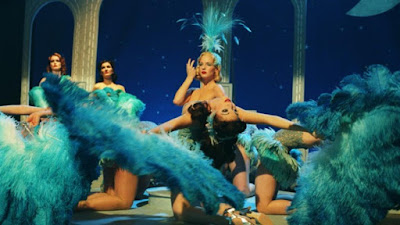 My local library is closed, which means that I’m forced one town over. It was a nice surprise to discover that the library I’d been hitting through interlibrary loan has a substantial movie collection. I’m evidently in a whimsical mood these last few days, with Designing Woman yesterday and Mrs. Henderson Presents today. Since comedies tend to be in short supply on my Oscar lists, staying in this mood for too long might mean a lack of comedies for the next couple of years.

Mrs. Henderson Presents purports itself to be based at least partially on the truth, or inspired by real events. I don’t know enough about the history of the stage in London to know if this is true or not, but I suspect it is. As we open, Laura Henderson (Judi Dench) has just been widowed. Her friend Lady Conway (Thelma Barlow) tells her that widowhood isn’t all bad. It means that she can have affairs and buy things for herself that her husband would have balked at. Laura takes this to heart and purchases an old theater.

Once the theater is hers, she looks to hire a manager. The man who gets the job is Vivian Van Damm (Bob Hoskins). The two immediately clash with each other. Vivian demands that she give him complete freedom in whatever shows they put on. For Laura, this is all a lark, the first real thing she may have ever done. She names the theater The Windmill after the street it is on. The theater opens in 1937 with a show called Revudeville, a musical with Vaudeville-style acts. Their innovation is that it is a continuous show. After some initial success, the show begins losing money because all of their competitors start doing the same thing. And so, our titular Mrs. Henderson decides on a new innovation: nudity.

Her thinking is that their revue would be thus quite a bit more like those in Paris, particularly those at the theater’s sort-of namesake, the Moulin Rouge. Of course, this sort of thing simply wasn’t done in London in 1937, which means the theater needs the permission of the Lord Chamberlain, Lord Cromer (Christopher Guest), who happens to be a family friend of the Hendersons. He’s against the idea, naturally, until she reminds him that nudity is frequently viewable at any museum in many classic works of art. He agrees, and tells her that nudity will be allowed provided only that the girls don’t move. That way, they can at least pretend that it’s something like art.

Eventually, Vivian and Bertie (Will Young), the gay musical lead, decide that the girls already in the show aren’t right for what they want. What they want are fresh faces, non-theater performers, and so they scour the country for girls willing to disrobe on stage. While the girls aren’t keen to it at first, the fact that there is a depression and everyone is desperate for work goads them, and suddenly The Windmill is a success again.

There are some wonderfully comic moments in the film, including the girls forcing the men who work at the theater (including Vivian) to strip down as well if they have to be nude for rehearsals. There’s also one of the best spit takes in recent memory.

But there’s also some strange darkness in the film that doesn’t really fit with the rest of the film’s themes. Eventually, of course, the war comes and The Windmill is still in operation. The theater is underground, which means that it’s relatively protected from bombings, but the Blitz is still going on, and the theater is suddenly populated not with horny men but with soldiers preparing to go off to war. Mrs. Henderson attempts to create romance between a young soldier and Maureen (Kelly Reilly) that ends badly. We also discover why she visits a particular grave a few times during the course of the film.

The issue here is not that there is darkness in what is otherwise an entertaining comedy, but that the darkness really only happens in the last 20 minutes or so. I understand that this is a reflection of the reality of the situation. There is a war going on and terrible things happen during a war. But it just seems tonally off, like it belongs to a different story or a different film.

A much larger problems is the girls themselves. Mrs. Henderson Presents makes a big deal of finding these fresh new faces to put on the stage and to have bare their various assets, but then does nothing with them but that. Aside from Maureen, none of these girls really have much of a personality or much to do except stand around nude on stage. They have names, but I’ll damned if aside from Natalia Tena I could pick one out from another.

Judi Dench, though, is great. Mrs. Henderson is a wonderful combination of eccentricity, worldliness, and naivety. She’s more than happy to do and say shocking things, but has absolutely no idea of how people without money actually survive or how other people really live. Everything to her seems to be a game, even if that masks some darker truths.

Bob Hoskins is also a lot of fun in this. I’m not used to hearing him talk with a more refined accent, but he pulls it off well. And, if you’ve ever wanted to see Bob Hoskins do full frontal, this is the film for you.

Why to watch Mrs. Henderson Presents: Judi Dench perfectly in her element.
Why not to watch: The dark turn near the end seems out of place.