A Dickens of a Tale 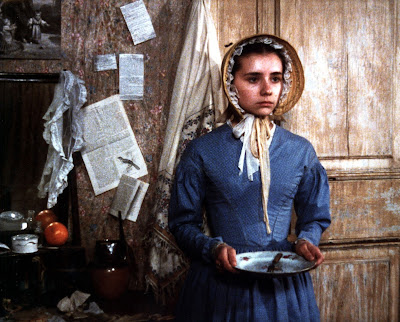 When I did the 1001 Movies list, one of the (many) things I tracked was film length. I didn’t want to end up with a bunch of three-hour movies in the last couple of months. I made it a goal to watch two of the top-10 in length movies every month, and it really helped. That’s something I’ve gotten away from in the last year or so, and because of this, the lengths of the movies I still have to watch on my current list has slowly crept up and up. Well, no more. Today I’m reversing that trend by knocking out Little Dorrit from 1988. It’s not only the longest movie I had left to watch, it was the longest by almost two hours, clocking in at just under six hours total.

This version of Little Dorrit (and this might be common—this is the only one I’ve seen and I’ve never read the book although this seems to be consistent with the novel) is broken down into two three-hour segments. In the first segment, we see the story from the perspective of Arthur Clennam (Derek Jacobi). Arthur was shipped off to China to work for his father at a young age. When the story starts, Arthur has returned home to England after the death of his father. He’s realized that his entire life has been lived at the behest of other people and that he’s never really done anything that he’s wanted. His mother (Joan Greenwood in her final role) is a fundamentally religious harridan who hasn’t left her room in a dozen years. All he wants is to get out from under her thumb.

The second part of the film comes from the perspective of Amy Dorrit (Sarah Pickering), the “Little Dorrit” of the title. Amy begins life born in the Marshalsea debtors’ prison. Her father William (Alec Guinness) has lived in Marshalsea for years, and his children Fanny (Amelda Brown), “Tip” (Daniel Chatto), and Amy live there with him, but are free to come and go. Since this is based on a Dickens novel, it’s no surprise that Little Dorrit works for Arthur’s mother, which is how the two meet. While Arthur’s story is about the loss of his fortune and his ending up in Marshalsea himself, Amy Dorrit’s story is about how Arthur delivers her family from the prison and her rise in fortune.

A great deal of the story seems to be about making just about everyone in the story aside from Arthur and Amy horrible people you wouldn’t want to spend any time around. The only positive quality to Arthur’s mother, for instance, isn’t in the script—it’s Joan Greenwood’s voice. Greenwood is obviously decades older than she was in her heyday roles in films like Kind Hearts and Coronets, but her voice, which I’ve described elsewhere as sounding like a cat purring through a mouthful of butter, is absolutely the same.

But she’s not the only hateful character. Fanny Dorrit is a social climber and a scold. Tip Dorrit is indolent and kind of an asshole, and even William Dorrit is a pretentious snob. At first, it’s kind of reminiscent of someone who is a little daffy—he’s putting on some airs despite being in prison. Later, when he comes to his fortune, he’s just kind of insufferable. Arthur’s former fiancée Flora Finching (Miriam Margolyes) talks and giggles incessantly about nothing. She’s a terrifying creature. Even Mr. Pancks (the great Roshan Seth) who is instrumental in getting the Dorrits out of Marshalsea, is instrumental in putting Arthur into the prison.

Sadly, there’s not a great deal to recommend here. The costuming is excellent, and I’m a little surprised that it wasn’t nominated. The same is true for the production design, which is truly impressive. Alec Guinness, who was nominated in a supporting role, is excellent, but when has he ever been anything else?

The biggest problem for me is that I have a hard time buying the relationships and caring much about the characters. Arthur is a complete marshmallow, unable to do much of anything without someone doing it for him. It may well be an accurate adaptation of the novel, but with so little going for it, it’s difficult to recommend. At the very least, the characters in this version of the story have no chemistry. Derek Jacobi and Sarah Pickering couldn’t possibly look less interested in each other. Jacobi’s had a solid career. Sarah Pickering literally never made another film and had never done one before this. I’m putting the blame solidly on her. She’s certainly easy to pity, or at least her situation is, but I have absolutely nothing good to say about this version of Amy Dorrit.

In fact, the only thing here that makes me happy is that I feel as if a great weight has been lifted from me. I no longer have to worry about this six-hour weight hanging over me. No surprises that this is not a film I’ll be revisiting anytime soon. Or ever.

Why to watch Little Dorrit: If you’ve got a spare day…
Why not to watch: There’s very little to recommend it.

Posted by SJHoneywell at 9:19 PM