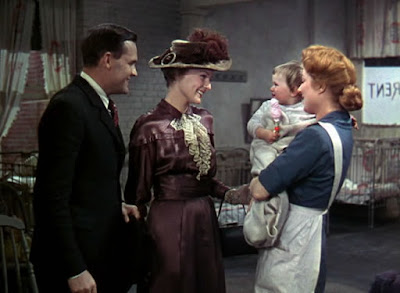 I suppose I must be a Greer Garson fan. Garson was nominated for seven Best Actress awards (winning one for Mrs. Miniver) and after tonight I’ve seen all seven. Garson is hard not to like. She’s a classic screen beauty for one thing. For another, she had genuine skill in front of the camera. I’m almost a little sad that I watched Blossoms in the Dust tonight, because it’s the end of my watching her nominated performances. Oh, she’s not going to replace Barbara Stanwyck or Myrna Loy in my classic actress pantheon, but I’m certainly going to reserve her a place.

That said, another reason I might be saddened by watching Blossoms in the Dust is that it might be my least favorite of her nominated films. Oh, it’s not a bad film by any stretch of the imagination, but it’s a very obvious one in where it goes. The melodrama is piled on thick and heavy here, and no mistake about it. There isn’t a moment here that doesn’t call out for strings. Despite this, perhaps because of it, it’s also a film that doesn’t ever stay too long on a single emotional beat. Tragedy is regularly followed up with an immediate shift in emotional focus. Yes, one needs a good emotional transmission for this to avoid stripping the gears.

Anyway, Edna Kahly (Greer Garson) is a young debutante planning her marriage along with Charlotte (Marsha Hunt), her adopted sister. The two are happy, wealthy, and have pretty much everything they want in life. In fact, the biggest concern of Edna is that a bank teller made a pass at her, claiming that she should dump her fiancé and marry him instead. Turns out that eventually that’s going to happen. The bank teller is Sam Gladney (Walter Pidgeon), who essentially sweeps Edna off her feet and wins her through a long-distance chain of correspondence. When Sam eventually returns to her, they plan on marrying immediately. In fact, they want a double wedding: Edna and Sam along with Charlotte and her beau. But Charlotte’s in-laws-to-be discover that she was an illegitimate child and before anyone can say anything, Charlotte wanders upstairs in the house and shoots herself.

And suddenly Sam and Edna are married (and yes, that’s pretty much the transition). Edna eventually has a child, but is told she can’t have any more. Of course, tragedy strikes and their child dies in an accident. Time passes (we’re shown via bouquets of anniversary flowers and jewelry) and Edna has become stone-cold when it comes to children. The pain is simply too much. But it’s Sam who makes her see that the children of other women aren’t there to torment her. Now with a mission in life, Edna essentially opens up a daycare in her home for the children of Sam’s mill workers. And of course tragedy strikes. Sam loses his mill to foreclosure and suddenly the Gladneys are poor.

And again, Edna finds her calling. Working on sending something in the mail for Sam, she encounters children being adopted in a courtroom. She witnesses a young boy named Tony (no last name) being refused by potential parents because he is illegitimate. And suddenly Edna is taking care of foundling children, working to give them a good home. We get a few instances of mean and judgmental people working to bring her down, but she perseveres and eventually opens up an orphanage, working to put orphaned and illegitimate children into good homes. Eventually, she realizes that Charlotte’s life should not be in vain, and she works to get the Texas legislature to pass a bill that removes the word “illegitimate” from all birth records of children, allowing them to not have the social shame of a sinister birth.

There’s more, of course. I’ve left out a few key moments of tragedy because, well, spoilers aren’t fun, even for a movie that’s 75 years old. Suffice to say that we’ll be getting emotional swings pretty constantly through the running time, with terrible tragedy immediately followed by upbeat music and happy times. The film doesn’t even give you a chance to wring your hanky before it wants you to completely change your emotional state.

There are some good points here. Garson, as always, is immediately sympathetic, and in Technicolor, she looks as good as she ever has. Garson had a particular warmth on camera that comes through well in this role. She is, after all, fighting the good fight here, and so not only is she easy to root for, her cause is a just one. It doesn’t hurt that Blossoms in the Dust is based on the life of the real Edna Gladney, and while Hollywood always takes license (and especially did so in the earlier days of film), a lot of the details here appear to be correct.

But there’s also a big ol’ thumbprint of manufactured drama here, even if all of the drama isn’t completely manufactured. There’s a court case brought against Edna near the end of the film, and the man bringing the case is an obvious sleaze. He’s supposed to be, of course. We’re supposed to hate him in all three of the scenes he’s in because, true to the melodramatic form, he’s given not a single positive quality. Edna Gladney, as well as her doctor friend Max Breslar (Felix Bressart) are, of course, the opposite of this and have nothing but good qualities. The same is true of Sam Gladney, who takes his bankruptcy with a smile and a laugh. It’s a little hard to take.

Blossoms in the Dust is good for what it is and for a straight melodrama, it’s got all of the elements fans of the genre will want. It’s just not really for me. It comes across as too earnest and trying too hard to hammer its message home. The truth is that it didn’t really need that much hammering—the point being made by the film is a good one, and it didn’t need a great deal of help to make its case. It’s a hard film to dislike completely, but, aside from Greer Garson (who never ages in the film), it’s also a difficult one to like more than just a little.

Why to watch Blossoms in the Dust: Greer Garson, naturally.
Why not to watch: It tries far too hard.