Picks from Chip: The One I Love

Film: The One I Love
Format: Streaming video from NetFlix on The Nook.

This is the first in a series of twelve movies selected by Chip Lary at Tips from Chip. 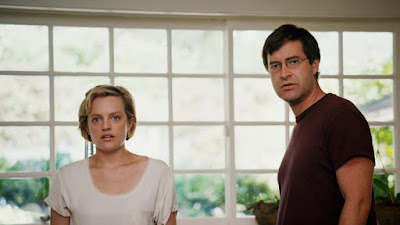 No matter. Ethan (Mark Duplass) and his wife Sophie (Elisabeth Moss) are having trouble in their marriage. It’s clear through conversation (though not admitted until later) that a big part of that is trust issues caused by infidelity. Their therapist (Ted Danson) recommends that the two of them head off to a retreat for a weekend. They arrive and find themselves completely isolated—there appears to be no one else there. Oddly, the property not only has the house they are staying in but also a guest house.

That night, Sophie heads into the guest house and has a fun evening with Ethan. She returns to the main house only to find Ethan sleeping on the couch. She thinks it’s a joke, but Ethan really has no memory of their time in the guest house. She gets mad and Ethan retreats to the guest house, only to encounter a perfectly happy Sophie, who cooks him breakfast the next morning, a breakfast that includes bacon—something she hates. It’s not too long until Ethan and Sophie figure out that the guest house is something like an alternate dimension. When Sophie goes in, there’s another Ethan. When Ethan goes in, there’s a different Sophie. Their duplicates are, in almost all ways, better versions of themselves. They’re funnier, wittier, smarter, more emotionally connected. And while Sophie finds this all very interesting, Ethan finds it all very disturbing.

There is, of course, a lot that happens here, but The One I Love is not a film to have spoiled. This leaves me with a bit of a quandary, since I typically spend a good portion of reviews covering aspects of the plot, since the narrative is often what I find to be the most interesting part of the film. Ultimately, what that means here is that this will probably be a much shorter review than I am used to providing.

The One I Love is partially successful in what it wants to do. It has a unique premise and it presents itself very well. The biggest issue I have with it is that once that premise is established, there are only a couple of ways that the film can end, and the premise is established quickly. I didn’t put spoiler tags around the short summary above because it’s not at all a spoiler—everything I said up there is known to the audience by the end of the first act. We go to some really interesting places here, but as the film continues, the possible ways that it can end really come down to just two, and an astute viewer will not have much trouble figuring out which of those two endings is the one we’re going to get.

I’ll give it this—it’s subtle. The One I Love makes a key of establishing one key element about Ethan and his doppelganger, and does it in a way that we don’t notice something else that is critically important. In fact, without paying attention, it wouldn’t be a huge shock to me that the ending works on a lot of people. For the record, though, I guessed that it would go where it went. In fact, I guessed what the ending line would be. I was wrong; it was actually the next to last line. It’s the kind of resolution that it would take someone really invested in guessing the ending to get.

This isn’t to suggest that I’m particularly astute, because while the ending does have a good chance of working with a lot of people, the film also works against the ending being a shock. Once we know what is going on with the guest house, we’re on the lookout for something to happen in the closing moments.

Ultimately, I’d say I liked this, but I don’t love the resolution. I think the first two-third are better than the close, and unfortunately it’s the close that stays with me for almost every movie I see.

Why to watch The One I Love: A fantastic idea pulled off well.
Why not to watch: Once the premise is established, there are only a couple of ways it can end.

Email ThisBlogThis!Share to TwitterShare to FacebookShare to Pinterest
Labels: Charlie McDowell, comedy, fantasy, romance, The One I Love, Tips from Chip