Film: The Story of Louis Pasteur
Format: Video from the Magic Flashdrive on laptop. 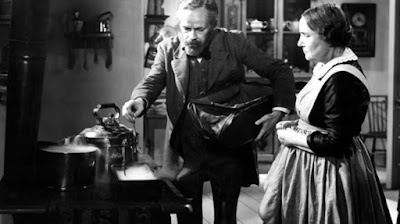 I like films that stress science. Not movie science, but real science, the kind that actually figures things out and might potentially improve life for people. The Story of Louis Pasteur certainly seemed to be a film right in line with films like Dr. Erlich’s Magic Bullet, Sister Kenny or Madame Curie, films that glorified good science in a way that translated well to the average filmgoer. I appreciate stuff like that. We need more of it because at least Americans are really, really stupid when it comes to science as a general rule.

There’s no mystery what this is about in general. Specifically, this is about Pasteur’s work not in creating pasteurization, but in developing vaccines for anthrax and rabies. Like many a film that deals with scientific discovery we will have a brilliant and determined hero scientist who makes a world-changing discovery that is immediately dismissed by those in power in the scientific halls of knowledge. In this case, our plucky hero is the titular character, Louis Pasteur (Paul Muni). The main opposition comes from Dr. Charbonnet (Fritz Leiber), a doctor who is appalled by the idea that diseases can be caused by microbes and aghast at the implication that he should wash his hands or sterilize his instruments between patients.

Knowing that, and that’s the initial conflict here, it’s obvious to anyone where this is going to go. Naturally Pasteur is going to be proven right in the end and will become a scientific hero. So rather than hide what would be immediately obvious to the entire audience, what we get is the story of how Pasteur gets there. He is first laughed out of Paris by suggesting that microbes can cause disease. Later, when France is suffering an epidemic of anthrax in the sheep population, it is discovered that one province of the country has virtually no anthrax. It just so happens that it’s the province where Pasteur has gone, and he’s providing a free vaccine to all of the sheep herders in the area. A test is developed. A herd of sheep is inoculated with Pasteur’s vaccine and another herd is not. A few days later, Pasteur’s sheep are all still alive and the other herd has been wiped out. Victory for science!

Well, kind of. Most of the intelligentsia still don’t accept Pasteur’s theories, so the disease de jour shifts to rabies. Pasteur and his team are convinced that this is caused by a microbe as well, while Dr. Charbonnet continues to dismiss the idea. When a young boy is bitten by a rabid dog, it’s Pasteur to the rescue, and eventually, even Charbonnet is convinced. Really, this isn’t a spoiler. If you couldn’t figure out that this was going to happen, it’s because you are completely unaware of the germ theory of disease, have never seen a movie, and don’t know what a doctor is.

Because this is a film made in the mid-1930s, there has to be a love story as well, but Pasteur is too old to have a romance. Anyway, when the film starts he’s already married to Marie (Josephine Hutchinson). No, the romance will be between Pasteur’s daughter Annette (Anita Louise) and Dr. Jean Martel (Donald Woods), a young doctor who early on decides that Louis knows what he is doing and signs on to work with him. For a wonder, the romance is really almost completely absent from the film. To the film’s credit, it focuses almost entirely on the science and on the various experiments of Louis Pasteur and his team. It feels like the romance is an afterthought, and in that respect, it actually works.

Paul Muni won an Oscar for this role. Muni was officially nominated five times (he came in second on a write-in ballot in 1935), and it feels very much like this was a make-up Oscar from the year before. Evidently, there was a huge amount of support for Muni’s performance in Black Fury, so the Academy decided that Muni should win the following year. I like Paul Muni. The man absolutely deserved an Oscar in his career, one that has been sadly forgotten by a lot of people. He just didn’t deserve one for this role, good as it is.

As much as I may appreciate the work of Paul Muni and as much as I appreciate films that trumpet the real value of science, this is a film that doesn’t do much for me. That’s a shame because I really wanted to like it.

Why to watch The Story of Louis Pasteur: Because SCIENCE!
Why not to watch: There’s not a great deal of drama going on here, really.