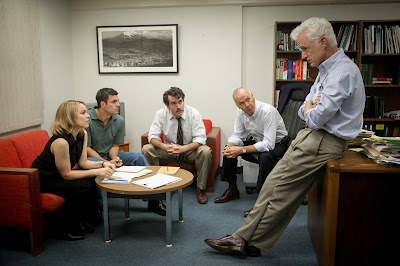 I met my wife working on a college newspaper. I worked as an occasional reporter and regular music critic; she was one of the editors. Neither of us are really in journalism anymore—this blog is about as close as I come to anything like journalism and this really isn’t anything like journalism. There was a golden age of journalism and we’re not in it anymore. Great journalists are important, though. They can change the world by revealing painful and ugly but important truths. Spotlight is a reminder of this.

Spotlight has only one major problem to overcome. Like many stories about important historical events, the ending here is not in question. Anyone who pays even a little bit of attention to the world knows how this comes out. It takes good writing, careful direction, and compelling performances to keep the audience interested. It’s a good thing, then, that Spotlight qualifies on all fronts.

This is the story of how the issue of pedophilia amongst priests in the Catholic Church was broken by a team of reporters from the Boston Globe. It starts with the introduction of Marty Baron (Liev Schrieber) as the new editor of the paper. There’s an immediate tension here, since Boston (as we’re told many times in the film) is really a small town and Baron is an outsider from Florida. He’s also Jewish in a town that is predominantly Catholic. Working for Baron is the Spotlight team, a small team of reporters headed by Walter “Robby” Robinson (Michael Keaton who I think now qualifies as having a renaissance). Also on the team are Michael Rezendes (Mark Ruffalo, nominated in a supporting role), Sacha Pfeiffer (Rachel McAdams, also with a supporting nomination), and Matt Carroll (Brian d’Arcy James). Overseeing the team at least in theory is Ben Bradlee Jr. (John Slattery), son of Ben Bradlee, who was the editor of the Washington Post during the Watergate scandal.

The story begins with a case concerning a priest accused of molesting children. Slowly, other connections to the story come to light. There is a Boston-area victims group and allegations about other priests who were shuffled from parish to parish when new allegations came to light. Lawyers for the church make vague claims about cases that were decided out of court. One, Eric MacLeish (Billy Cruddup) says he won’t talk to the reporters, but also claims that he sent them important documents years earlier implicating 20 area priests. Another lawyer, Mitchell Garabedian (Stanley Tucci), appears erratic, but also seems to be the only person willing to truly represent victims and take the cases to trial.

As the team digs deeper, more details and more terrible details come to light, showing that the problem is not isolated to a couple of priests. Marty Baron tells the team that he won’t run the story until they can implicate the entire system and more specifically can shed light on the behavior of Cardinal Bernard Law (Len Cariou), the Bishop of the archdiocese. While some of the focus remains on the victims, the intent of the investigation shifts to determining if Law new about the abuse and did nothing to prevent it or bring it to light.

With this as the main focus of the film, it’s almost impossible for the story not to be a compelling one. Spotlight really has no issues in that regard. It becomes the job of the director and the cast to present the story in a way that keeps it compelling and moving forward. That’s not particularly easy. As mentioned above, the outcome of the case is never really in question for anyone who pays even scant attention to the news. When hurdles come up, like public court documents being removed from cases, it’s almost a guarantee that this is going to be overcome in one way or another.

Of the four main players on the Spotlight team, Matt Carroll seems to get the shortest shrift, although there’s a minor subplot involving his discovery of a treatment center for pedophile priests in his neighborhood. Much more of the focus falls on Mike Rezendes and Sacha Pfeiffer. It’s Rezendes who does a great deal of the investigative work on the Church while Pfeiffer concentrates in large part on the victims. Both Mark Ruffalo and Rachel McAdams are great here. Their portrayals focus on the professional with glimpses into the personal.

In many ways, though, this film belongs to Michael Keaton and Liev Schreiber. Keaton is passionate and driven, personally motivated to get to the bottom of the story but also to do it the right way. Schreiber’s portrayal of Marty Baron is oddly low key but none the less compelling for it. It’s deceptively dispassionate; underneath his exterior there lurks not merely a man who cares deeply about the story and the paper, but about doing the right thing and getting it done well.

A great deal of the success of Spotlight falls squarely on the shoulders of writer/director Tom McCarthy. There’s always a danger of boring the audience with a known outcome and that never happens here. McCarthy’s story focuses on the process and the cover up. While we might know where this is going, the real tale is in the convoluted path the story takes. His direction keeps the film moving. There are no action sequences, and only a couple instances of raised voices, but the passion is here throughout. There are people on all sides who care deeply about what happens, who know that something is terrible and wrong, and who don’t know what they should do about it.

Spotlight is a hell of a movie. It would be an important film just for the story if nothing else. That it’s well made and interesting only makes it that much better. I almost want to watch it again right now.

Why to watch Spotlight: A reminder that journalism should be important and is when it’s done well.
Why not to watch: I imagine if you are Catholic that this might create a crisis of faith.