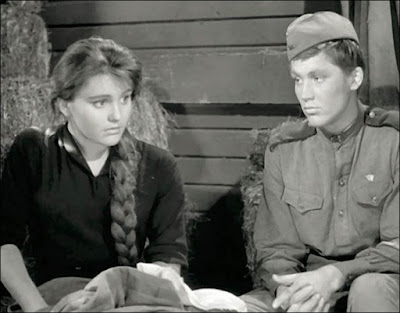 I don’t always do a good job of monitoring my NetFlix account. I had Ballad of a Soldier (or Ballada o Soldate in Americanized Russian) already DVRed, and I’m having a stressful week at work, so a subtitled film, no matter how short that I already had access to probably wasn’t the best choice to have show up. I’m a slave to the queue, though, and figured that stress or no, I should probably watch it.

This is one of those movies that shows up in nomination lists years after its actual release. Ballad of a Soldier was produced and released in Russia in 1959, but didn’t manage to swing a nomination for Best Original Screenplay until 1961. Honestly, it probably worked in this film’s favor—the 1959 list of nominates included The 400 Blows, so it might have filled the quota for non-English films.

This is very much a war film, and while there’s a sense of it being a propaganda film, it’s a very unusual one. We start by knowing the ending. We see a Russian woman looking down a road in vain for her son, knowing that he won’t be returning from the war. Within the first few minutes, we know that our main character Alyosha (Vladimir Ivashov) will not be returning home after World War II. What follows is a week of Alyosha’s time. Except for his first few minutes on screen, we’re not actually going to be dealing with war at the front, but with the war miles behind the front.

We see Alyosha out on the front where he knocks out two enemy tanks on his own. That he did this more out of panic and a desire to survive than from heroism or patriotism is neither here nor there. He is put up for a decoration, but asks instead for leave. His mother has written him and has told him that the roof of their house has started to leak. Alyosha wants a day to go home and repair the roof before returning to the front. His achievement is important enough that he’s given a full six days of leave—two to get home, two to fix the roof, and two to get back.

This is easier said than done, though. His trip back home is arduous, and along the way he is forced to deal with a variety of problems, most coming from the destruction of the country because of the war. Roads are damaged, trains are difficult to come by, and even food is difficult to locate. When Alyosha helps free a vehicle trapped in the mud, another soldier named Pavlov (Gennadi Yukhtin) discovers that Alyosha is going close to his home. He gives him two bars of soap to take home for his wife, since Alyosha will be travelling close by.

Eventually, Alyosha manages to bribe his way onto a train. Shortly thereafter, he encounters Shura (Zhanna Prokhorenko), a young girl travelling on her own who has also stowed away on the train. Shura, assuming the worst, is terrified of Alyosha at first, but after some time travelling together, the two become close. At one point, Alyosha gets off the train to find water and doesn’t get back in time to catch it. He hitches a ride to the next station only to discover that Shura has gotten off to wait for him. It’s clear that despite her claim that she is going to visit her fiancé, Shura is starting to have real feelings for our boy Alyosha.

It’s not a spoiler to say that we know that Alyosha doesn’t survive the war, since we know that within the first couple of minutes of the film. A bigger question within the context of the film is what happens when Alyosha and Shura need to part ways, and whether or not Alyosha will get home before his leave runs out as he battles destroyed train tracks and a variety of other problems on the road. I won’t spoil these things here.

Both Vladimir Ivashov and Zhanna Prokhorenko were newcomers to film with Ballad of a Soldier and it kind of shows. They are a bit wooden on screen in a number of places, but it also kind of doesn’t matter. A real part of this film, at least in terms of the propaganda, is not about Alyosha’s sacrifice, but the image that both he and Shura are trying to fit. They are, in many ways, the cream of the Soviet proletariat. They’re both pretty and upbeat no matter the problems or issues they face. They are gung ho for the country, always looking for the best in every situation despite their hardships. These are who the young Soviets are supposed to be and to emulate. In essence, this is the propaganda here, not the “hooray for the Soviet military.” Sure, Alyosha’s general is perhaps a little too nice to immediately agree to a week’s leave, but it’s pretty harmless.

It’s a strange film, and a rather beautiful one in a very sad way. We know that everything Alyosha does is ultimately doomed. We know that he’ll never come back to Shura or probably ever see her again. It’s tragic because of it, and it makes their few moments of happiness that much sadder. What I really want to know is how much different it would be if we didn’t know the end at the beginning. Would it make the end harder to take? It might, but we’ll also never know.

Why to watch Ballad of a Soldier: A war story tinged with sad romance and futility.
Why not to watch: Would it be better if we didn’t know the ending at the start?