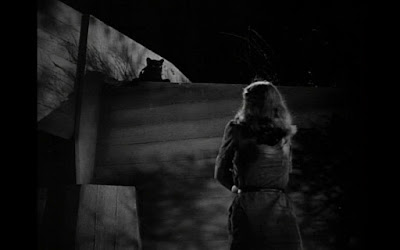 I’ve not been shy on this blog about my love of Jacques Tourneur and especially the work he did with the great Val Lewton. As pure horror movies, they don’t work based on what the world thinks of as horror movies now, but that’s okay. Their work was low budget by definition, and so the scares and thrills had to be done with movie cleverness, with shadows and sounds rather than leaping monsters and gore. It’s great stuff when it works, and every one of their movies (at least the ones that I’ve seen) have at least a few places where that creepy vibe comes out and works like a charm. The Leopard Man is no exception.

It all starts innocently enough. Singer Kiki Walker (Jean Brooks) is stuck in New Mexico with her manager Jerry Manning (Dennis O’Keefe) and is having trouble getting the locals to appreciate her act. The main problem she’s having is that she doesn’t have the immediate sex appeal of castanet-wielding dancer Clo-Clo (Margo). Jerry comes up with the brilliant idea of having Kiki walk into the club with a black leopard on a leash during Clo-Clo’s act. She does, and Clo-Clo reacts by startling the panther and causing it to run off.

Naturally, a hunt begins to find the animal, but not soon enough; a young girl is mauled and killed by the leopard. Both Jerry and Kiki naturally feel guilt over this, and Jerry is also on the hook for the price of the leopard to its handler, Charlie How-Come (Abner Bieberman). A full search is put on for the missing cat, involving local police chief Roblos (Ben Bard) and Dr. Galbraith (James Bell), who curates the local museum.

The cat strikes again when another girl, Consuelo (Tuulikki Paananen), who was visiting the grave of her father on her birthday. The town is gripped by fear of the deadly leopard, but with this killing, Jerry is far less certain of the cat’s guilt. Charlie How-Come agrees. He suggests that the first death was likely caused by the leopard’s panic, but the cat would have no reason to kill the second girl. Since this is a Tourneur film, we need to get a little of the otherworldly into the picture. This comes via fortune teller Maria (Isabel Jewell), who frequently foretells the death of Clo-Clo, which makes it a foregone conclusion that the third victim here will be her.

The first cat attack is by far the strongest scare moment of the film. We see a young girl (Margaret Landry) going to the story at the behest of her mother when she encounters the leopard on her way home. We don’t see the actual attack. What we do see is the inside of the house, we hear the poor girl screaming from the other side of the door, and then see a stream of blood flowing under the door jamb. It’s effective without showing anything, and far more terrible because it doesn’t show more than it does. It’s all the more terrible because this is a young child being killed.

The biggest issue with The Leopard Man is its length. It barely reaches a length that qualifies it as a feature film. It’s just 66 minutes long. Right when it’s starting to get interesting, the film is over. It may be that the thin plot couldn’t support much more than we’re given here. It might also be the case that the budget couldn’t support more than a film that just scrapes past an hour. Either way, it feels too scant, and it needs more.

The truth is that The Leopard Man doesn’t have a great plot and the acting is pretty standard for this sort of film in this era. What it has, though, is atmosphere. The entire point of watching this film is to experience that build of dread. This isn’t the best of Tourneur’s films or of the films Val Lewton produced. Cat People and I Walked with a Zombie are superior films in almost every respect, and Tourneur’s Out of the Past is a true masterpiece. But The Leopard Man is good for what it is. It’s atmospheric, dark, and shows a clear influence on films that come after it in creating that sort of atmosphere.

Why to watch The Leopard Man: Val Lewton and Jacques Tourneur were one of the great movie teams of all time.
Why not to watch: It’s so short that it ends just as it’s getting interesting.

Posted by SJHoneywell at 1:35 PM