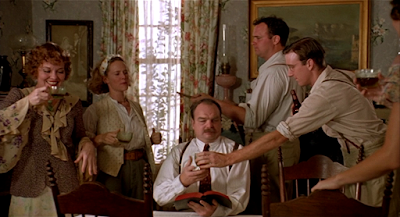 Fried Green Tomatoes was a hard sell for me. It’s a movie I tried to watch some time ago and didn’t get past the first 20 minutes. It’s also one I’ve checked out of the library more than once but haven’t watched. Knowing it was due back to the library in a couple of days, I figured I’d grit my teeth and get on with it. I was not looking forward to it, but knew that I had to watch it at some point, and today seemed like a good enough day to get through it.

For what it’s worth, one thing I’m willing to do is admit when I’m wrong, and I was wrong about Fried Green Tomatoes. I’m not precisely sure when it happened, but at some point in the watching, I realized that I was enjoying the story, and by the end, I realized I liked this quite a bit. It snuck up on me. I didn’t expect to enjoy myself, and ended up liking it pretty well.

There are two stories that run concurrently in Fried Green Tomatoes. The first takes place more or less in the film’s present. Evelyn Couch (Kathy Bates) and her husband (Gailard Sartain) are visiting a relative in a nursing home, and it’s clear from the outset that Evelyn is not a favorite of the person they are visiting. She waits outside the room where she meets Ninny Threadgoode (Jessica Tandy). Ninny claims that she is just there helping a friend get accustomed to the place, and begins telling Evelyn her life story.

That story is the main thrust of the film. It concerns Idgie Threadgoode (Mary Stuart Masterson), whom Ninny describes as her sister-in-law. It also concerns Idgie’s friend Ruth Jamison (Mary-Louise Parker), Ruth’s failed marriage, and the possible murder of her husband Frank Bennett (Nick Searcy). It also concerns the now-abandoned town of Whistle Stop, AL, where Idgie and Ruth ran the Whistle Stop café with their friend Sipsey (Cicely Tyson) and her son Big George (Stan Shaw).

As it happens, Evelyn fails to ever get into the room of her in-law, and spends visits to the home speaking to Ninny, wanting more and more of the story about Idgie and Ruth. Soon, this continuing story empowers her in ways that the women’s classes and seminars she takes don’t. Evelyn discovers that there’s a great deal that she can actually accomplish, perhaps even finding a way to fix what her marriage has become with her inattentive husband.

There’s quite a bit that happens here, and I don’t really want to go into a great deal of detail. Fried Green Tomatoes is one of those movies that has a big reveal moment. It’s likely that, even if you haven’t seen the movie you know at least part of the reveal. It’s the getting there that is interesting though, even if you know where it’s going.

There are a couple of important things that need to be discussed here. The first concerns the various performances. There are four of real note. Jessica Tandy swung a Best Supporting Actress nomination for her role as Ninny, and she’s hard to dislike. As it happens, 1991 had some clear room for improvement in the Best Actress category (we’ll get there eventually), and I could see both Mary Stuart Masterson and Kathy Bates nominated. The weak link here is Mary-Louise Parker, who simply can’t stand up to the others. Ruth comes across as a little dim, and I’m not sure that’s the right way to play her.

In terms of smaller roles, I like Cicely Tyson quite a bit, and she’s good here. I’m also a big fan of Stan Shaw, and am always happy to see him in a role. Also noteworthy is Gary Basaraba as Grady, the local sheriff who has a little crush on Idgie. There’s a particularly great moment with him after he’s been dressed down by Idgie that plays out in an unexpected way and makes him suddenly sympathetic.

The biggest miss here is something that I’ve been assured happens in the book. That’s the idea that Idgie and Ruth are unmistakably lovers. There’s a scene in the middle of the film that implies this strongly and a few hints here and there. For a story that, at least in that part, takes place in the 1930s in Alabama, the hint of a lesbian relationship would certainly be shocking, but it’s obviously a part of the story. I’m not sure what was gained from avoiding it here. I’m not specifically asking for a Blue is the Warmest Color-style scene, but it’s something would definitely change the narrative in a way that the narrative is clearly headed.

Was that still too controversial in 1991? It’s hard to remember, honestly. It may have been for a film. Still, that’s the only miss here in a film that I expected to endure and ended up enjoying a hell of a lot more than I thought I would.

Why to watch Fried Green Tomatoes: “Heart-warming” is a term I don’t use often, but it applies here.
Why not to watch: There’s a major subtext here that is ignored completely.