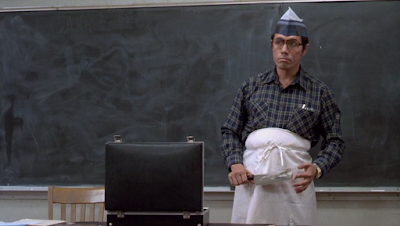 Years ago, before I was a teacher, I worked as a freelance writer and proofreader. It was a pretty cool job, but I wanted to do something more and different with my life. That’s relevant when today’s movie is Stand and Deliver. This is one of those “inspirational teacher” stories that says right in the beginning that it’s based on a true story. Fair enough. Good teacher, underprivileged kids and underserved community, Hollywood ending. Sometimes that’s what I need.

In this case, Jaime Escalante (Edward James Olmos) is the teacher in question, who has given up his previous career to teach at the local high school. In this case, the local high school is one that is just about to lose its accreditation because of the failure of a great number of its students. Jaime is supposed to teach computers, but the school no longer has any computers and he’s instead turned into a math teacher.

On his first day, he discovers that his students are exactly what we expect them to be in this sort of story. There are one or two who seem like they might be teachable and capable and the rest are more concerned with sex and slacking off. Jaime has an interesting way of getting through to his students, and it certainly helps him that he shares a cultural and ethnic background with the majority of his students. Suddenly most of his students are doing well, and Jaime wants to push them further by teaching them calculus and having them take an advance placement class to get college credit.

Most of the middle of the film deals with the problems that Jaime and his students experience. Ana (Vanessa Marquez) is being forced to drop out of school by her father, who wants her to work in the family restaurant. Angel (Lou Diamond Phillips) is mixed up with a gang, and has an ailing grandmother. Jaime himself is accused by his wife Fabiola (Rosanna DeSoto) of ignoring his family for the sake of his students. In fact, Jaime seems to spend all of his time dealing with his students, and even starts tutoring English for free. He’s slowed down a bit with a mild heart attack, but a few days later he’s back in the classroom against his doctor’s orders.

The third act is all about the test and what happens afterward. Escalante’s kids do surprisingly well on the test, smashing the average. However, they all seem to miss the same questions on the test and make similar errors. This brings in Ramirez (Andy Garcia) and Pearson (Rif Hutton) from the testing company, who are convinced that the kids somehow managed to cheat. The only way for them to clear their names is to retake the test, one that will be considerably more difficult, and this time done under the direct supervision and scrutiny of the testing service itself.

I won’t go into detail about how it ends, but I’m guessing you can come up with something close to the answer without me telling you.

Edward James Olmos and his nomination are the reasons I watched this in the first place. Olmos is a fine actor, and he’s quite good in this. What he is more than anything is completely believable as a guy who really wants the best for his students. In fact, I like Olmos more than I like Jaime Escalante in a lot of respects. Escalante is the sort of guy who appears that he will do anything for his students, but also will brook not a single excuse. When Angel shows up late one day because he was sitting with his grandmother at the hospital, Jaime kicks him out of the program. No excuses. I get it, but that sort of thing doesn’t hold a lot of water with me.

So let’s talk about where Stand and Deliver doesn’t work, and it’s a big problem. There is no real conflict in this film until the third act when the kids are accused of cheating. Escalante gets them to accept his teaching style and devote themselves entirely to math and eventually calculus without any issues. In fact, his biggest problem is Angel, and it takes him only a couple of days to get Angel to jump on board, even giving him an extra textbook to take home so he doesn’t have to have his friends see him carrying a book home. There’s no struggle here, and so the film lacks a real structure until the end.

I like Stand and Deliver almost in spite of itself. The kids fall into too many character stereotypes and it’s far too easy to turn the testing service into bad guys (and mildly dirty pool making one Hispanic and one African-American, playing the race card while not playing the race card). Still, it’s hard not to like it at least a little bit.

Why to watch Stand and Deliver: Math is pretty cool, and so are stories about it.
Why not to watch: We don’t really get to a major plot point until the third act.