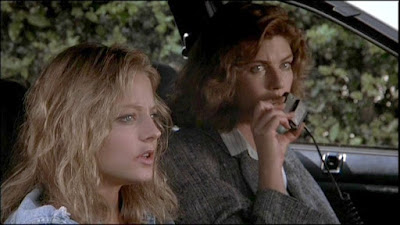 I’ve complained in the last few weeks about the number of Holocaust movies I’ve watched and of being a bit burned out on them. That’s sort of an unpleasant thing to admit, because I’m also of the opinion that movies about that are the sort that we should keep front and center. I’m about to say the same thing about another genre of film. I wonder about how often rape is used as a plot device. There are plenty of times when it’s simply an unpleasant part of the film that is there to motivate someone or move the action along. In the case of a movie like The Accused, it’s the entire point of the film. This is a movie that starts with the rape and spends the rest of the movie revisiting it.

Yes, this is going to be as unpleasant as it sounds like it’s going to be. While the film starts with the rape, it really starts with the aftermath, with victim Sarah Tobias (Jodie Foster), clothes torn, running out of the bar where the rape happened. It’s not until the end of the movie where we actually see the events in question. According to the trivia page on IMDB, the filming of the rape sequence caused one of the male actors to vomit, and Jodie Foster herself claims to have no memory of it despite frequent rehearsals.

Anyway, Sarah is taken to the hospital where she soon meets assistant district attorney Kathryn Murphy (Kelly McGillis), who absolutely wants to prosecute the rapists. The problem is that Sarah, in 1988, is not a good client. She was drunk, had been smoking pot, had been flirting with the men in question, and generally comes across as low class and the sort of woman who, in the words of several, “put on a show.” Wanting to get the three men accused some time in prison. , Kathryn makes a deal with the devil, more or less. She agrees to reduced charges of reckless endangerment, which gets the three a five-year sentence that will almost certainly be reduced to nine months.

Sarah, naturally, is incensed by this. She’s offended by being told essentially that she’s not good enough to testify in court about what happened to her. When she encounters one of the men who witnessed the gang rape and cheered it on, she rams his truck with her car and winds up in the hospital. At this point, Kathryn realizes exactly the deal that she has made and decides to fix things. Since the actual rapists are already in prison on a reduced charge, the only thing she can do is go after the men who abetted the crime by cheering it by charging them with criminal solicitation.

The actual filmed rape sequence is brutal and nasty, and it takes place during the testimony of a witness named Ken Joyce (Bernie Coulson), the friend of one of the rapists and the person who made a 911 call following the crime. It goes on for a long time, and it is really ugly. I’m not a connoisseur of filmed rapes, but I put this one high on the unpleasant scale, a step or two below the brutal sequence in Irreversible.

The Accused brings up a lot of ugly and unpleasant things. One wonders exactly who the accused is here. The rapists are accused, of course, and go to prison. Sarah is also accused—accused of being a slut and for deserving what happened to her. So are the three men accused of criminal solicitation. And so are just about everyone else in the bar. One of the ugliest parts of this is that Sarah’s friend Sally (Ann Hearn) more or less witnesses what happens and doesn’t say anything or really even defend her friend. One of Kathryn’s coworkers actively works against her case, and he’s accused, too.

What’s surprising to me is how relevant this still is today. The Brock Turner case was decided less than a year ago, and the accused in that case served a mere three months for sexually assaulting an unconscious woman. That’s an awful crime and a sentence that doesn’t fit, something that happens in a place where victims of crimes like this are often seen less as victims and more as instigators. That is what happens in the movie here, and it’s what still happens too frequently today.

This isn’t a film that I’d look forward to watching again. It’s well acted throughout, although it’s clearly Jodie Foster’s film. As good as Kelly McGillis could be at times, she’s actually pretty replaceable in this. Anyone who looked good in a power suit and who could look outraged could have pulled off this role well. Foster, though, needs to be sympathetic and still the sort of person who would get the sideways glance and the upturned nose. She has to be believable in both sides of the role, and she is.

But I don’t want to watch it again. The first part of the film is fueled by Sarah’s justifiable rage and the second part is fueled by the long and unpleasant rape sequence. It’s still worth seeing and it’s still relevant, but that doesn’t make it nice.

Why to watch The Accused: Justice tastes good.
Why not to watch: Rape culture is ugly.