Wednesday Horror: Lemora: A Child's Tale of the Supernatural

Film: Lemora: A Child’s Tale of the Supernatural
Format: DVD from NetFlix on laptop. 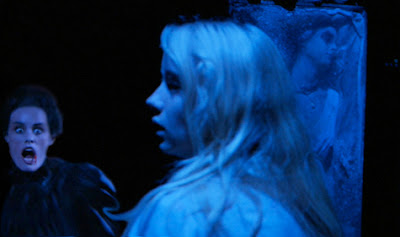 I’ve heard of Lemora: A Child’s Tale of the Supernatural (which I’ll be calling Lemora from this point forward until the very end), but I knew nothing more than it was a vampire movie before watching it. It doesn’t start like a vampire horror movie, though. We have a man walking in on what is presumably his wife with another man and shooting them both down. He runs off and gets in an accident. Then, apparently we jump forward in time and are introduced to Lila Lee (Cheryl Smith). Lila is now the ward of a church run by an unnamed reverend (played by director Richard Blackburn). She’s known in the area for her singing voice, and she sings in the church regularly.

Out of nowhere, Lila gets a letter that tells her to come visit her father, who is ill and about to die. She runs away from the church and hops a bus to a town called Astaroth. On the way, the bus (of which she is the only passenger) gets attacked by creatures in a swamp leading to the town. The creatures are vampire-like, but also appear to be mindless. Lila is rescued from the creatures by a woman named Lemora (Lesley Gilb), who takes Lila back to her house. Lila is left on her own for some time, but she eventually seems to catch the fancy of her new host.

The problem is that Lemora is also a vampire. Astaroth is plagued with two kinds of vampires. There are those like the ones in the swamp that are essentially animals hunting for blood, and some more like Lemora who are essentially human, even though they still crave blood for their survival. In Lemora’s case, she feeds specifically on children, and her house contains a number of weird, creepy children who have high-pitched and annoying laughs (and they laugh at everything).

Over time, we learn a few important things. First, Lila’s father was indeed someone who lived in this house for some time. Second, Lila’s father is now one of the degraded vampires lurking around the swamp. Third, the reverend has decided to hunt for Lila himself, and is approaching Asteroth in the hopes of reclaiming his missing ward.

That’s a great deal to cover for a film that runs a mere 85 minutes, and so a lot of the film does seem to get a bit short-changed. In fact, a lot of elements of plot and story are more or less pushed to the wayside so that Lemora can emphasize what it really wants to, which is the sexualization of Lila. For what it’s worth, there’s only implied nudity in the film in terms of Lila (she takes a bath at one point, but nothing is shown) and Cheryl Smith was 18 at the time. However, Lila is 13, and it is clear that the film sees her sexually even though she doesn’t see herself that way. The man who sells her a bus ticket and the bus driver in particular are leery and pederast-y when they talk to her, and several other characters are convinced that the reverend’s keeping of Lila as a ward is for sexual reasons.

Honestly, I’m not entirely sure how to react to that. It’s not simply the sexualizing of the character, but how overtly disturbing it’s made to be in every instance.

Lemora also very much wants to be an artistic statement. This is a film that is filled with artistic shots and some very dark lighting. This appears to have been done at least in part to up the scare factor of particular scenes, possibly to downplay the goofy makeup on the feral vampires, but also to up the film’s artistic credibility.

The biggest takeaway from Lemora, though, is that it’s cheap and very poorly acted. The leering creeps making sexual innuendos at poor Lila are by far the worst offenders. I’m guessing director Blackburn wanted it obvious that they were more or less treating a child sexually, but it’s pretty extreme. Some of the discomfort naturally comes from old men trying to bed a 13-year-old, but a lot of it is simply that these guys aren’t very good actors.

What does work here, though, is the theme of the corruption of innocence. Lila isn’t smart enough or worldly enough to know that she’s being corrupted, which is precisely why and how it can happen. Her own naivety and dependence on religious belief are what makes her both a temptation for everyone in the film and keeps her oblivious to everyone else’s nefarious ends. That does work, and that’s pretty interesting. It’s just not that great at getting us there.

Why to watch Lemora: A Child’s Tale of the Supernatural: It’s a pretty singular vision.
Why not to watch: It creepily sexualizes a 13-year-old character.

Posted by SJHoneywell at 4:46 PM

Email ThisBlogThis!Share to TwitterShare to FacebookShare to Pinterest
Labels: horror, Lemora, Lemora: A Child’s Tale of the Supernatural, Richard Blackburn