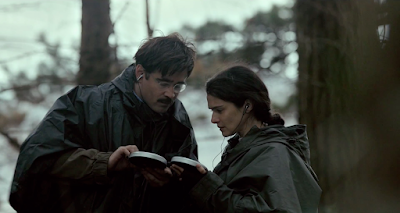 Author James Morrow wrote a book called “City of Truth” in which the characters are unable to lie. Every conversation is brutally frank and honest because even the smallest lie has been conditioned out of people. The main character of the book must learn to lie in order to save his seriously ill son. I thought that The Invention of Lying was the closest approximation to that story in the world of film, and it probably is. However, I would not be surprised if the writers of The Lobster were familiar with that book, since the conversations that happen in this film are about as close to Morrow’s book as I’ve ever seen.

The Lobster, much like Being John Malkovich or Jasper Fforde’s “Grey” series, trades on its inherent weirdness. This is a film that is really all about premise more than it is about anything else. If you can buy into the obviously allegorical premise, the movie is an interesting one, but there will be a percentage of the population that simply can’t get past the incredibly strange premise that we’re given.

So what is that premise? People live in a city and are required to have a life partner. When David (Colin Farrell) discovers that his wife has left him, he is taken to an unnamed hotel. Here he has 45 days to find a new life partner. The two must not only be compatible, they must have some obvious thing in common. If a hotel resident goes the full 45 days without meeting someone, that person is turned into an animal of his or her choice. David’s choice for a variety of reasons, is to be turned into a lobster, hence the name of the film.

There are other rules at the hotel as well. Certain areas are off-limits to single people. Potential couples are given a double room and a chance to discover if they are truly compatible. There are also people who escape from the hotel and who live in the surrounding forest. Those staying in the hotel participate in hunts through the forest, earning an extra day for each person he or she tranquilizes and brings back to the hotel.

David, who is the only named character, soon meets a variety of people at the hotel. The Limping Man (Ben Whishaw) and the Lisping Man (John C. Reilly) soon become something like his friends, while the Biscuit-Loving Woman (Ashley Jensen) becomes a potential mate, although not someone David pursues. The Limping Man sets his sights on Nosebleed Woman (Jessica Barden). However, since the two of them do not have an obvious feature in common, he repeatedly slams his face into things to cause his nose to bleed. David decides to pair himself with the Heartless Woman (Angeliki Papoulia), who has no observable emotions. When she discovers that they are not truly compatible, David escapes the hotel and runs to the forest where he meets the Loners.

The Loners have their own bizarre rules. There is no physical affection allowed between the people who live in the forest. The leader of the loners (Lea Seydoux) enforces these rules bluntly. This does not stop David from falling in love with the Short-Sighted Woman (Rachel Weisz), who also narrates the film. Now, the two need to find a way out of the forest and get to the City where they believe they can live together happily.

So let’s talk instead about just how odd this film is. The premise is obviously weird, and that’s certainly a part of the draw here. But beyond that, the presentation is bizarre as well. As I mentioned above, conversations are oddly frank and strange. People in the hotel are desperate to find anything in common with other people in the hotel, and so they talk about odd pieces of trivia and bits of dull information. These conversations are incredibly uncomfortable in many cases just because they are so strange. Coupled with the bizarre rules of the hotel, which include required sexual stimulation from the hotel staff and a punishable ban on masturbation, and you’re left with something that is frequently cringe-worthy in the watching.

The real question is whether or not I liked The Lobster, and it’s a case where I honestly don’t know the answer. I think it’s a film I want to like a lot more than I actually do like it. I want to appreciate the strangeness because there are plenty of weird movies that I really do like. But there’s something off-putting about The Lobster that rubs me the wrong way. Maybe it’s the presence of Colin Farrell, who I typically dislike. I don’t think it’s that, though. I didn’t really like anyone in the movie, despite liking a number of the actors. And maybe that’s what really stopped me from liking this more than I actually do.