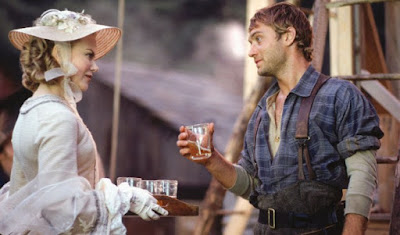 I’m not sure what compelled me to watch Cold Mountain today. It might be that it was one of the longest movies still on my list of films and it was available. It might be that I’m not a fan of Renee Zellweger and there are still too many of her movies I have yet to see. Maybe I’m just a masochist. Cold Mountain isn’t a bad movie. In fact, it’s very well made. But it’s one of those movies where nothing good happens to anyone and everything is terribly tragic. It’s like Game of Thrones, American Civil War edition.

It’s also very oddly cast. Don’t get me wrong here; the cast is an excellent one. It’s just a strange one for a film that takes place during the American Civil War. It stars Brit Jude Law romancing Australian Nicole Kidman and features major roles from Irishman Brendan Gleeson and Brit Ray Winstone. There are also small roles for Canadian Donald Sutherland and Irishman Cillian Murphy. All of them but Murphy play Southerners; Murphy plays a Yank.

Just before the start of the war, Reverend Monroe (Sutherland) moves with his daughter Ada (Kidman) to the small North Carolina town of Cold Mountain. It is here that Ada meets W.P. Inman (Law), whom everyone calls by his last name. The two are attracted to each other, but the war starts almost immediately after. Inman, and most of the other young men of the town, march off to war. Ada gives him a tintype of herself despite the fact that there are no real promises between them.

The narrative switches off between what is happening to Ada and what is happening to Inman. Inman is wounded multiple times and eventually, when he gets another letter from Ada begging him to come home, he deserts and heads back to North Carolina. This is despite the warnings from others and the reality of the Home Guard lead by Teague (Winstone) who are given free rein to go anywhere and kill anyone they suspect of being a deserter.

Along the way, Inman meets up with a fallen preacher named Veasey (Philip Seymour Hoffman) who is kicked out of his town for getting a slave pregnant. The two travel for a bit, but are eventually captured by the Confederacy, but are freed when a Union patrol comes near them. Inman is pretty much the only one to walk away from that encounter. Eventually, he winds up with a widow (Natalie Portman) living with her young son at least temporarily.

Meanwhile, Ada’s father dies suddenly, leaving her essentially penniless and without the skills to work the farm. The locals take pity on her and send her Ruby (Renee Zellweger) to help. Ruby knows how to take care of the place and does so, and is the lone comedic element of the film. Ruby is no-nonsense and takes charge of things immediately. She’s brash and has no filter, and so serves as the leavening in a film that is otherwise relentlessly dark. Ruby’s father (Brendan Gleeson) shows up, having faked his own death. He forms up a small band with a couple of musicians including a mandolin player named Georgia (Jack White, yes, that Jack White). But Teague is a constant worry, and eventually Inman is going to get home to Ada and Teague is going to follow close behind.

Cold Mountain is, as I said, one of those movies where nothing good happens much to anyone. People are introduced to us and soon killed off because that’s the way this works. In the context of the movie, the Union Army is made up of thieves and rapists and the Home Guard consists of bullies and thugs. There are plenty of people we’re supposed to like here, and most of them are going to end up dead. Why? Because fuck you.

Here’s the thing: I wanted to like Cold Mountain, and there are parts of it that I did like. By the end, though, I was just ready for it to be over. It’s too damn long and too much of the same thing over and over. There are people who meet up with each other, then a bunch of people shoot each other. Repeat for about 2 ½ hours until the credits roll. It is almost literally that—slight variations on the same thing happening over and over. The cast doesn’t ever seem to get any smaller, either, because more people show up so they can be killed, too.

It’s strange for me to say that Renee Zellweger is the best thing in the film, but there it is. She is more or less playing a Thelma Ritter role, or the sort of role for which Hattie McDaniel became famous. She’s the comedy in a film that is otherwise unrelentingly depressing.

Cold Mountain is well made, but I don’t think I can say I liked it, and I can definitely say that I’m not going to watch it again.

Why to watch Cold Mountain: It’s well made.
Why not to watch: Nothing good happens to anyone.