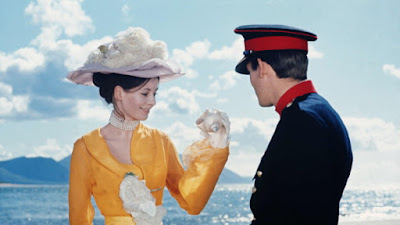 I’m going to do my best not to beat up on Ryan’s Daughter too much, but I gotta say that it’s a difficult temptation to resist. I consider myself a fan of David Lean in general in that I tend to like his films, even the really long ones. Ryan’s Daughter is going to be an exception, though. This is a movie that could have easily been told in the space of Brief Encounter that instead clocks in more at the length of Lawrence of Arabia. Including the intro and outro music as well as the entr’acte, Ryan’s Daughter runs just shy of 210 minutes, and this story could be told in 90 without too much difficulty.

That, more than anything, is the problem with the film. A film like the aforementioned Brief Encounter showed that Lean could tell a real story in a limited scope, since it runs just under 90 minutes. The nearly-four-hour Lawrence of Arabia demonstrates that Lean, when given the right material, could make a true epic that entertained for its entire length, incorporating the landscape as a character in and of itself. Ryan’s Daughter, on the other hand, is a story that is told in that grand epic style for which Lean became known despite being something much better told on the scale of a much smaller film, a problem Lean repeated about a decade and a half later with A Passage to India.

The film takes place in Ireland around the middle of World War I. In a remote corner of Ireland, the natives are, like much of the rest of the country, restless under British rule, and more than a handful of the Irish are hoping Germany will win the war. British occupation is handled sullenly at best. Into this countryside we are given Rosy Ryan (Sarah Miles), our title character. Rosy thinks that the world has more to offer her than this cozy, backward corner of Ireland. What she decides that she wants is the local widower schoolteacher, Charles Shaughnessy (Robert Mitchum). She is attracted to him despite their age difference (Mitchum was 24 years older than Miles) because of his intelligence. He tries to warn her away, telling her that he cannot give her what she wants, but she is undeterred. A wedding ensues, and we’re an hour in.

Now for the complications. Thomas Ryan (the great Leo McKern) is Rosy’s father and the local pub owner. Outwardly, Thomas is fiercely in favor of Irish independence. In truth, he’s the local source of information to the British. A new British commander named Major Randolph Doryan (Christopher Jones) arrives to take command of the local troops. Doryan is a veteran of the war, wounded and shell shocked, and sent to Ireland to more or less keep the peace and give him a rest. Naturally, Rosy is immediately attracted to him and the two begin an passionate clandestine affair.

While all of this is happening, the Irish resistance is attempting to smuggle in German weapons to attack the British, hoping to pull troops away from the front. Thomas Ryan is naturally involved in all of this and is also passing information to Doryan and his men. However, since Rosy’s affair with Doryan is soon the town’s worst-kept secret, it’s Rosy and her cuckolded husband to begin to take the blame when things don’t go well for the resistance.

That might sound complicated, but it’s really not. It’s not like we’re getting endless scenes of Rosy and Randolph Doryan trysting with each other. In fact, it happens only a couple of times before even Charles has caught on to the fact. Hell, even the town’s resident mute and mentally damaged resident Michael (John Mills) has figured out the affair at this point. We get a lot of windswept beaches and hills and Ireland and scenery between scenes of people talking to each other and slow plotting of moving guns in from the coast. Literally about half of the footage here could be scrapped and the entire story kept intact. Sure, it’s pretty and all, but this is hardly a story that required this much scope.

I’m not going to spoil the ending here, but the ending is the best example of this in the entire film. Ryan’s Daughter is more or less done at about the 3-hour mark, and there’s still 26 minutes to go. It ends and ends and ends and never seems to actually end. Even if you kept the four-minute closing music, the final 26 minutes could be easily reduced to eight.

And that, more or less, is the story here. Ryan’s Daughter is easily twice as long as it needs to be. It’s a small story of infidelity writ large, and what it’s writ large onto isn’t really that interesting or deserving of this grand a scale. This is not to say that the Easter Rising isn’t worthy of an epic film; it may well be. But the reaction to the Easter Rising in an out-of-the-way pocket of Ireland is hardly worth the full David Lean treatment.

Sarah Miles is the reason I watched this, since her nomination is the relevant one for this blog. I have to say I’m a bit disappointed here, too. There’s nothing wrong with Miles in the film; there’s just nothing that exceptional about her, either. It’s fine. John Mills won for his role as the brain-addled Michael, and even here, in a performance that is actually pretty good, I’m less than enthusiastic. I don’t know when I’ve been this bored by something starring Robert Mitchum.

If I rank the films of David Lean, I think I’ve found the one that I like less than A Passage to India, and sadly, that says more than anything else I’ve said here to this point.

Why to watch Ryan’s Daughter: Like most of David Lean’s work, it’s pretty to look at.
Why not to watch: Cut it down to 50% and we can talk.

Posted by SJHoneywell at 5:37 PM