Film: Pontypool
Format: Streaming video from NetFlix on The Nook. 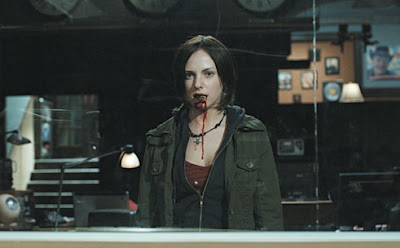 I’m pretty sure it was Nick Jobe who alerted me to the joy that is Pontypool. This is an odd little horror movie that is far better than the acclaim it’s gotten in the wider world. Mention Pontypool to almost anyone, and they look at you like you’re an idiot. This is a case where the knowledge of the film in the film viewing community is directly correlated to the name of the film. The name of the film doesn’t conjure up any particular image, which means it relies on marketing to get the word out. It’s possible for a film like this to become better known—look at Cloverfield, which has the same issue. But Pontypool is all but unknown, cursed by a non-evocative name and a lack of budget.

Like many good horror movies, the idea that drives Pontypool is a good one and a simple one to understand. This is a riff on zombies in the same way that 28 Days Later played with the basic concept by giving us monsters that aren’t truly undead ghouls but have a great deal of similarity to them. This is also an infection film, but—and this is where Pontypool gets interesting—it’s more or less a case of infection of the meme in the way it was originally meant when the term was coined. People don’t get infected physically; they get infected mentally through language.

Grant Mazzy (Stephen McHattie) is a former shock jock reduced to working at the small local radio station outside the town of Pontypool, Ontario. On his way to work, driving through a blizzard, he is accosted by a woman dressed very improperly for the weather and babbling about something. He arrives at work a bit shaken by the experience and questions his listeners with when someone should call 9-11 or let a strange experience simply slide by. With him in the studio are his engineer Laurel-Ann (Georgina Reilly) and studio manager Sydney Briar (Lisa Houle).

Then the reports start coming in of riots occurring around the area. The riots start becoming violent—this is nothing that we see. Instead, we get this only through reports over the phone of increasing and increasingly horrific violence. And then the infection seems to take root inside the radio station, with Laurel-Ann starting to repeat the same word over and over and becoming less and less coherent. The arrival of Dr. Mendez (Hrant Alianak), who seemed to be the center of the first riot, helps to explain things. Somehow, the language itself has become infected—certain words have become toxic and only some words will infect certain people. Once infected, the victim seeks to infect others, which generally ends in horrible violence.

Pontypool is a small movie in the sense that it didn’t have a large budget. It makes do with what it has, though. The gore is pretty limited—there are a couple of moments that are more splattery than the rest of the film, but the gore is pretty subdued in general. Like many good low-budget horror movies, the entire thing except for a scene or two takes place in a single location. Like many other good horror movies in general, most of the real horror comes not from what we’re shown, but what we aren’t. Through all of the chaos, at least for the first part of the film, Grant and Sydney attempt to keep the station running and broadcasting. There is a short sequence of obituaries that stem from the riots. We see none of the chaos and death—we get clips of normal looking people and are instead told of how they died and/or killed others in terrible ways. It’s effective because all of that has to be done in our minds. There’s a natural connection to old radio plays and media events like the Orson Welles War of the Worlds broadcast.

Pontypool isn’t a perfect movie by any stretch of the imagination. The basic concept is interesting, but it’s also the sort of thing that exists in the world of fantasy much more than anywhere else. It’s one of those ideas—a series of essentially toxic memes—that feels like something someone would come up with as a theoretical idea while sitting around with a group after a long night of booze and pot. “Hey, man…what if you could get infection of the language?”

It mostly works, and the problems I have with the film’s premise aren’t the kind of thing that come up during viewing. To me, that’s the mark of a good horror film. Most horror films have a premise that isn’t really possible in the world we live in. If the film is strong enough and acted well enough, those considerations only occur after the credits. Pontypool manages to be that sort of film. The premise is ridiculous if looked at rationally, but while the film is going on, it builds up enough of a consistent world that I buy into it.

More people should know Pontypool. It’s a clever film with a unique idea that works through good writing and performances and a buy-in from the cast. Much of the best horror works because it forces us to piece things together ourselves. Pontypool is that sort of film. The original idea was that the film would be almost entirely audio with just a wavering line representing sound as the only visual. I could see that; it would work that way, and it would work pretty well.

Why to watch Pontypool: An interesting spin on the basic concept of zombies.
Why not to watch: When you tell people you like this movie, they look at you like your dog does when it hears a sound it doesn’t understand.