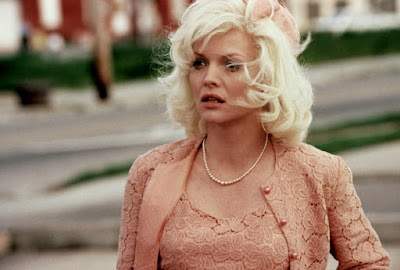 I’ve never been a huge fan of Michelle Pfeiffer. When she’s good, she’s very good (a film like The Fabulous Baker Boys comes to mind), but most of the time, I find her kind of forgettable. I picked up a copy of Love Field some time ago, knowing that it would be a film I’d have to get to eventually, but not really thinking it was something I’d look forward to watching. Discovering that Dennis Haysbert is the costar worked in the film’s favor, though. I generally like Haysbert.

Love Field is about a Dallas housewife with the unlikely name of Lurene Hallett (Pfeiffer) and her obsession with Jackie Kennedy. On that fateful day in 1963, Lurene drives out to the airport to see the Kennedys arrive and misses her chance to speak to Jackie. Then, on the drive home, she finds out about Kennedy’s assassination. Having missed the chance to meet Jackie at the airport, Lurene decides to go to Kennedy’s funeral in Washington against the wishes of her husband Ray (Brian Kerwin).

Lurene buys herself a ticket on a Greyhound bus out of Dallas and finds herself sitting in front of a man (Dennis Haysbert) and his daughter (Stephanie McFadden). Lurene turns out to be a talker and eventually gets that his name is Paul and her name is Jonell. Jonell is not a talker, but she eventually opens up. When the bus is in a near accident and Paul is required to give a statement to the police about what he saw, Lurene takes care of Jonell. She discovers a number of bruises on the girl, and the Jonell claims that Paul is not really her father. Convinced that she has discovered a kidnapping, Lurene calls the FBI from the train station only to discover that Paul really is Jonell’s estranged father and that he has rescued her from an orphanage where she got the bruises.

But now the FBI is after Paul and Jonell, and Lurene decides to go with them, since she is the one who inadvertently caused the problem. Since this is pre-Civil Rights, you can expect that there’s going to be a great deal of racism happening here, especially with a blonde, white woman dressed like Jackie Kennedy riding around in a car with a black man and his daughter. That’s even more the case when the car is one stolen from the Greyhound parking lot.

Naturally, the focus of this is not really on the racism that happens or even the problems associated with Lurene driving around with Paul and Jonell. It’s about a building relationship between Paul and Lurene as well as between Lurene and Jonell, who slowly opens up to her. Meanwhile, in the background of all of these are a series of things happening. First is the FBI hunting for Paul. Second is Ray realizing that his wife may be involved in something he didn’t expect. Third, of course, is the aftermath of the Kennedy assassination, which makes frequent appearances in the corners of the film.

There are some good points to Love Field, but they need to be searched for. This isn’t a bad performance from Michelle Pfeiffer, but it’s not a character I like much in a film I don’t love. Dennis Haysbert—a very young Dennis Haysbert at that—is much better. Actually I don’t want to take anything away from Pfeiffer’s performance. I think it’s much more that I don’t like her character, and that shouldn’t specifically reflect on how well she plays the part.

There are some real problems here, though. First is that a great deal of the movie is telegraphed. From the moment that Paul sits down behind Lurene and the two share a word or two, it’s clear that the film is going to do everything it can to pair these two people together, and it simply does not feel natural. There is no real chemistry between Lurene and Paul, so finding them romantically entangled at the end of the second act feels like something that has happened for plot reasons and not for reasons that deal with the characters themselves. That’s a problem. It’s also a shame, because as Haysbert demonstrated with Far From Heaven, it’s a plot point that he can make work. Both he and Pfeiffer do what they can with this (and the most relevant scene is mercifully short), but it simple doesn’t work with the characters we have.

A bigger problem is the severe tonal shift that happens toward the end of the movie. It starts with Lurene’s obsession with Jackie Kennedy. The middle is about the building relationship between Lurene and both Paul and Jonell. Then, suddenly, the third act of the film wants to be a tense thriller as Lurene and Paul have to fight off Ray and are pursued by the police. This comes out of nowhere and doesn’t make any sense with the rest of the film. It’s almost unconscionable.

Well, I own this damn thing, and as I reflect on this fact, I remember that I bought this because I found it in a bargain bin and that it’s a film NetFlix doesn’t carry. I can’t say that I blame them.

Why to watch Love Field: Dennis Haysbert has the voice of God.
Why not to watch: It's tonally very weird.