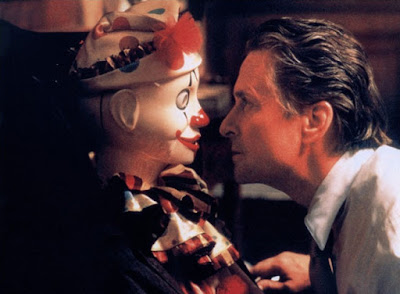 The Game isn’t really a horror film at all despite my placing this as a part of watching horror movies on Wednesday. I’m kind of forced to label it thus, though, because it does appear on one of my horror lists. In reality, this is almost a pure psychological thriller, and it’s a pretty good one. This is something that more or less wants to sit the audience down and screw the viewers’ heads until the final credits roll. That’s pretty much it.

In this case, our main character/victim is Nicholas Van Orton (Michael Douglas), a wealthy banker/investment manager type who has a very specific and regimented life. As the film starts, Nicholas is experiencing his 48th birthday. As it happens, he witnessed his father commit suicide on his 48th birthday, something that has haunted him since that day. His brother Conrad (Sean Penn) offers him a voucher for a game from a company called Consumer Recreation Services, telling him that the company changed his life completely.

Nicholas goes to check the company out and discovers that getting signed in comes with a battery of tests and psychological exams. Shortly after this, he gets a phone call telling him that he has been denied a chance to play a game with the company. However, when he goes home that night, he discovers a body on the driveway right where his father landed when he jumped off the roof. It’s not a real body, but a life-sized mannequin dressed like a clown. Inside the house, Nicholas discovers that the nightly stock market report that he watches starts speaking to him directly, something that is clearly not supposed to happen.

What happens from here becomes quite convoluted, something that is far too involved and twisted for me to spend a great deal of time going through it here. It would take me a good 800 words or more from this point to cover everything that happens to Nicholas, including his involvement with waitress Christine (Deborah Kara Unger) who isn’t a part of the game, except that she is, except that she’s a victim, except that she’s not. Even Conrad isn’t immune to what is happening, possibly being manipulated as much as Nicholas is. In fact, it’s possible that Conrad has gotten is brother involved as a way to get himself out.

The Game is really about one thing in terms of how it wants to interact with the audience. It’s all about keeping Nicholas, and thus the viewer, as off balance as possible. We can never be comfortable. After we see Nicholas betrayed again and again with someone he thought he could trust doing something to demonstrate that his trust was misplaced, we soon become as paranoid as he is. We learn that there is nowhere that the company can’t got, nothing they cannot do, and no one that is worthy of trust. People who aren’t a part of the game suddenly are, and it seems soon enough that everyone that Nicholas sees everywhere around him is somehow connected to what is happening to him. And when he wakes up in a crypt in a Mexican cemetery with all of his bank accounts drained things get very serious.

There are a lot of actors who could do this film pretty well, but I don’t know if there is anyone who could have done this better than Michael Douglas. Douglas manages somehow to be believable as an everyman despite having more wealth than my entire town combined. That’s a rare gift. Just as rare for something like this is that Douglas is capable of revealing his own paranoia slowly, over the course of the film so that each moment that he becomes more and more freaked out of what is happening to him works perfectly.

As I said above The Game isn’t a true horror film. This doesn’t mean that it’s not scary at all. There’s quite a bit here that is upsetting in very real ways. What makes this different is that this isn’t upsetting in that traditional horror movie way, where we’re seeing someone worrying about having something horrible happen physically. Instead, this is true existential dread. There is a very real sense here that all of this may simply be Nicholas losing his mind, with this paranoia simply being something that we’re seeing because it’s the reality he is experiencing, not the reality of the rest of the world. That loss of connection, potentially losing grip with the rest of the world, is not traditionally scary, but no less terrifying.

In fact, the only real issue that I can take with The Game is that it might well be too thorough. There are events here that simply require far too much from the audience to accept. For us to fully buy the ending, we need to be willing to give the film such leeway with reality as we typically experience it that I’m not sure it passes the sniff test. Too many things have to happen just perfectly and at just the right time and in just the right way for us to get the ending the film wants to give us, and in that respect, The Game is too ambitious.

Why to watch The Game: It’s incredibly claustrophobia-inducing, but socially, not physically.
Why not to watch: The entire plot requires a great deal of suspension of disbelief, especially the ending.

Posted by SJHoneywell at 6:23 PM