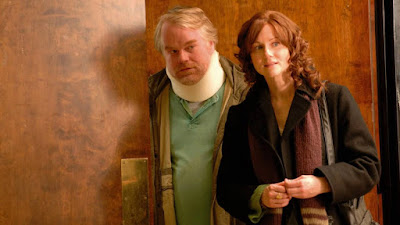 My original plan for the past few days was to watch The Savages last Saturday. I ended up watching The Unsinkable Molly Brown instead because, well, my Blu-ray play crapped out on me. Worse, it wouldn’t turn on or open up, and the disc for The Savages was stuck inside. So here’s what I learned: If this happens to you, unplug the player from the outlet for one minute. Plug it back in, and without turning it on, just hit the eject button. It should pop open. As it happened, my player was fine; it just needed to be reset. So, now that things are working again, I could finally get around to the movie I had planned for three days ago.

I can’t say that I was thrilled with the prospect, honestly. I try to be as neutral as possible for as many films as I can, but there are some things that simply are going to either get me excited or cause me to have some misgivings. In the case of The Savages, my misgivings are twofold. First, I’ve never been a huge fan of Laura Linney. I don’t dislike her in particular; I’ve just never had much of an opinion of her one way or the other. Second, ever since his untimely and senseless death, I’ve been at least a little depressed every time I see Philip Seymour Hoffman. We were supposed to get decades more great movies out of him, and he pissed that away on us. It still hurts.

The Savages is not what anyone would call a plot-driven film. Instead, it is more or less a pair of character sketches. In reality, it’s one main character sketch and one minor one. In terms of the story, we are presented with Lenny Savage (Philip Bosco), an elderly man living with his girlfriend. Lenny is sliding headlong into dementia when said girlfriend dies suddenly. Lenny’s adult children Jon (Hoffman) and Wendy (Linney) come out from the East Coast to be with their estranged father only to discover that he had a non-marital agreement with his girlfriend. This means that despite their 20-year relationship, he has no claim over her house or property. This means that suddenly Jon and Wendy are on the hook for caring for their father.

Jon goes back to Buffalo and finds a nursing home. Wendy brings Lenny out and suffers a great deal of guilt for him being in a home. This is despite the fact that it soon becomes clear that both she and her brother suffered physical and emotional abuse at the hands of their father and that both of them were abandoned by him and their mother at some point.

The main character study here is of Wendy, who is doing her best to deal with everything that she has been handed. She feels a great deal of guilt for putting her father in a nursing home, and attempts to get him moved into a better facility. Despite her guilt, actually possibly the cause of her guilt, comes the knowledge that Wendy is tragically unsuccessful in relationships. Her current one is with a married man (Peter Friedman) 13 years older than she is, a relationship more or less doomed to failure. Wendy has been attempting to get grants to help her finish her play about her and her brother’s dysfunctional childhood, so far with no success.

Jon has his own problems. While a successful drama professor and an evident expert on the works of Berthold Brecht, Jon also has no success maintaining a relationship. His current relationship is coming to an end because his girlfriend’s visa is about to expire and she is being forced to return to Poland. Jon appears to be emotionally unaffected by this, but breaks down in tears when she cooks eggs for him.

What I find interesting here is how closely I relate to the sibling relationships that are presented. I find that my relationships with my own siblings almost directly mirror that of the one between Wendy and Jon. I don’t dislike my siblings at all, but I would have a hard time claiming that I am close to any of them. I’m the youngest, for one thing, and the youngest by a significant amount. My four siblings are closer in age to each other than I am to any one of them. I don’t always feel that I have a great deal in common with them, too. We’re civil, but there wouldn’t be any tears of gnashing of teeth if, for instance, I didn’t show up for Thanksgiving one year.

That’s the sort of relationship that Jon and Wendy have here. They are civil to each other. They don’t dislike each other, but have a mildly strained relationship because they don’t really know each other at all. Each has moved into his or her own life, and while that hasn’t shut out the other person completely, it’s reduced their interaction to something very small and impersonal. Jon and Wendy are siblings, but not friends and are barely acquaintances. I know exactly how that feels. In fact, I feel safe in saying that because I’m about 99 and 44/100ths% sure that no one in my family bothers to read this blog with any regularity. I could be wrong there, but I don’t think so.

There’s something strangely affirming about The Savages. Neither Jon nor Wendy are comic characters. They aren’t losers, and also aren’t people who are the ultimate representatives of their fields. Jon appears to be a decent professor. He’s not a world changer, but also not someone barely hanging on to his job. He’s real. The same is true of Wendy, who could easily be a trainwreck of a character and an attempt at very formulaic comedy. Instead, she’s real, and Laura Linney plays her in a way that makes her even more real. All the main roles are handled with a deft touch here, and that makes the good screenplay The Savages is blessed with so much better.

I liked this. I’m not sure I’d want to watch it again any time soon because it’s very flat emotionally but oddly draining. But I like what’s here.

Why to watch The Savages: It feels real.
Why not to watch: For a film without many emotional peaks and valleys, it’s one that sucks the life out of its viewers.