Simon, Not So Pure 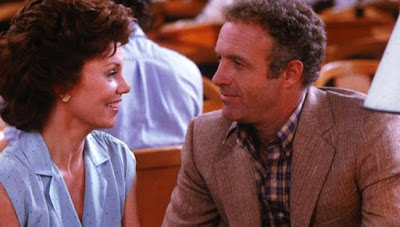 I’ve had Chapter Two sitting on my DVR for just over two years. There are a lot of reasons I didn’t want to pull the trigger on it. I’m not in love with the work of Neil Simon for starters. I also generally don’t think a great deal of Marsha Mason as an actress; I find her generally unappealing and frustrating. Still, I had to get through it eventually, and removing the oldest movie has at least a psychological benefit.

Here’s the other thing about Marsha Mason, though. I’ve now seen three of her Best Actress-nominated performances. In The Goodbye Girl, she plays an aging, unsuccessful actress in a Neil Simon romantic comedy. In Only When I Laugh, she plays a recovering alcoholic actress trying to reestablish her relationship with her daughter in a Neil Simon dramedy. Wedged between those two performances is this one, where she plays a relatively successful stage actress in a romantic dramedy penned by Neil Simon. Are you sensing a pattern here? I sure as hell am. I wonder if Marsha Mason can do anything aside from playing a stage actress in a script written by Neil Simon.

So, strap in because Chapter Two is incredibly autobiographical. In real life, Simon’s wife died, and shortly after, he met Mason and married her. In this movie, a writer named George Schneider (James Caan) is recently widowed. His brother Leo (Joseph Bologna) is determined to get George back into the dating scene as quickly as possible and starts setting him up with dates. Meanwhile, actress Jennie MacLaine (Marsha Mason) is recently divorced. Her friend Faye Medwick (Valerie Harper) is determined that she find a man for herself immediately. You can see where this is going, right?

Actually, the meet-cute is pretty cute. George, looking for a librarian, calls Jennie accidentally since both numbers are written on the same scrap of paper. He then continues to call her over and over until she is both annoyed and intrigued. Eventually, he gets her to agree to a five-minute date. That way, if they don’t like each other, they can get both Leo and Faye off their backs. As it happens, they like each other quite a bit, and one whirlwind romance later, they are married and off on their honeymoon.

This is where the film takes a hard left turn. For whatever reason, George and Jennie have honeymooned in a place where George once went with his wife. When he meets someone that he and his late wife once met at this place, he becomes despondent and distant, and cuts the honeymoon short. Back in New York, he continues to be distant and angry, putting the marriage in jeopardy. Meanwhile, Leo’s marriage is on the rocks, as is Faye’s, the two of them have started something like an affair using Jennie’s old apartment.

Chapter Two is very much a movie of two halves. I’m surprised at how much I enjoyed the first half of the film. It’s actually quite charming. The banter is funny and I liked it. It’s not a first for me with Neil Simon, but it’s the most I’ve actually liked Marsha Mason.

And then we get the second half, where George turns bitter and angry and the film gets spiteful and mean. It’s one of the problems that I often have with Neil Simon scripts. Simon truly writes well, but he’s so capable of writing a one-liner that he goes out of his way to make sure that we know that he wrote a great line. When characters are angry with each other, Simon has them drop terrible cutting remarks of the kind that people don’t actually say in real life. All of Simon’s characters are wickedly smart and devastating, and so there’s a sense of it being theatrical instead of being real. It adds an unnecessary layer of unreality to something that is supposed to mirror reality.

The bigger problem here is something that it pains me to say: James Caan has no business being in this film. I love James Caan. I will function as a James Caan apologist every day of the week and twice on Sundays. I’m almost always willing to watch him in anything. But he doesn’t work as a spy novelist trading banter in an upscale New York apartment. He’s the wrong person here. He does as well as he possibly can, but he’s completely out of place.

A bright spot is Valerie Harper, who never really got as much credit on screen as she should have. She needs more to do here, but she’s wonderful every time she walks across the screen, even if she also plays a character that suffers from Simon’s too-witty and too-smart one-line drops.

Ultimately, I was disappointed in this. I get exactly where it is going. The entire second half of the story trades entirely on the fact that George is dealing with sudden guilt. He feels like he is betraying his late wife and that he doesn’t deserve to be happy. I get that. But it’s mean-spirited and ugly, and that just doesn’t work. Even Mason’s soul-stirring speech at the end doesn’t cut through it enough. For such a good start, Chapter Two crashes hard, and that’s hard to forgive.

Why to watch Chapter Two: The first half is funny and charming.
Why not to watch: The second half is mean.

Posted by SJHoneywell at 7:38 PM