Film: Sons and Lovers
Format: Internet video on The Nook. 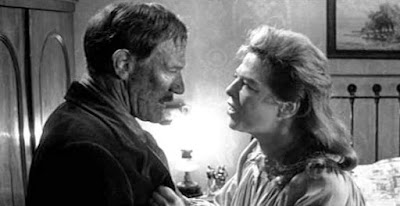 Author D.H. Lawrence is best known for Lady Chatterley’s Lover, which gives the man a particular reputation. I’m not sure what I expected going into Sons and Lovers, but I think I expected something more explicit than what I got. Don’t get me wrong; Sons and Lovers is filled with a weird sexual tension, but it’s a tension that seems to be sublimated throughout, something that exists mostly under the surface. This is also one of the most Freudian movies I’ve seen in a long time. Oedipal stuff is frequently creepy, and that’s right in the wheelhouse of this one.

In the early 20th Century in a small mining town, young Paul Morel (Dean Stockwell) finds himself out of place. Interested in art and literature, he doesn’t seem to fit in with his father Walter (Trevor Howard) or his brother Arthur (Sean Barrett), both of whom work in the mines. Paul’s talent for art has made him a favorite of his mother Gertrude (Wendy Hiller). Well, that, and as the youngest of her three sons, he’s the one that she has found the easiest to manipulate. Paul is definitely and completely under the thumb of his mother, who disapproves of pretty much everyone who isn’t Paul. This is especially true of Paul’s attachment to local girl Miriam Leivers (Heather Sears). >

Miriam’s and Paul’s friendship has been chaste to this point, although the two are very close. Paul is constantly under pressure from his mother to not do anything that would take him away from her. Miriam’s mother (Rosalie Crutchley) keeps her daughter in check with overt religious dogma and browbeating. Paul’s real goal is to follow his brother William (William Lucas) out of the town and into a white collar job. Or, better, to work as an artist. When he places a piece in a local show, he attracts some attention from a potential patron, who offers to help him get to London and study art.

Paul loses this opportunity, though, because of the tense marriage between his parents. He refuses to abandon his mother to living with a man who gets drunk every night and is verbally abusive. Instead, he takes a job in a local garment factory that employs a number of women to make the clothing. It’s here that Paul meets Clara Dawes (Mary Ure), a liberated woman who believes in women’s suffrage and free love. She also happens to be separated from her husband (Conrad Phillips). The two soon begin a relationship, much to the shock and disapproval of everyone who knows about it, particularly Paul’s parents and Clara’s estranged husband. In fact, the strain of this cause Gertrude to fall ill, which brings Paul running to be with his ailing mother.

As mentioned, Sons and Lovers is pure Freud and a textbook example of an Oedipal complex. Paul is not merely dominated by his mother. He realizes that his mother is controlling virtually every aspect of his life, knows that the decisions he makes are made with her in mind before considering his own wants, needs, and desires, and by the end, we discover that Paul is so completely under his mother’s spell that he is completely willing for his entire life to be controlled by her no matter the situation. I realize that these situations exist, but Sons and Lovers is frustrating because of how blatant this is and because of how willingly Paul seems to deal with his life on his mother’s terms.

So let’s talk nominations, specifically in terms of the actors. Among its many nominations, Sons and Lovers earned two acting nominations: Trevor Howard for Best Actor and Mary Ure for Best Supporting Actress. I have trouble with both, although one more than the other. Trevor Howard’s nomination is, as far as I know, still the record holder for being the shortest performance nominated as a lead role. He’s on screen just a touch more than 20 minutes, and the role is clearly supporting. He’d be a fine nomination for that category. Mary Ure’s performance is good as well, but Wendy Hiller seems like she got the short straw here.

The casting of Dean Stockwell is odd. Stockwell handles the role pretty well, but can’t handle the necessary accent at all. It’s inconsistent, coming across as someone desperately wanting everyone to believe he’s British and not quite pulling it off. It’s a distraction.

The movie is not a bad one, but it’s also not a pleasant one. Most of that comes from the story, which I disliked intensely. The biggest problem is that virtually everyone is a textbook example of one neurosis or another. In fact, the only character who seems to know who he is and what he wants is Walter Morel. He wants his son to have a good job, possibly down in the mines like a real man. He wants to drink at night and make sure that there’s food for him when he gets home. He’d like his family to find a little happiness. And in many ways, he’s painted as the villain.

I guess I can see the love for this movie, but it’s not one that I want to watch again, and it’s not one I can say that I liked much despite it being well made.

Why to watch Sons and Lovers: The story is fascinating almost in spite of itself.
Why not to watch: Dean Stockwell’s accent.

Posted by SJHoneywell at 1:03 PM