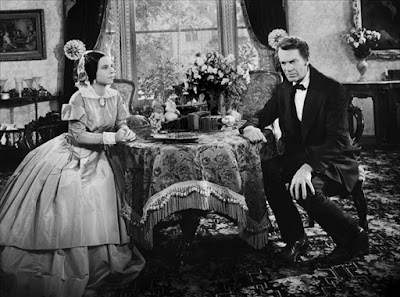 One of the nicknames for Illinois is The Land of Lincoln. Abe Lincoln wasn’t born in Illinois, of course, but he lived here for a long time, and for most people, he’s considered as someone from the state. In terms of presidential birthplaces, we get only Ronald Reagan. Still, you don’t live in Illinois as a schoolchild and not hear a lot about Lincoln. I’ve had Abe Lincoln in Illinois on the DVR for a long time; today seemed as good a day as any to watch it.

This is presented as a biography of some years in Lincoln’s life. Essentially it goes from his early days as an adult to the point where he was first elected president. We don’t get his childhood and we don’t get the Civil War. It’s more about the making of the man who would become president than it is about anything else. It’s also not a straight biography. Oh, I don’t doubt that the information included here isn’t mainly factual. It is a very forgiving look at the 16th president, though, which makes sense for 1940.

The film opens with Lincoln (Raymond Massey) leaving home for the first time to help ship a load of pigs from Illinois to New Orleans. Along the way, the boat gets stuck in New Salem, where Abe meets Ann Rutledge (Mary Howard), with whom he immediately becomes entranced. Shortly thereafter, his boss (Harlan Briggs) says he plans to open a store in New Salem, and Abe leaps at the chance to run it for him if only to be closer to Ann.

Ann already has a man, though, much to Abe’s disappointment. Still, he seeks to better himself, educating himself each night after the shop closes. Ann’s boyfriend leaves town to find his fortune and is gone for years, eventually communicating to her that he doesn’t know when he’ll be back. Abe steps in to court her, but before things can progress too far, Ann falls ill and dies, leaving Abe alone.

Around this same time, Abe is approached by local politicians. He has a good reputation in the area as an honest man and a plain speaker, and he is soon elected to the state assembly, where he serves a single term. It is here that he meets Stephen Douglas (Gene Lockhart), who would eventually become his greatest political rival. After this single term, Lincoln leaves the legislature to study law in Springfield. He meets Mary Todd (Ruth Gordon), who becomes enamored of the tall, uncultured man. Mary is convinced that Abe has greatness in him and cultivates him. This scares Lincoln and he runs, but eventually he returns and the two are married.

Mary’s ambitions for Abe take up the last part of the film. He is selected as a compromise candidate for the presidency, and has his storied debate with Douglas. The results of the election come in, and it’s no surprise to anyone who knows anything about American history that Lincoln wins the election and heads off the Washington and his fateful term as president. Roll credits.

Raymond Massey’s performance as Lincoln is the reason that I watched this, and it’s truly the reason to watch it. While Ruth Gordon is excellent and Gene Lockhart is always worth watching, it’s Massey who takes center stage and the majority of the focus. Massey’s Lincoln is a man who speaks a bit like a hick, but who also speaks with a backwoods wisdom and with great intelligence. He is a man who is unsure of his own talents, believing himself to be much less accomplished than those around him, but who is dedicated to what he believes to be right and true. Massey’s Lincoln has really only a single fault—his inability to believe in himself or in his own personal power. It makes Abe Lincoln in Illinois come across less as a straight biography and more as a wart-free look at an important figure in American politics.

And really, there isn’t a lot more to say about it. Massey is good in the role, and even manages to look a bit like Lincoln in many places. We learn very little about the man himself, though. We know only what could be learned from a young child’s book on the life of Lincoln. We learn that he had depressive moods and a quick wit, and little more.

Abe Lincoln in Illinois is not a film that would fly today. There is simply too much that isn’t covered about the man himself. It’s a purified snapshot of the man’s history and little more. It’s good for what it is, and it’s interesting that in places it paints Mary Todd Lincoln as the main villain. Stephen Douglas comes across not as Lincoln’s enemy or accuser, but as his respectful opposition. It’s Mary who pushes too hard and it’s Mary who embarrasses him publically.

You can find better biopics on Lincoln. This one will do in a pinch, but really, there are better ways to get your history than something this sanitized.

Why to watch Abe Lincoln: The formative years of an important American president.
Why not to watch: It’s more hagiography than biography.

Posted by SJHoneywell at 9:01 PM