A Pie with Legs 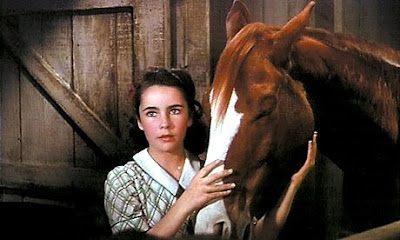 Sometimes you can see a star in the making. National Velvet is that way. This wasn’t Elizabeth Taylor’s first movie; it wasn’t even her first movie with an animal. But it is a case where I don’t know that anyone expected that this would be a star turn for the young actress. She’s billed third on the film after Mickey Rooney and Donald Crisp despite clearly being the star of the film.

National Velvet is an interesting coming-of-age film in a couple of respects. Typically, and as I’ve said multiple times in the past, coming-of-age stories for boys are about death and for girls are about sex. In this case, it’s neither of the above. There’s not any death here and our main character is far too young for sex to be involved. This is a good thing, and noteworthy, really. It’s a little bit surprising, and I’m all for that.

We start with the beginning of summer and the release of children for their summer break in England. While it’s never specifically mentioned when the film takes place, I get the feeling that it’s between the World Wars. While there are plenty of horses and no cars, the clothing and the people feel a great deal like they are part of a more modern world. Anyway, the three Brown sisters are among those discharged, and the big “scandal” among them is that Edwina (Angela Lansbury), the eldest, is rushing off to meet a boy.

The other two sisters have their own fascinations. Middle daughter Malvolia (Juanita Quigley) is obsessed with canaries while third daughter Velvet (Liz Taylor) is over the moon about horses. She’s always liked horses, but it’s not until she sees the new gelding possessed by local farmer Ede (Reginald Owen) that she truly falls in love. Velvet decides to call the horse The Pie since Ede calls it a pirate. This meeting with The Pie coincides with Velvet meeting young Mi Taylor (Mickey Rooney), who is wandering through the countryside. As it happens, Mi is on a mission to contact people in his late father’s address book, and Velvet’s mother (Anne Revere) is in the book. What Mi doesn’t know is that when she was young, Mrs. Brown swam the English Channel and Mi’s father was her coach.

The Pie becomes a nuisance for Ede, and eventually he raffles it off. And, of course, Velvet wins the horse and is soon caught up in thoughts of running the horse in the Grand National, which in the world of the film is the single greatest horse race in all of horse racing. Mi is dead set against it, but Velvet’s mother is far more understanding than most mothers would ever possibly be and happens to have the entry fee, since she’s managed to keep all of her prize money from swimming the Channel back in the day.

The big question in all of this is Mi Taylor. When Mi arrives, he discovers where Mrs. Brown keeps her money and in fact steals it. He puts it back when he’s offered a job and no one is the wiser, but it certainly makes the audience mistrust him. So, when he’s sent to London with the money to enter the horse, it certainly makes us wonder what’s going to happen to the money. We also learn exactly why Mi seems to be so reticent around horses. Mi was a jockey once and suffered a bad accident, which put him off riding.

Oh, there will be trouble a-plenty, of course and problems finding and keeping a jockey to ride The Pie in the Grand National, but this is very much a family movie, and while we may not get the ending that we think we’re going to get, we’re going to get the sort of ending that will make everyone happy. There’s no shock in this, and it might well be par for the course for this sort of coming-of-age film from this particular era of film.

Almost in spite of itself, I kind of liked National Velvet. Seriously, and yes this is something of a spoiler, it’s nice to see a movie where a kid has a passion that involves an animal in which the animal doesn’t die by the end of the film. Seriously, after Kes, Old Yeller, The Yearling and I don’t know how many others, it was refreshing to have the animal still on its feet when the final frame rolls.

National Velvet is the story of a dream, and of working for a dream. It moves a bit too quickly in places, but it’s hard to fully dislike a movie that really wants to tell a nice story without it becoming dark. I like dark stories as much or more than most people, but sometimes, it’s okay to have a little sweetness, even bittersweetness.

It would be nice if they’d figured out a way to give Liz Taylor and Mickey Rooney consistent accents, though. Still, it’s a small price to pay for a story that, like it or not, really is kind of sweet and pleasant. I can imagine a lot of young kids liking this, even now, and for that, I give it a great deal of credit. If you need something else to cock your head sideways about, consider this: There is a sequel to National Velvet called International Velvet, which involves a horse that is the son of The Pie. In National Velvet, The Pie is repeatedly said to be a gelding. Think about that for a moment. Take all the time you need.

Why to watch National Velvet: It’s a sweet story, almost in spite of itself.
Why not to watch: Who the hell names a kid “Velvet”?