I Enjoy Being a Girl 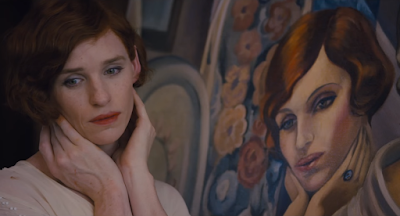 I’m not sure why I recorded The Danish Girl off HBO. It’s not like the movie is hard to find, and with HBO Go, I can watch it whenever. But, I did record it, and since the DVR is constantly in danger of being overloaded, I figured I’d watch it today. I knew the basics of the film—it’s a somewhat fictionalized story of one of the first transsexuals to undergo gender reassignment. Fair enough, although I can’t say it’s a topic that particularly interests me.

Another problem is Eddie Redmayne, who does very little for me. I admit that he did a fine impression of Stephen Hawking in The Theory of Everything, but Redmayne is a great example of the German expression “Backpfeifengesicht,” or a face that is asking to be slapped. There’s something about this man’s visage that makes my hand ball up into a fist. I’m not sure what it is.

Anyway, Sherman, set the Wayback Machine for 1920-ish Denmark. Here we encounter landscape artist Einar Wegener (Redmayne) and his wife, portrait artist Gerda Wegener (Alicia Vikander). When her model shows up late one day, she asks Einar to sit in for her, which involves him wearing women’s clothing. This event seems to trigger in Einar a long-repressed identification as a woman. This new personality finds freer and freer expression in Einar, and he names this alter-ego Lili Elbe. Soon enough, Einar is essentially gone and only Lili remains. She takes to wearing women’s clothing and even flirting with men. This is naturally difficult on Gerda, who is ironically having a resurgence in the popularity of her work, thanks to Lili frequently posing for her.

Eventually, Gerda hunts down art dealer Hans Axgil (Matthias Schoenaerts), a childhood friend of Einar, who, we learn once met Lili. Essentially, Einar had the Lili persona year before but had repressed it. Lili deals with this emerging personality as best she can, as does Gerda, who finds herself suddenly without a husband despite still being married. Various attempts at psychoanalysis and treatment fail until Lili encounters Dr. Kurt Warnekros (Sebastian Koch), who explains that Lili is not the first person he has met who is physically male but identifies as female. Ultimately, Lili agrees to gender reassignment surgery, becoming one of the first to go through the process.

With a story like this one, it is almost imperative that the audience at least like the main characters, and that’s where I have trouble with The Danish Girl. I have no issues with poor Gerda, who has her life completely turned upside down by everything that happens. Nothing that happens to her is her fault and she doesn’t ask for any of it. I don’t have any real issues with Hans, either. Surprisingly for the time, Hans is incredibly supportive of Lili’s transformation.

No, it’s Lili herself with whom I have a problem. As portrayed in the film, Einar/Lili is one of the most selfish, self-absorbed characters I have come across. I take no issue with transgendered individuals, but I do take issue with this level of egocentricity. I fully understand that Lili has this need for gender reassignment, that Einar simply isn’t who she is. But despite the frequent professions of love for Gerda, Lili is happy to essentially destroy Gerda’s life. I have trouble with this. I don’t have a better way of expressing that, though. It just bothers me that someone would be this completely wrapped up in him- or herself to not even take note of the suffering he or she is causing to a loved one.

And so, The Danish Girl fell pretty flat for me. I don’t even have a great deal to say about it beyond the fact that I intensely disliked the main character, and that the main character in question was played by an actor whom I don’t particularly love. Alicia Vikander, on the other hand, is excellent. She gives a completely sympathetic performance, and while I haven’t seen all of the nominated actresses in the supporting category, I think her nomination (and possibly her win) was deserved.

The interest here seems to be entirely about the idea that Einar/Lili was one of the first to go through this, but the story really isn’t that interesting. Transamerica is a much better story and a much better film, and features a much more likeable character in a strong performance from Felicity Huffman. If this is a topic that you find interesting, track that one down instead. You’ll not only get the transgender storyline, you’ll get a more interesting movie overall with better characters and a much better plot.

Why to watch The Danish Girl: Alicia Vikander.
Why not to watch: Lili.