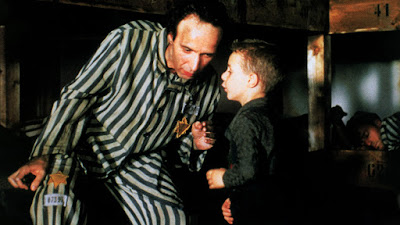 I’m fairly certain that I’m not at the end of Holocaust stories, but watching Life is Beautiful (La vita e bella) puts me one step closer. This is one that I’ve seen before—I saw it in the theater when it was originally released, if I remember correctly. It’s not one that I looked forward to seeing again. I find this a difficult film to describe. This is purely a film about the Holocaust, and yet it’s also in many ways a comedy. Director and star Roberto Begnini created a film that doesn’t attempt to hide the horrors of that period in history and doesn’t make light of it, but does attempt to create a story of love and magic within that context. It’s almost impossible to explain.

The first part of the film has virtually nothing to do with the Holocaust except at the fringes. Instead, it’s essentially a screwball romance. In Italy in the 1930s, Guido Orefice (Begnini) arrives in an unnamed Italian city to work for his uncle’s restaurant and possibly open a bookstore. He and his friend Ferruccio (Sergio Bini Bustric) look for work. Most importantly for Guido, he has a chance meeting with Dora (Nicoletta Braschi), and immediately falls in love with her. He arranges a series of meetings for the two of them, and before we know it, Guido and Dora are married and have a young son named Joshua (Giorgio Cantarini).

But, this is fascist Italy, after all, and since Guido is Jewish, we’ll be heading to the concentration camps soon enough. His son and uncle Eliseo (Giustino Durano) are sent as well, as is Dora. Not wanting his son to be scared of what is happening, Guido tells him that the concentration camp is actually an elaborate game. There are rules that need to be followed, games to be played, and points to be won, and the first person to get to 1000 points wins a real tank.

Life is Beautiful, because this is the story it tells, is very strange in terms of its tone. There are parts of it that are clearly comedic and intended to be so, but much of it is only comic to Joshua and not to anyone else, including the audience. It’s about the creation of a dark fantasy to ward off an even darker and more terrible reality for the boy. The movie took some heat when it was released for making light of the Holocaust, but it clearly doesn’t. Guido attempts to make light of things for the sake of his child, not because he somehow doesn’t understand exactly how terrible this game he has made up really is.

There are also moments in the film that truly demonstrate how perverse the situation really is. Early in the film, we are introduced to Doctor Lessing (Horst Buchholz), a German doctor living in Italy. As it happens, he is a favorite customer of Guido at the restaurant. The doctor is obsessed with riddles and likes to pose them to Guido, who gets the answers very quickly. Later, the doctor turns up at the camp and desperately wants to talk to Guido. Naturally, Guido thinks that his friend might help him survive or escape. Instead, he simply wants help with a riddle, not seeming to care or realize that Guido is literally living under a death sentence. This isn’t played for comedy. It’s tragic and terrible and is one of the most heartless moments I’ve seen in any film.

What this means is that despite the insanity of its premise, Life is Beautiful works tremendously well. Begnini has a great deal of silent comedian in him and a good deal of Jacques Tati as well. It’s a sensibility that works well for this film and story. Any good comedian has a dose of tragedy in the material, and this is all about the comedy within the tragedy. Begnini hasn’t had much of a career since, and perhaps that’s a part of this as well. There may simply be nothing left in the tank.

This is an oddball of a film, though. It’s difficult to know how to react to it emotionally. Is it terrible and depressing? Uplifting and joyful? Spiritually reassuring? Soul-crushing? The answer is yes to all of it. It is tragic and sweet at the same time, awful and beautiful, and a tale of life in the midst of death.

I put this off for a long time because I didn’t want to sit through it again. There are a few others on the list like that as well, and I realize that I need to get through them if only so they aren’t all at the end. Life is Beautiful is the kind of film that could easily be maudlin and filled with tripe, but manages to balance itself perfectly between horror and sweetness. There really is no other film like it. That’s probably a good thing for all the right reasons.

Why to watch Life is Beautiful: Among Holocaust stories, it is truly like nothing else.
Why not to watch: At some point, how much Holocaust do you need?