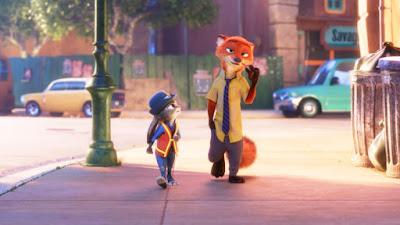 Oscar nominations are going to be announced in a couple of days, and since there wasn’t anything I really felt like watching tonight, I figured I do a little pre-emptive viewing. I think it’s a good bet that Zootopia will earn a nomination. It’s a Disney film, for one thing, and it was pretty well reviewed. Now, it’s possible that the Academy won’t want to double up on Disney in this category and that the nomination will go to Moana instead. But hey, you rolls the dice and you takes your chance, right?

Zootopia is Disney’s take on racism through the lens of anthropomorphic animals and a plot straight out of film noir. We have a world where predator and prey animals have evolved into something like a human civilization and have the ability to live side by side without killing each other. Young rabbit Judy Hopps (Ginnifer Goodwin) has dreams of being a police officer, a job that is traditionally handled by predators and larger prey animals like water buffalo. In Zootopia, a city near where Judy grows up, having a rabbit police officer is quite a novelty—she’s the first. Her police chief, Bogo (Idris Elba) is unimpressed and sticks her on parking ticket duty.

It is during her rounds that she encounters a fox named Nick Wilde (Jason Bateman), who pulls a regular scam by purchasing an elephant-sized popsicle and melting it down to resell in smaller sizes. Since Judy’s childhood bully was also a fox, she takes a hard set against Nick. Also on the job, Judy manages to collar a thief named Duke Weaselton (Alan Tudyk), who stole some flower bulbs from a shop. As it happens, there has also been a rash of missing predators in Zootopia including an otter. That otter’s wife happens to be in the police station as Judy is being dressed down for the destruction caused by her capture of Weaselton. Judy volunteers to find the otter and is given 48 hours. If she fails, she will be forced to quit. There are no leads in the case, but Judy’s detective work uncovers one—one of the last people to see the otter was her new nemesis Nick Wilde.

So where does the racism come in? Judy and Nick eventually find all of the missing predators who do appear to have gone feral. Zootopia’s mayor, a lion named Mayor Lionheart (J.K. Simmons), is implicated in the cover up, putting the mayor’s office in the hands of Bellwether (Jenny Slate), a small sheep. At the following press conference, Judy essentially blames the feral qualities of the predators on their biology, something that they can’t help. Nick feels betrayed by this, and soon after Judy quits the force and goes back home to her family’s farm. Of course the reality of the situation is a lot more complicated than what Judy and Nick have found.

There is a very weird sense of what is happening in Zootopia. The message about race is pretty clear, but the situation is very strange. We’re told specifically that predators make up 10% of the Zootopia population with prey animals making up the other 90%. That’s not far off the U.S. percentage of population for both African-Americans and Latinos. So were Judy’s comments about biology to be taken as a potentially racially-motivated comment? It’s hard not to see it as such.

And yet that 10% predator population seems to be in many of the positions of power in Zootopia. One of the hallmarks of actual racism is that it happens from positions of power and privilege—the power and privilege here seems to be equally enjoyed by animals both predator and prey. Were the predator animals somehow oppressed, the metaphor would make a lot more sense. Zootopia’s solution to the problem of racism seems to be for people to stop being racists. It’s a lovely idea, but far too simple to be reality.

That said, it’s hard not to like Zootopia for a lot of what it does well. The voice work is excellent, as is generally the case in Disney films. The film is also loaded with some very nice jokes that work on a few levels. Populating the DMV with three-toed sloths, for instance, is sure to get a nice chuckle from anyone who has spent a day getting a driver’s license. There are also some nice references to movies that parents will get and a few—like an overt reference to Frozen--that kids will like, too.

The animation is excellent as well, and again, that’s exactly what we expect from Disney. The animals look good, and there is a solid attempt to create a great deal of diversity in the animals that are depicted. And while I think Zootopia fails on its narrative with racism, it does some of the small things well. There are moments of racism that happen to just about everyone. When she is called “cute,” Judy replies that only bunnies can call each other cute and that it’s offensive when it comes from someone of another species. Similarly, she praises Nick as being “articulate,” a faint praise situation that parents may catch but that will pass over kids.

Ultimately, Zootopia was entertaining and tries hard to present a positive message. It succeeds in that for the most part, even if it doesn’t really address the real problem.

Why to watch Zootopia: Disney really does make good animated movies.
Why not to watch: The racial message falls flat.